I got my copy years ago, I havent played swat 4 so i cant compare it but i still very much love to play swat 3 single player. The weapons arent visible while you play just the crossairs. I may eventually put on screenshots, yeah. --MarkXIX 00:36, 2 June 2010 (UTC)

Your screenshots are too big

The newer M240G's do have a rail on the feed tray cover, as do the newer Bravo and Delta models and the M249 SAW. The M240G does not have a heat shield or handguard; this is one of the main identifying characteristics between the Golf and Bravo models of the M240. I assumed the Ghosts were Army since they appear to have the Army-issue Universal Camouflage Pattern on their uniforms in the screenshots. Orca1 9904 22:21, 30 January 2010 (UTC)

Thanks for the links! Those will go a long way towards making it better, I'm sure. If only somebody would add support for the 360 rumble! I guess that's a problem of the Microsoft drivers though. Glad you like the page, it should be done soon (I hope!). ManiacallyChallenged

Great work with the screenshots. BTW can you take more screenshots like this showing the respective gun in the inventory: 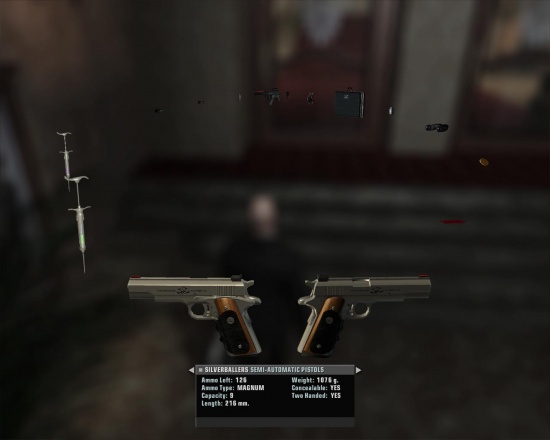 I took screenshots like these for the Hitman Contracts page and such screens will display both the TPS view of the gun along with stats.--SB2296 08:21, 17 August 2010 (UTC)

Don't worry about that, there aren't any such prohibitions. There are many such pages showing guns in the inventory menu (including Modern Warfare 2). Feel free to upload any such screenshot as long as it can be seen in some form.--SB2296 16:51, 17 August 2010 (UTC)

some high resoulution pictures of the in-game weapons have been added to this article--Gunfeldbach 13:28, 30 October 2010 (UTC)

You don't need separate sections for ammunition. Please merge them into other sections or remove them. MoviePropMaster2008 01:15, 3 January 2011 (UTC)

Sorry, but this video game is subject to deletion because all firearms seen are fictional and cannot be linked to any real firearms. --Ben41 18:40, 4 January 2011 (UTC)

re:Why would "British Bobbies" intentionally hobble themselves for firepower?

You raise some interesting points there. I'll see if I can answer them.

The C96 may technically be a WWI weapon, but it's still frequently associated with WWII. Most of the weapons in his works are based more on author appeal than anything else (although I'm pretty sure that aside from the C96 and MG42, most of the guns in Stray Dog were more a matter of him finally having actual blank-converted weapons available due to it being shot in Taiwan instead of Japan).

The C96 is Oshii's favorite pistol, hence it's inclusion in the Kerberos Saga; it has little-to-nothing to do with it being in Star Wars. And the gas mask effect isn't ripped from Star Wars either; if you compare the two, you'll notice that the Panzer Cops' breathing sound has more of a hiss to it, akin to what a real gas mask sounds like.

I might make a page for the Fast Food Grifters movie at some point, but right now I'm trying to fix the anime section's inexcusable shortage of Black Jack (I'm trying to fight the ever-rising tide of moe crap). I've also considered the possibility of an Oshii category, but I'd rather wait till more of his filmography is here (especially more of his live-action work) before running it by an admin.--PistolJunkie 01:17, 10 September 2011 (CDT)

First off, thank you for the message. I appreciate you not getting pissed that your page was removed but instead looking to correct the problem. I was planning to restore the page after your first message but Ben41 actually beat me to it. My main issue is that it just doesn't seem complete. Does the game really only have 4 firearms? Additionally, you need images of the guns themselves, just like the other pages you've done. Again, thanks for not getting pissed off but instead asking how you can fix the page! If you have any more questions, let me know. --Zackmann08 08:47, 28 June 2012 (CDT)

After looking into the game, I took your advice and appealed to Serellan for a console version. Now to wait and see how the community there receives it. Spartan198 (talk) 10:55, 6 April 2013 (EDT)

Much as it's an interesting hypothesis, Sam's sheath isn't really much like a real captive bolt gun; I'll rewrite that section to play it down a little in, um, roughly two weeks when the PC version comes out and I can replace all the caps with full HD versions. Evil Tim (talk) 12:45, 30 December 2013 (EST)

Well, a lot of the stuff about swords is a little irrelevant since there's no way Sam's sword could go together like a normal katana and still have the HF blade functionality; if the blade vibrated incredibly quickly the guard would have to be attached to the weapon securely or it would disintegrate. I doubt the port will be as lazy as that considering it's already been revealed that there's an option to increase the number of parts the game generates (so presumably no more stuff like half of Excelsus suddenly vanishing), I doubt they'd do something that complicated and not bother to add other graphics options too.

As for MGS4, I do still intend to do it, I've just been a little busy with other things (quitting energy drinks and switching to electronic cigarettes, among others) and it'd be quite a substantial investment of time to redo all of the caps on that page and get the ones I missed (like the military hardware in the final speech, there's a few things in there that aren't present elsewhere). I haven't forgotten, it's just going to be a time when I have a lot of free time. Evil Tim (talk) 01:31, 3 January 2014 (EST)

Is this animated or is it rotoscoped? And please remember to crop the black bars before uploading. --Funkychinaman (talk) 01:19, 9 March 2014 (EST)

Thinking about it, didn't Big Boss canonically leave the original Patriot on The Boss' grave? If so, then I'd assume he'd have to develop a new one, I guess he fitted the kickin' sound system to it between Peace Walker and 4. Evil Tim (talk) 09:15, 18 February 2015 (EST)

Thanks for the kudos. I'd love to tackle The Lone Gunmen, but I don't have access to it. I thought I might next touch up the Millennium page (along with some other stuff), mainly with a technical overhaul on the gun info (there's cross-over with the weapons from the Vancouver-filmed portion of X-Files) and some formatting. Would like to add caps and all to that too, but same problem, don't have access to the series at present.

You're more than welcome to go ahead with starting a TLG page yourself if you're so inclined - I'll be happy to help any way I can. As for a Chris Carter category, well, I suppose there's enough there with three series and two films that can be accounted to him on the site, but most of that is X-Files, which we already have a template for (though not an actual 'X-Files' category, so might wanna see about that as well or otherwise). In any event, not really my call - I'd suggest checking with one or a couple of the Admins (funkychinaman and/or Ben41 would be my first picks) and seeing what their word on the matter would be. StanTheMan (talk) 00:47, 28 March 2015 (EDT)

I had tried to play Silent Hill 4, but complete only a few locations: it's very hard game. So, I ask my friend to give me screenshots with the SMG and he gave me it.

I played Silent Hill 2 many times, and complete all endings. But, I have only russificated version of this game, that was licensed in Russia, with non removable subtitles. So, I can't remove it. I can crop the screenshots, but it will be disgusting. Pyramid Silent (talk) 09:05, 26 October 2015 (EDT)

I read Russian fan site about Silent Hill. If you want to get SMG for Eileen, you should complete the game one time with the score 90% or better and start the new game. You can finf it in the appartaments world, appartament (room) #102. Pyramid Silent (talk) 09:40, 26 October 2015 (EDT)

About screenshots cropping in Silent Hill 4, I know, that rules request cropping black bars. About saves files - you can absolutely legal downloads save files (it's less than one megabyte sizes) and instal it to the game into the save folder. I also didn't continue to play Silent Hill 4, due it's not interesting game for me. Pyramid Silent (talk) 05:56, 1 November 2015 (EST)

I'd say wind them back or at most cut the top bar off, you shouldn't crop out "black bars" if there's things in them. And the bottom one is the, um, Peacemaker Carbine or something from Bulletstorm, which is never going to have a page here :P One above it is obviously a Lancer from Gears of War. Evil Tim (talk) 05:08, 22 November 2015 (EST)

Re: Death to Spies

Don't know if you remember, but you recommended on The Road talk page that I watch Threads. It took a while, but I finally did (found it on a free streaming platform) and I can see why it was only broadcast a few times. "Horrific" doesn't even begin to describe the quality of life depicted after a wide-scale nuclear exchange. Considering what I've read regarding its production, though, it surprises me that they opted to decidedly have the USSR be the first ones to use nukes. A more ambiguous approach seems like it would be better for the film's message of, basically, "We all lose." Spartan198 (talk) 09:53, 11 May 2021 (EDT)