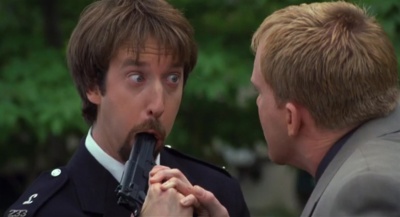 Tom Green as Gord Brody in Freddy Got Fingered (2001) with a Beretta 92FS.

Tom Green is a Canadian-American comedian and actor whose best known film roles include Freddy Got Fingered and Road Trip. He was briefly married to Drew Barrymore and cameo'd in 2000's Charlie's Angels.