The Titan is a 2018 science fiction thriller directed by Lennart Ruff, starring Sam Worthington and Taylor Schilling. The film was released internationally by Netflix on March 30, 2018.

In 2048, Earth is dying. Fighter pilot and family man Lt. Rick Janssen (Sam Worthington) volunteers for a series of genetic experiments to prepare humanity for a new home- Titan, the largest moon of Saturn. The experiments grant him superhuman abilities, but also cause unexpected and horrifying changes.

The following weapons were used in the film The Titan:

Spanish soldiers guarding the NATO base are primarily armed with the M4A1 assault rifle, as opposed to more appropriate G36-series rifles. The rifles are seen equipped with Aimpoint or EOTech sights, laser sights, and flashlights. Some rifles are without accessories and with a full stock.

A black-dressed soldier opens fire at Lt. Rick Janssen (Sam Worthington) when he attacks them.

Spanish soldiers retrieve their M4A1s from an armory when mutated soldiers become aggressive to civilian and military personal.

Soldiers guarding the last mutant. One of the soldiers has a rifle without accessories and with a full stock and the second a classic one.

A line of soldiers stand ready to shoot at Janssen (Sam Worthington).

They finally change target when Colonel Solano (Francesc Garrido) draws his handgun at Prof. Collingwood (Tom Wilkinson), despite Janssen wounding or killing a few soldiers before and during his chase.

Some soldiers are seen with the Colt Model 933.

A NATO soldier on patrol carrying a Colt Model 933.

A black-clad special response team uses an AWP as a tranquilizer rifle against the out-of-control, mutated Tally Rutherford (Nathalie Emmanuel). The AWP is inaccurately shown as being able to fire darts.

A pair of soldiers shoots tranquilizer darts at a mutant soldier.

Other angle of the same scene.

All of the Spanish soldiers are equipped with handguns. They are only seen holstered and when Colonel Solano (Francesc Garrido) draws his own, the shot is not very clear. The shape of the grip indicates they may be the Smith & Wesson M&P9, as opposed to the Spanish Army-issued Heckler & Koch USP. 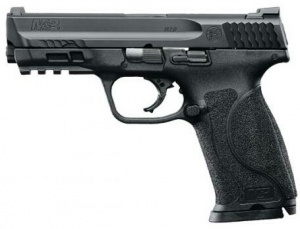 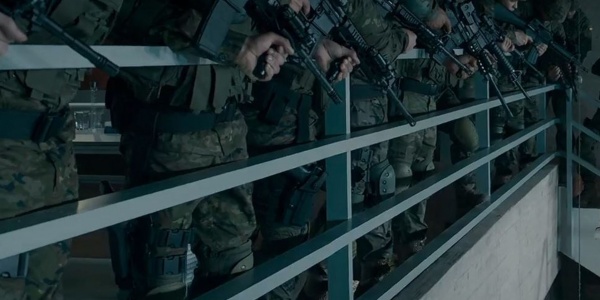 Close-up of a soldier's holstered pistol.
Retrieved from "https://www.imfdb.org/index.php?title=Titan,_The&oldid=1511955"
Categories: