From Internet Movie Firearms Database - Guns in Movies, TV and Video Games
(Redirected from The Double)
Jump to navigation Jump to search

The Double is a 2011 thriller about a Russian spy, code-named Cassius, who begins killing again after everyone thought he was dead. The film stars Richard Gere as a retired CIA agent and Topher Grace as a young FBI agent who team up to investigate the new string of assassinations.

Visit the Discussion section for information on Cassius' garrote watch.

The following weapons were used in the film The Double:

Brutus (Stephen Moyer) grabs a Glock 19 off a cop when he makes his escape from the hospital. He later drops it in his fight with Paul Shepherdson (Richard Gere).

Brutus enters the hospital parking garage with Glock in hand.

A full-size Glock 17 is used by Agent Ben Geary (Topher Grace) as well as other FBI agents throughout the film instead of a Glock 22 that real FBI agents use. Agent Geary uses the Glock to wound Bozlovski (Tamer Hassan) during the climax.

Oliver (Chris Marquette) has a Glock 17 holstered as he discusses the case with Geary (Topher Grace).

Geary searches for a Russian agent. 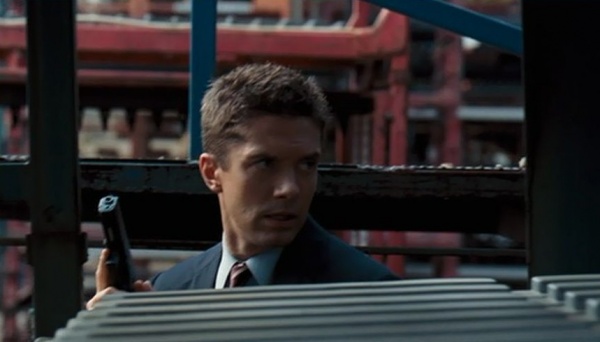 The small barrel size indicates this is a 9mm instead of a .40.

Paul Shepherdson (Richard Gere) uses a Beretta 92FS throughout the film, most notably when threatening Amber (Stana Katic) and during the car chase at the ship yard.

Paul grabs the Beretta which has miraculously remained in place despite his driving.

Paul opens fire on Bozlovski who is in a stolen port authority car.

Paul's bullets spark on the car.

Bozlovski (Tamer Hassan) uses a SIG-Sauer P226 to kill the Mexican guide at the border when he sneaks across with other Russian agents. He uses it again at the end of the film to shoot Agent Shepherdson.

Bozlovski gets shot in the leg by Agent Geary before he can kill Shepherdson.

Bozlovski is distracted by Shepherdson when he comes running into the room and shoots him.

The crimpnose blank fired by Bozlovski's SIG-Sauer. It appears to be a .357 Sig round.

A revolver is used by Bozlovski's henchman Leo (Yuri Sardarov) to hold Paul (Richard Gere) hostage until Paul disarms and kills him.

The FBI SWAT team that finds the arms shipment are carrying M4s.

A shipment of AT4 rocket launchers are discovered by the FBI SWAT team at the docks.

CIA Director Tom Highland (Martin Sheen) inspects the AT4s. Note the agent's M4 on his back.
Retrieved from "https://www.imfdb.org/index.php?title=Double,_The&oldid=975099"
Categories: