A Mossberg 500 Persuader model is used in the webisodes. Curiously it features a ghost ring rear sight and a bead front sight. It is referred to as holding eight, including one in the chamber, but in real life it could only hold six. 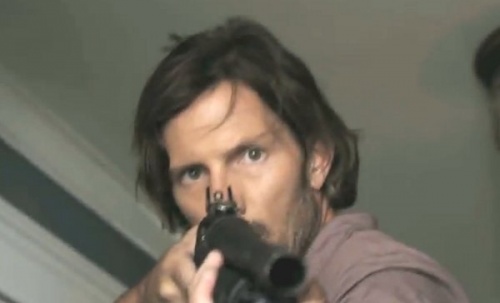 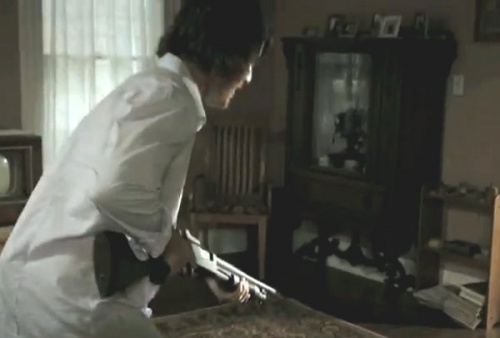 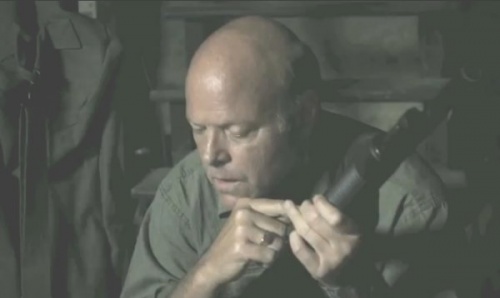 Rex Linn as the doomed neighbor: "She holds eight...including one in the chamber."

A Beretta 92FS Inox is used by Hannah (Lilli Birdsell) is the last webisode. 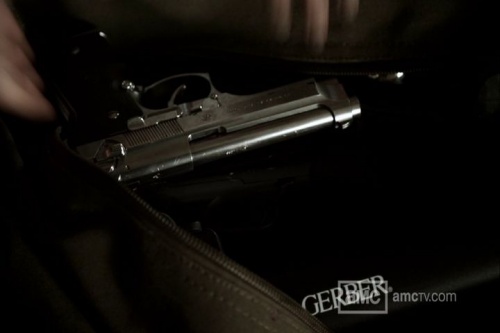 The Beretta 92FS Inox seen in a bag along with Gerber Gear. 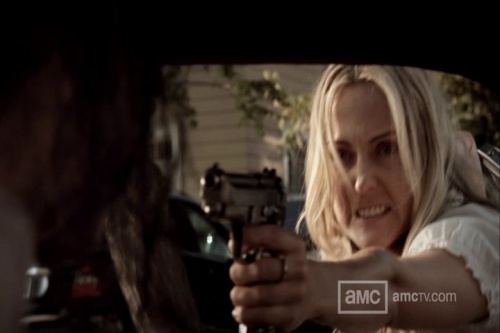 Hannah about to fire the Beretta.

W0W lot of pics of guns of TWD wikia

I was twd wikia they have pages for guns the colt python page has A TON of pictures some on here but others not some from season 1 some from season 2 and some of the Beretta from season 3 but some good shots other pages too the pages with all the links is the " weapons " page some guns have pages some don't I'd upload don't know how though hope someone uploads em there's several really good pictures heres a link http://walkingdead.wikia.com/wiki/Weapons --Blueboy1600 (talk) 22:54, 21 October 2012 (EDT)

Yeah most wikia's that try to know weapons use imfdb but there a still others that aren't on here and considering there a some of em on the page right now that weren't before i guess not " all " of them were already from here look at their mossberg 590 page plenty of good pictures on there and other that aren't from here hell out of the 14 on the season 2 part none are from this page .... --Blueboy1600 (talk) 20:09, 22 October 2012 (EDT)

What is obvious is that they are taking the gun pictures directly from this site, something that's completely frowned upon here. As for the rest of screenshots, maybe someone's not done with Season 2 yet and hasn't put the screenshots up. This page had not been worked on for months and now you're concerned that not all the weapons are on there? --Ben41 (talk) 20:27, 22 October 2012 (EDT)

I never said just because they took some pictures from the site it was right i said there were plenty of pictures that aren't on here I was just trying to be helpful by letting people know there were plenty good pictures on there that aren't on here second i never said not all the weapons were on here I SAID THERE WERE A LOT OF GOOD PICTURES read the topic "WOW lot of pics of guns on twd wikia" maybe i should have been more clear some are from here but not all are otherwise i wouldn't have said anything PS this page walking dead season 2 hasn't been up for months it was just created 5 days ago by you and i just noticed the pics on twd wikia ... --Blueboy1600 (talk) 23:06, 22 October 2012 (EDT)
The original Walking Dead page had very few Season 2 images and is currently being worked on. I would appreciate it if you wait until it's completed to judge. You may want to make your comments easier to read, because it sounded like you want the page to be a certain way. --Ben41 (talk) 00:23, 23 October 2012 (EDT)

I never said it wasn't good enough i said lot of good pictures on twd wikia I made it very clear, YOU misinterpreted what i said. Not easy enough to read i made it very simple you misunderstood and now your trying to blame it on me i never gave any indication i wanted it a certain way i wanted to let people know there were good pics on there i never insulted the page or said anything of the sort this isn't rocket science it was me trying to let it be known there were several good pics on there.There is that easy enough for you ? PS i meant many of them weren't from this page not meaning this page wasn't good enough but that they had plenty of good pics not from this page or the others --Blueboy1600 (talk) 02:11, 23 October 2012 (EDT)

In case it isn't clear enough, the great many of their screenshots were copied directly from this site. That particular site doesn't even bother changing the names of the screenshots that I put up when they put it up on their own website. --Ben41 (talk) 21:54, 26 October 2012 (EDT)

I am one of the people on the TWD Wikia, who made most of the weapon-stuff on there. I do not copy your screenshots, though. There's a gallery for every single character and episode, so that's where we have the pictures from. Weapon pics is taken from here. I am sure the Walking Dead Wikia is not the only wikia, using imfdb to get weapon information. --Creed (talk) 05:55, 27 October 2012 (EDT)

Not every wikia steals pretty much all their images from imfdb. I can tell you that every gun image on that wikia is from imfdb. Maybe it's not you, Creed, but I can also tell you that pretty much every screenshot that the user BanishU and Kaffe4200 put up in the last two weeks are the ones that I just put up since they're the exact same filenames! I sure that Kaffe4200 can tell me what other site he got that image of Shane's Mossberg, right? A lot of the gun images have been copyrighted by MPM2008 and he doesn't appreciate their use without permission. --Ben41 (talk)

It's because someone is claiming that they did their own work when it's obvious that it's from someone else's hard work. This site cracks down when users summarily copy summaries from other sites and would expect other sites to try to do the same. --Ben41 (talk) 15:20, 27 October 2012 (EDT)

Hey, this is admin lukesav1998 of the walking dead wiki on one of our users accounts. I would like to find a way to stop the fight between the two wikis. Would you be okay with it if we gave credit to your wiki by listing it as a reference on each page? --KJ (talk) 15:38, 27 October 2012 (EDT)

Okay I have answers and a question

Alright you remember how we thought that shot gun Glenn had during the farm zombie massacre we thought there was a deleted scene were the vato's hideout was overrun.Well i just watched the deleted scene on Daryl said every one was shot execution style then it was overrun and the people who did it took everything they wanted so where did they get that shotgun since they gave it away not a scene were they pick it up.Heres the link http://www.youtube.com/watch?v=MFOQZ6Sr_dI.

In the Season 1 webisodes, Hannah is seen with a handgun. I can't recognize it. As stated above, the shotgun used in Domistic Violence and Neighborly Advice is a Mossberg 500. In the Season 2 Webisodes, a version of the AK-47 appears in the background, and also another assault rifle. Does anyone know which guns these are? --Creed (talk) 11:18, 25 October 2012 (EDT)

I think its a Beretta 92FS inox do to the finish she gives it to the daughter if I'm correct otherwise she would have shot herself The TWD WIKIA labels it that but I didn't get it from there. As for the AK i think its the same from the TWD season 3 used by Carol the AKMS since the season 2 webisodes were created to hold us over .--Blueboy1600 (talk) 01:14, 26 October 2012 (EDT)

One of the members of Dave and Tony's group had a rifle that doesn't seem to be on the page. It's seen only briefly in S2E9 "Triggerfinger" when Rick looks out the window and sees three guys conversing about Dave and Tony. Spartan198 (talk) 10:20, 17 March 2013 (EDT)