Smith & Wesson No.3 Russian Model Pattern I - .44 Russian. Smith & Wesson Pattern I revolver (in Russian Revolver Smita i Vessona, Obrazetz I) was Russian service name for US-manufactured revolvers while Russian-manufactured revolvers were indexed as Pattern II and Pattern III. Pattern I revolvers can be identified by the shape of the frame and the absence of the spur on the trigger guard. This is most likely a modern replica, since the original Model 3 had an 8-inch barrel.

One of approximately 250 New Model No 3 revolvers (.44 Russian) made for the Australian Colonial Police. The Australian Police carried the No. 3 from 1882 - 1912. They were sold to an American gun dealer in 1959. The Australian Police specifically ordered all the models to be equipped with rifle stocks. They are found in very good condition and command top dollar 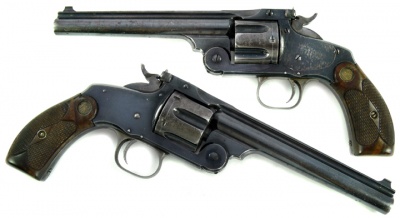 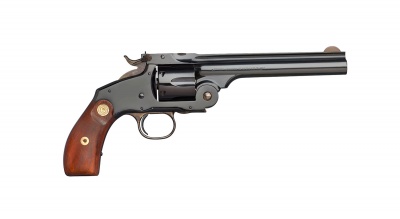