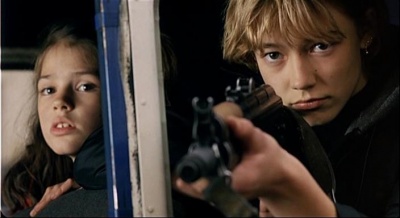 It cannot be an AKMSU since this gun never appears in Soviet/Russian films. As for me, this gun looks like an AKS-74U with blank firing muzzle adapter. Greg-Z (talk) 11:19, 1 December 2013 (EST)

Two things about the rifles that you describe as having a scope. Firstly, these are not scopes but target aperture sights (basically a disc with a tiny hole in the middle with a lot of adjustment). Secondly, I don't think they are air rifles as they have a bolt handle at the rear and you can see an ejection port and a bolt that appears to have an extractor. --commando552 (talk) 10:24, 1 December 2013 (EST) 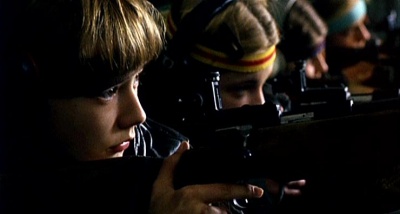 Sveta (Oksana Akinshina) fires IZH-38 with a scope at the competition with other girls.

Guys, thanks for all the corrections and sorry for the mistakes. Came up with this article in the night, making it from a scratch and using screenshots that I've already found on the internet. I had some suspicion on both the AKS variants difference and that rifle with a sight is not IZH-38 (I think it's trigger guard that tricked me). As for the sight/scope situation it's my terminology fault - despite having a good vocabulary and generally being not a bad English speaker and writer, I still have them in English sometimes with some words. That's why thanks for explaining the difference. In fact I hope that someone will improve the article eventually, because I'm not that deeply attached to this movie. I hope my eventual long-planned articles will be better then this improvised thing. --Kloga (talk) 12:49, 1 December 2013 (EST)