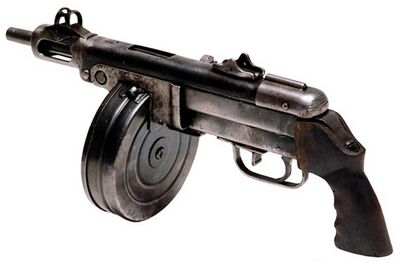 how many times must I to write this PPS 43 not PPSh ,it was build by Sudaiev not Shpagin.

Anyone know why the muzzle of this particular PPSh is different from the usual vented appearance?--AgentGumby (talk) 00:04, 14 December 2016 (EST)

Move the KP-31 and the PPD on another page

I absolutely agree. PPD and PPS is completely independent weapon that has nothing to do with the PPSh, except cartridge. They deserve their own pages. You also need to mention that the stick magazines used in the PPSh only since 1944, not 1942, as written here. In 1942, PPSh has changed only sight, but not the magazine. Flexo 10:55, 19 November 2011 (CST)

I speak not about when the GKO (SCD) resolution has been written, but about when these magazines have appeared in field army. I didn't see any photo denying my words. At least even in 1943 (for example during Kursk fight) these magazines can't be seen (I am assured, you know that photos of Red Army are rather easy for dating if you know dates of change of a uniform and rules of carrying of awards). Flexo 14:11, 19 November 2011 (CST)

I will examine my collection of wartime photos. As far as I remember there were photos of Red Army soldiers with PPShs with stick magazines during Stalingrad battle. And quick search in internet give this photo. It is battle for Caucasus mountains, early 1943. Greg-Z 01:10, 20 November 2011 (CST)

My friend, do you believe what in the "Pavlov's building" there was a photographer? Ahahah... This photo can be carried absolutely to any period of War. ...Two soldiers shoot in ruins... For example it is storm of Kenigsberg? Why not? ...I will believe that it is 1942 only if I see signs of a military rank on a collars.

I think the Finnish sub-machine gun deserves it's own page. Or dump it with the MP18 page, too. After all, it was the gun the Soviets based their PPD and PPSh. Or at least it should be on top of the page.

Ps. Yes, some PPSh's were converted to 9x19mm Parabellum, especially by the Finnish Army. They also sometimes simply used them as they were. It would have been stupid not to, since the Finns were sometimes so deep in their forests that Parabellum ammo would run out. Plus, it would have to be preserved for the KP/-31's. --Warejaws 15:21, 6 January 2011 (UTC)

Hi. I made a page for Cryostasis a few days ago. The PPSh-41 in it strangely keeps firing even when the trigger is released. (It fires about 4-5 rounds.) I read somewhere that this happens with the real PPSh too. Could anyone confirm this? If it is true, then I would include it on the game's page and also this could be some really realistic modeling/programing never seen before. Thank you. bozitojugg3rn4ut 14:49, 15 March 2011 (CDT)

The PPSh is a simple blow-back design that fires from a open bolt. There are several factors that would cause the gun to 'run away'. Under-powered ammunition would cause the bolt to short-cycle. Meaning the bolt isn't traveling far enough rearward to catch the sear. The weapon could be dirty and have foreign matter in the trigger group causing the sear to react slowly when the trigger is released. There could also be foreign matter in the path of the bolt's recoil, preventing it from engaging the sear. That being said, the PPSh is extremely reliable under extreme conditions. I have handled, repaired, and fired many PPSh's over the years and have never witnessed one run-away. The worst culprit for jamming is the drum magazine. They don't hold up well to rough handling. The curved 35rd box mag is superior. What you are experiencing in your game is simply a game designer who doesn't know weapons. They don't act like that in the real world. But I find that true of most all video games. 04:48hrs, 26 Sept 2015,--Pak43

Is the K-50M really a Vietnamese copy, it looks nothing like it.--Gunner5

The basic upper and lower receiver is the same except that the barrel jacket is shortened and a AK-type front sight base is fitted. The wooden butt stock was done away with and replaced with sheet metal enclosing the lower receiver and a AK-type pistol grip added. A steel wire, collapsible butt stock, based on the French MAT-49, was added. Though it could still take the drum magazine, the intended mag was the curved 34 round PPSh magazine. The drum mag could not be used with the stock in the retracted position. --Pak43

The screencap below has bottlenecked shell casings coming out of a Suomi. I have a feeling they're just CGI shell casings, but I just want to be sure. Thanks. --Funkychinaman 13:02, 5 July 2012 (CDT)

The casing being ejected from the weapon look to be 9mm blank cases. The cases are full-length blank rounds. The overall length of the live 9mm round is reproduced for reliable feeding. There is a shoulder formed on the case so it will properly head-space in the chamber.

And the award for most bizarre use of the PPSh: 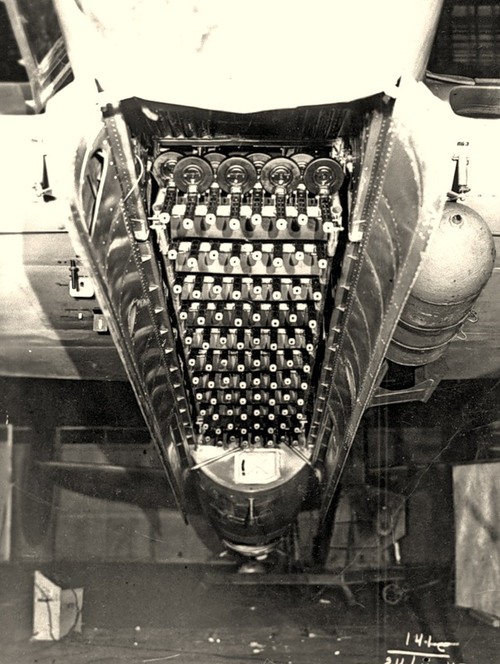 It's a Soviet plane Tupolev Tu-2Sh, an experimental version of Tu-2 bomber. A battery of 88 PPSh was mounted in the bomb bay. The idea was to provide a massive fire against soft targets. Greg-Z (talk) 02:53, 26 September 2015 (EDT)

A similar idea was floated around the United States Army Air Corp in the late Teens/early 1920's using the Thompson Sub-machine gun. I don't believe it got past the Concept phase. 04:53hrs, 26 Sept, 2015, --Pak43

Pretty sure there would be jamming issues when firing the weapon while grasping the magazine, right? There are multiple photographs of WWII soldiers either using this method with the drum magazine, or holding the part behind the magazine (though holding the barrel jacket is inadvisable due to high fire rate). --Ultimate94ninja (talk) 16:20, 25 December 2017 (EST)

I've never even held one of these guns let alone fired one, however my guess is that it would not be very susceptible to feeding issues based on how you were holding the magazine. The PPSh uses a bottlenecked cartridge so there is a lot of tolerance for the round feeding as the bullet is a lot smaller than the back of the chamber so it acts as sort of a funnel. I also think that the drum mags tended to be a relatively tight fit (to the point where they were not really interchangeable, you had the one that came with the gun which worked and if you wanted another there was a lot of trial and error. If you have a loose magazine I believe you can have a lot of problems feeding, but I think that this is the case if you are holding it by the drum or not. --commando552 (talk) 18:47, 25 December 2017 (EST)

The box mag seems to be reinforced at the top so I'm not sure if even that would cause problems: the box was overall a bit crap at first since it was only 0.5mm steel, but they changed that to 1mm thick and that basically solved every problem the PPSh mags and drums had. Regarding misfeeds, you'd be more likely to cause them by actually loading the drum to capacity since it started to complain if you put more than about 65 in it. Evil Tim (talk) 05:34, 26 December 2017 (EST)

Yeah, that's one point, you're supposed to support the base of the drum mag with your palm, grasping the side of it like in those CoD shots wasn't what they trained people to do. Not that this seems to have stopped anyone from doing it anyway, and it doesn't seem to have caused feeding problems holding it the "wrong" way. Evil Tim (talk) 05:52, 26 December 2017 (EST)