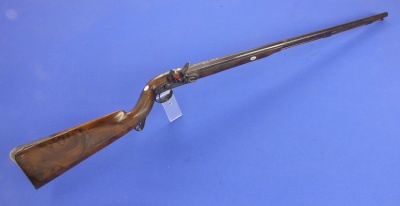 English flintlock gun with a cross-over stock for left eye dominant made by Frd. And. Buresch circa 1800

The "Spanish/Spanish-Colonial" or "Madrid type" is a specific form of stock on some late 18the century Spanish miquelet muskets. This shape is unique and distinctive and has nothing in common with the more conventional design seen on the standard Spanish M1752 musket. According to sources, this design was "The type of long-gun used by both Spanish troops and settlers, in the New World; and similar to examples found in Florida". This design is some times (rarely) seen on Italian or Portuguese weapons. Here are some references to this obscure design: