R80 Colt Monitor - The Colt Monitor was the most modern of the Browning Automatic Rifles. The bipod was deleted but it had a pistol grip, an 18-inch barrel and a 4 inch Cutts compensator on the end. It weighs in at around 16 lbs.The key changes in the R80 (in comparison to the BAR) came in reducing its barrel length and associated gas system by several inches, but adding a highly engineered muzzle compensator known as a Cutts compensator. The compensator, in combination with the pistol grip made the R80 well balanced and easier to handle in full-auto fire.

The other key attribute, while overlooked by some, was the reduction in weight by near 4.5 pounds. A 20 pound rifle reduced to 16 was a major step in portability. Colt only made 125 of these between 1931 and 1940. The FBI purchased approximately 90 of them. I would imagine that means a few have been held onto and are in storage for historical purposes. The rest were probably crushed and melted down. Ugh. The Federal Government. Incidentally for anyone wanting one of these prices are now running between $100,000 -$150,000. And that's just an estimate. They are very well made. Excellent quality. One of these was used by Frank Hamer when he ambushed Bonnie & Clyde. --Jcordell (talk) 14:58, 7 January 2013 (EST) 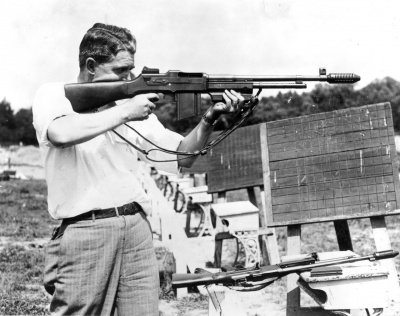 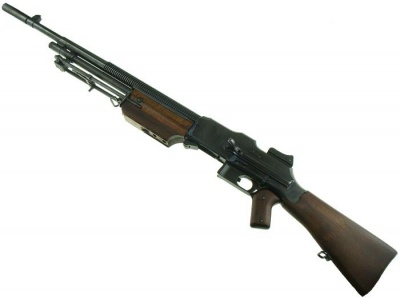 I hate to sound like a gun grabber, but I genuinely don't know what practical use someone could have for a full-auto only rifle that fires .30-06. Unless you're a private security guard or lived in a very rough neighborhood, I don't know under what circumstances a BAR would work that a Thompson or M1 Garand wouldn't be better (and a lot cheaper to feed, obviously). I sell ammo for a living, and .30-06 is really expensive to this day; I can't imagine trying to outfit a BAR for sustained use on a normal person's income. That said, I feel like the impracticality of the rifle should preclude it from being banned, since it's not something the average criminal will even be able to use, due to the prohibitive cost of ammo. I could be wrong on that last part, though; I don't know what .30-06 cost back in the 20s and 30s. --That's the Way It's Done (talk) 14:33, 25 September 2016 (EDT)

In the early 1930's the so-called "motorized bandits" (Bonnie & Clyde, Dillinger, Pretty Boy Floyd etc) were wearing body armor and often driving vehicles made of heavy gauge steel. The average police officer back then carried a .38 Special revolver or even a 32 caiber revolver. IF they carried a long-gun it was usually a Winchester in 44-40, 32-20 or 30-30 (maybe) and maybe a twelve gauge shotgun usually loaded with buckshot or even birdshot. Most of those loads couldn't penetrate the steel autobodies and body armor.Even the 44 Special and 45 ACP had some issues which brought about development of the 38 Super (1929), 38/44 High Velocity (1930) and the .357 Magnum (1935), but I'm digressing. The 30-06 would punch through as well. The bad guys were also using Thompsons and Browning Automatic Rifles which they often stole from National Guard Armories. For awhile the bad guys had the technological edge over American police officers. Colt marketed the Monitor to law enforcement for just that reason and didn't really seek the private gun-owner though they could legally own them at the time.--Jcordell (talk) 16:32, 21 November 2016 (EST)

Do you mean use then or now? For now, the use of one would be the same for all the other transferable machine guns, which is just cause(potentially as an investment). It would be expensive to feed, but so are most of the autos these days. As for then, BARs didn't have all that much of a practical use by the regular joe, as did most machine guns. That is why most people never owned an auto. Pistols, shotguns, and rifles were the go to for the average person. --Zombiedrd (talk) 22:15, 25 September 2016 (EST)

I'd subclassify this much closer to a SLR sorta like like that of semiauto only FALs, SKS, etc, but since we don't have a category of that sort, well.. I will say this, it can't be an 'assault rifle' due to the use of a 'full-size' rifle caliber, otherwise we'd classify the original BAR as such also. I'm sorry but it not being chambered for a full-size cartridge is a characteristic that it must have to be classified as such, end of. It also isn't a 'battle rifle' as the general use of the term here isn't just about caliber/characteristics but also to denote weapons that were standard- or mass-issue for battle forces, which this also is not. StanTheMan (talk) 14:58, 28 January 2017 (EST)

Not that I consider it as an assault rifle either, but the thing is HCAR stands for Heavy Counter Assault Rifle, so I sort of ran with it at first. As for adding it as a section to the BAR page, I don't know; I felt that it was a new system based on the BAR and not really considered as an actual variant of it. But yeah, I don't have anything against the idea of merging them. --Ultimate94ninja (talk) 18:50, 28 January 2017 (EST)

The BAR could be categorized as an "Automatic Rifle" like the niche the M27 IAR was intended to fill. Maybe this HCAR could be put in its own "semiauto-only rifle" category since there's little chance of it being adopted by a national military force. --Mazryonh (talk) 19:03, 28 January 2017 (EST)

I've listed it as such for now. The battle rifle category is the first that came into my mind before, but like STM said it's probably not officially one. --Ultimate94ninja (talk) 08:32, 27 February 2017 (EST)

I, for one, believe that due to its characteristics, it should probably just be thrown under the Battle Rifle category. I mean, it's not actually likely to be adopted, sure, but as far as technological descriptions go, I'd say it fits. Pyr0m4n14c (talk) 09:03, 13 May 2017 (EDT)

To simplify things, the way it works functionally is that if the rifle looks kind of like an assault rifle and is chambered in an intermediate calibre like 5.56x45mm it goes in the "Assault Rifle" category, if it is chambered in a full power cartridge like 7.62x51mm or .30-06 like this gun it goes in the "Battle Rifle" category. Similarly, the ASh-12.7 and MDR are in full power cartridges, so they go in the "Battle Rifle" category. As for "Assault" being in the name of this gun, that doesn't make it an assault rifle. If you break down the name it actually means Heavy "Counter Assault" Rifle, meaning that it is optimised to respond to assaults rather than it being an assault rifle. All that being said, I really don't think this gun warrants its own page rather than it just being a section on the BAR page, as it is just a modernised BAR isn't it? --commando552 (talk) 07:01, 14 May 2017 (EDT)

Also, to me, an entire page dedicated to a weapon that both A) is a modernized version of an existing weapon, and B) only has a single listed appearance in any sort of media, seems kind of excessive. Even the MR-C, the page for which is set up in the same manner as fictional weapons because it never showed up officially outside of Ghost Recon, has at least two appearances within that series. Kadorhal (talk) 19:32, 14 May 2017 (EDT)

I'm in favor of categorizing it under Battle Rifles should it remain a separate page - That said, I'm also still in favor of merging this into the existing BAR page. StanTheMan (talk) 21:23, 14 May 2017 (EDT)

Moved. I noticed that it lists Full Auto as a fire mode? Is this correct? I can't imagine ANY military or law enforcement agency would ever adopt the HCAR, at least as long as it's only chambered in 30-06. --Funkychinaman (talk) 23:37, 14 May 2017 (EDT)

I looked up a few videos, and I haven't been able to find anything suggesting it's full-auto capable. Hell, every video I bothered watching seemed to have the camera positioned in such a way as to actively obscure the movements of the shooter's trigger finger, which seems suspicious to me. Kadorhal (talk) 06:13, 15 May 2017 (EDT)