http://www.youtube.com/watch?v=L_CaerYv28Q same Kahr that he carries i presume.

Is there a reason that this is listed as two separate items? I realize that not all 1911's are the same, but from the screen caps, I can't definitively differentiate the two included here. -Oldwindways

I forget the episode but in the first season, after the youngest Reagan was shot, Grandpa Reagan takes of his jacket to reveal a revolver tucked into his wastband. Though it's never seen clearly I would guess it was a S&W Model 10. The one thing that caught my eye was he seemed to have the grip covered butt to frame in rubber bands. To help with the grip perhaps? --Charon68 20:37, 25 February 2012 (CST)

Is this the revolver you mentioned? Its not a great shot, but I don't think there is ever a particularly clear view of it. My guess would be that the stocks are wrapped is some sort of tape, not rubber bands. The medallion on the stocks suggests possibly a Smith & Wesson, but it is not unheard of for a Colt to have medallions as well. -Oldwindways 04:32, 27 February, 2012 (EST) 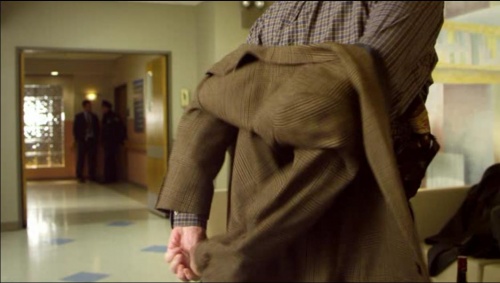 Back in grandpa Reagan's time, putting rubber bands around the butt of your revolver helped keep it from sliding down your pants, if you were carrying it in your waistband 'Mexican" style, while doing undercover work. Regards, Tecolote

Using rubber bands was the predecessor to Pachmayer and Houge rubber grips as well. I believe that Pachmayer introduced the Presentation grip in the late sixties. Probably as a response to those folks who were using rubber bands and inntertubes to help give them a better grip and help with recoil control. --Jcordell 23:34, 27 February 2012 (CST)

Although Fitzgerald Specials were also made on the Official Police frame, I think the Commisioner Reagan's revolver is the smaller D frame Detective Special.--Sg688 19:24, 25 March 2012 (CDT)

Possible but Selleck has large hands and that in conjunction with the forced perspective that cameras can impart it's hard to say. I wish we had some better screenshots of it. for now lets leave it with the OP. However I did add a coupple images of Detective Special Fitz models to the Colt Detective Special page. --Jcordell 11:23, 26 March 2012 (CDT) 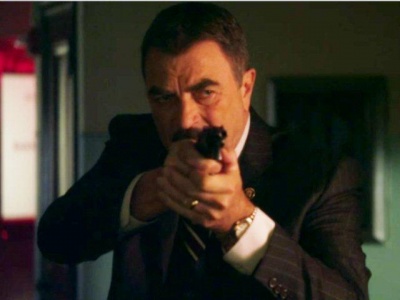 The OP and I caught nearly identical screen shots. Adjusting the brightness and contrast shows the trigger guard profile which is more oval on the DS than the OP. Selleck likes .45's; he should have a New Service Fitz! All in the spirit... Thanks. --Sg688 21:48, 26 March 2012 (CDT) 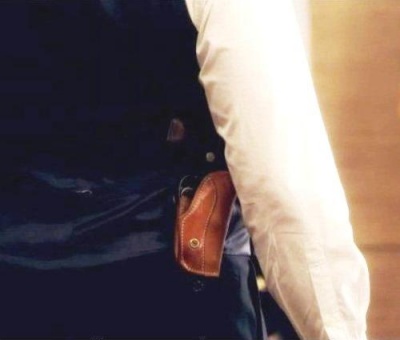 well regardless of whether it's a DS or an OP I wouldn't be surprised to learn that it is personally owned by Selleck. it's my understanding that he has a very respectable collection of classic firearms. --Jcordell 23:10, 26 March 2012 (CDT)