Sawed-off Stevens 1960s SBS with very short barrels - 12 gauge (Photoshopped). Made from one of MPM's pictures.

"Baikal" Coach Gun - 12 gauge. This is a modern replica of a double-barrel shotgun with exposed hammers from circa 1880 (allegedly of Russian origin), from The Specialists LTD. Why it was called Baikal is unclear, since this brand simply did not exist then. 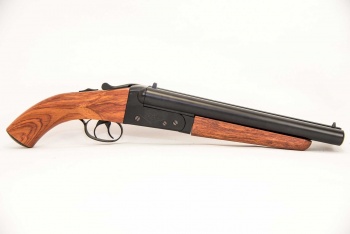 Investarm "Single Trigger" O/U Model Shotgun - .410 gauge. This is not the model used in the film Eraser, but very close.

Stoeger Double Defense Over and Under - 12 gauge 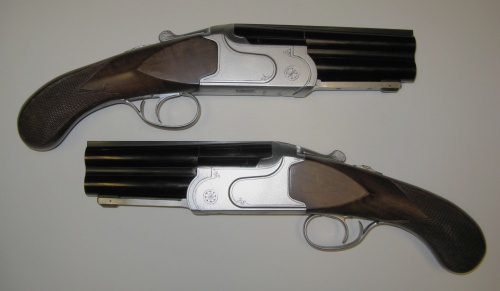 Samuel L. Jackson's cut-down CZ Redhead O/U shotguns as used in The Spirit - 12 gauge. This image was provided specially to IMFDB by a source close to the movie's armorers.

Note: Most 8 gauge shotguns were NOT punt guns. 8 gauge punt guns were rare, and in generally had a MUCH LONGER chamber than the standard 8 gauge. I don't know why hunting regulations drew the line of 'too big' between 8 gauge and 10 gauge, but it is wrong to instantly call an 8 gauge a 'punt gun'

Unless someone objects in the near future, I will be editing out 'punt gun'

Is it possible in real life to fire a sawn-off double barreled shotgun one handed effectively and with out hurting ones-self? - Mr. Wolf

A 12 or 20 gauge is relatively controllable with one hand with only a little stout recoil, but if you went up to 10 or 8 gauge, it's more likely you're going to hurt your wrist or bruise your finger in the trigger guard from the recoil. - Gunmaster45

Assuming the lever that opens the breach doesn't drive into the web of your hand. Worst case scenario: severed thumb.

Ouch! Good thing 10 and 8 gauges are pretty rare now a days, well I should of mentioned 12 gauge do to it being the most common. Wow, I did not expect a sawn-off 12 gauge shotgun to be that easy to shoot one handed. So is shooting a sawn-off 12 GA shotgun with one hand similar to firing .44 Magnum revolver or of the like with one hand? - Mr. Wolf

It's at most just a little more stout than a .44 Magnum. - Gunmaster45

Are you sure? If experience with Snub-nosed revolvers teaches anything it's that shortening the barrel increases felt recoil. Given the recoil of a normal 12 gauge shotgun, I'd imagine a Sawn-off weapon would be a nightmare. -Anonymous

The recoil from a shoulder-fire 12 gauge isnt too bad but it all varies based on the amount of recoil your used to, if your a first time shooter (or a woman, just saying) i wouldn't advise you do it, but if you have experience with marginal recoil(Revolvers, like .357s and .38s)i think youll be fine..... "CZAR"

Over Under Shotgun in Call of Duty: World at War

I don't ever remember an over-under shotgun being in this game. A side-by-side, yes, but no O/U. Someone may have gotten confused with Black Ops. Does anybody ever see an O/U shotgun in this game?

Firing both barrels of a Double Barreled Shotgun

Would firing both barrels at the same time really destroy a double barreled shotgun like some people said on this site? I would very much appreciate an answer from someone who actually knows what their talking about and not just someone assuming, thank you. - Mr. Wolf

I've fired both barrels at one on numerous occasions whilst clay pigeon shooting and from berettas to webleys it has never once damaged anything but my aim --Captain Snikt 08:26, 7 February 2011 (UTC)

Depends on the qualitity of said shotgun and maybe the age. And the ammunition used is, of course, of importance, too. I think that there are some shotguns out there were doubling is not a wise option - but so long I haven't encountered any. (Maybe because I rarely handle american made shotguns ;) ) - tiredWeasel

So would firing two shots of 2-3/4 shells with 00 Buck-shot at the same time do much to a good SBS or O/U? It probably would hurt, lol, except to someone who shoots shotguns a lot. Someone keeps posting on the Half-Life 1 & 2 pages (in the SPAS-12 section) [[1]] [[2]] that, and I quote "it has the unrealistic ability to fire two shells at once (alternative fire) which would destroy any double barreled shotgun if attempted from the shock of doing so and would render the weapon useless". I guess it's a rumor like the one about firing sawn-off shotguns and magnum handguns one-handed will break your wrist. :/ - Mr. Wolf

Yeah, that's bullshit. What's going to be destroyed? The barrels? Each barrel takes the shock of firing one round, so that guy is basically claiming it's also impossible to fire one barrel of a shotgun. The stock? What, does he have a special shotgun with a stock made of expanded polystyrene? Vangelis 18:33, 8 February 2011 (UTC)

What the guy was saying was that the shock would destroy the gun. I was questioning what part of the gun it was supposed to be able to destroy. Evil Tim 04:06, 1 August 2011 (CDT)

There are more parts then barrel and stock ^^ For example if parts of the locking mechanism are not tightly fitted and the shotgun is of (very) poor quality and well used there might be a small possibility that you destroy the locking mechanism when doubling the gun. I'm not talking about "blowing up". It IS possible - but very, veeeeery unlikely. Very unlikely. - tiredWeasel

Just to add, I've fired both barrels on one of my shotguns on multiple occasions, and no harm was done. Having said that I have also seen a shotgun break firing both barrels. The gun appeared fine immediately afterwards, but when he broke the action the barrels fell off. Turned out that the metal part at the back of the handguard that limits the pivot of the barrels (don't know the proper name) had sheared off from the recoil. This was a relatively old, loose and cheap shotgun though. On a well made and maintained shotgun, I don't think its a problem. --commando552 09:52, 1 August 2011 (CDT)

How far down can the barrels go?

How far down could you saw the barrels of a double barrel before it became unsafe? Alasdair.

They would never really become unsafe, just potentially less accurate with less muzzle velocity. They only way it would be "unsafe" is if you cut it down all the way to the chamber so that the shell was actually poking out the front and would be unsupported meaning it could break apart on firing. --commando552 16:11, 26 July 2012 (CDT)

I am putting this page into proper formatting starting at the top. If anyone wants to help they can start at the bottom of the page or help by finding years of the films. This page is huge and it is a mess.Rockwolf66 (talk) 21:10, 2 December 2012 (EST)

As I can see on this help pages, it's had newer uses at the British, French, German, Russian and American armies. But, this weapon may be used (or used) in varios another armies (near 180 countries posses own armed forces). So, I can't answer. Pyramid Silent (talk) 12:20, 1 February 2016 (EST)

As far as I know, the only double barreled shotguns that were issued as service weapons are survival weapons for aircrews, but combination rifles/shotguns are more common in this role. Double barreled shotguns were (and are now) often used by various guerilla/partisan/resistance units. Greg-Z (talk) 12:47, 1 February 2016 (EST)

In the muzzle loading and early cartridge era they were used a fair amount, particularly by cavalry, militias and police. However alternatives like lever, bolt and pump action have been around for a while now so they have been pretty much redundant for military use for quite a while now. Germany issued a few different drillings and shotguns in the two world wars, but they were not for combat, instead being hunting or survival weapons. They did however see combat on occasion. I believe that they were also used by some British forces in jungle warfare in WWII on occasion, and personnel firearms were carried by British officers on the more eccentric end of the spectrum. They have been used by police and para-miltary forces in slightly more recent times, but no proper military would use them as a combat weapon as there are better options available. --commando552 (talk) 12:49, 2 February 2016 (EST)