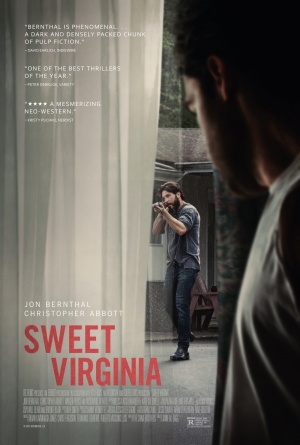 Sweet Virginia is a 2017 American-Canadian neo-noir crime-drama thriller film directed by Jamie M. Dagg and written by Benjamin China & Paul China. Jon Bernthal stars in the film as Sam Rossi, a former bull rider now running the front desk at a motel who gets too involved with some of the individuals staying at the establishment. The cast includes Christopher Abbott, Imogen Poots, Rosemarie DeWitt, Odessa Young and Jared Abrahamson. The film was released on November 17, 2017, by IFC Films.

The following weapons were used in the film Sweet Virginia:

Elwood (Christopher Abbott) uses what appears to be a Smith & Wesson Model 29 as his weapon, He uses it at the beginning of the film and later on several occasions.

Elwood (Christopher Abbott) with his revolver while paying a visit.

Sam Rossi (Jon Bernthal) displays a Karabiner 98k rifle on his office wall, explaining that his father grabbed it from a German soldier during World War II. He is seen prominently holding rifle in a posters and other promotional images.

The K98k is displayed behind Sam on his wall. 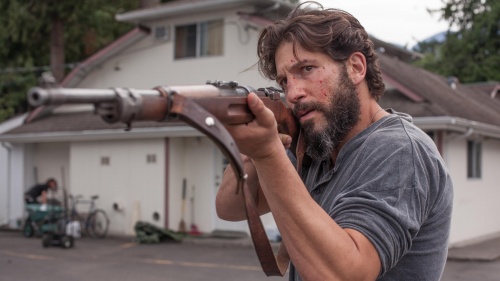 Promotional image of Sam with the Karabiner. Note the rifle sight is different from what he is using in the film.

Near the climax of the film, Sam Rossi (Jon Bernthal) goes for his Karabiner 98k, but for some reason the rifle changes to a VZ-33, the carbine version of the VZ-24 Czech Mauser.

Sam (Jon Bernthal) with the rifle.
Retrieved from "https://www.imfdb.org/index.php?title=Sweet_Virginia&oldid=1278424"
Category: