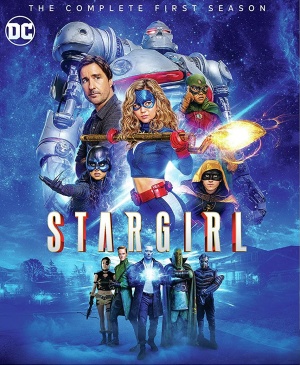 The following weapons were used in Season 1 of the television series Stargirl:

A Beretta 92FS with wood grips is used by a mugger trying to rob Henry King Sr (Christopher James Baker) in a flashback in "Brainwave" (S1E9). 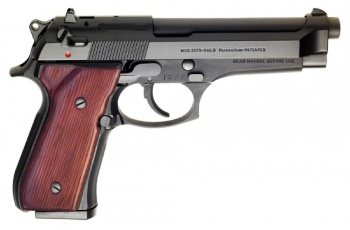 The hooded mugger aims his sidearm at Henry King in "Brainwave".

What seem to be M1911A1s in a stainless finish are seen with Tigress (Joy Osmanski) in her shoulder holsters as a backup weapon. 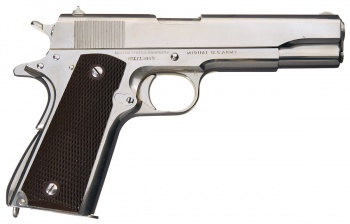 The pistols in the shoulder holster in in "Stars and S.T.R.I.P.E., Part One."

The Remington 1866 Derringer in a gold finish is seen in "Hourman and Dr. Mid-Nite" (S1E5) with Steven Sharpe aka The Gambler (Eric Goins). 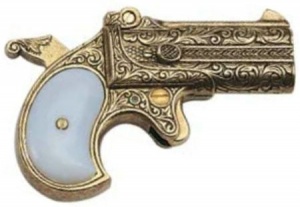 The gold derringer from Sharpe's right sleeve gets retracted in "Hourman and Dr. Mid-Nite".

Sharpe takes out his derringer in "The Justice Society".

A crossbow pistol is one of the weapons used by Tigress in "The Justice Society" (S1E6), used as her primary weapon.

A shot of Tigress confronting Yolanda aka Wildcat in "The Justice Society".

Good shot of the crossbow pistol.

The unused crossbow pistol in Sportsmasters/Tigress' armory in "Stars and S.T.R.I.P.E., Part One."

Tigress takes out the Fiddler after being pissed of her accusations that she's unfit to be Artemis' mom.
Retrieved from "https://www.imfdb.org/index.php?title=Stargirl_-_Season_1&oldid=1442934"
Categories: