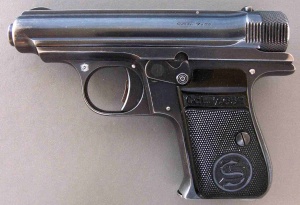 Sauer 1930 is a German compact pistol, an improved version of Sauer Model 1913. It was manufactured in 1930-1937. The production was curtailed in favor of the new model, Sauer 38H. Model 1930 was issued to German police and also found some use in Wehrmacht.

The Sauer 1930 and variants can be seen in the following films, television series, video games, and anime used by the following actors: