This is a page for all of the 'mystery' pump shotguns in films (usually obscure models from foreign makers). As more information is gathered, these guns will be identified.

Also there is a guide to recognizing pump shotguns by noting the specific details which make them unique.

There are many 12 gauge shotguns that are very unique looking and easy to identify. This page is dedicated to the most common pump shotguns that people tend to confuse with each other.

Just like the Big Three Auto makers in the U.S. (GM, Chrysler & Ford), for the last 20 years the Big Three Pump Shotgun makers in the U.S. were Remington, Winchester and Mossberg. The three most common pump shotguns now are the Remington 870, the Mossberg 500/590, and the Winchester Model 1200/1300. (UPDATE: Just as the automaker Chrysler went under and was re-organized under a govt. funded new company "New Chrysler" stopping production on older lines completely and focusing on new models, on the firearms side, Winchester has stopped making the Model 1300 in 2006, instead deciding to focus on its new millennium sporting pump shotguns, the X2, the Super X3, and the Super X Defender).

Prior to the 1960s, the three most common pump shotguns were the Remington 870, the Ithaca Model 37 and the Winchester Model 12. Mossberg aggressively went after Ithaca's market share and got it. There were also far more 'budget' shotgun makers like Savage, Stevens, Hi Standard, Springfield, etc. who sold their own lines and sometimes branded shotguns through major store chains (like the J.C. Higgins/Ted Williams line for Sears Roebuck).

The market is constantly changing. New models and styles have exploded post year 2000, especially the wide variations of tactical set ups. We will see if movies and television start showing the more modern pump shotguns, but for the most part, we will see 'the classics' for a long while.

This recognition guide will grow with additions of other firearms manufacturers.

Mossberg 500AT with wooden stock

The Difference between the back receivers, pin placement, safety location and trigger guard/assemblies 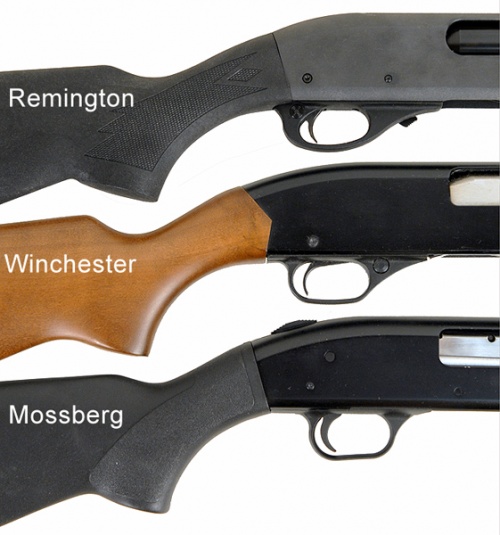 From top to bottom: Remington 870 new model, Winchester Model 1300, Mossberg 500. Note: the Remington 870s have changed their trigger groups, but haven't changed the name. Please note the difference between the 870s of the 1970s-1990s and now. 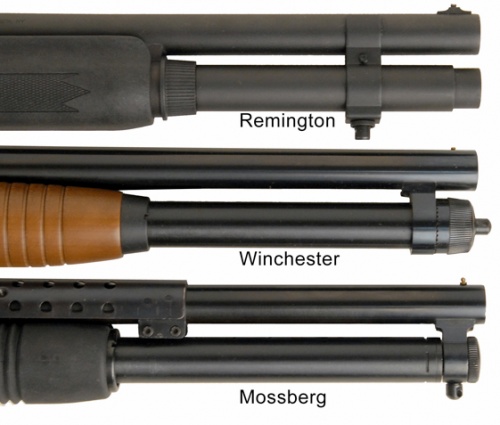 From top to bottom: Remington 870 new model, Winchester Model 1300, Mossberg 500. Note the difference between the tube nut just ahead of the foregrip, and the design of the support post between the tube and barrel. Also the three models have different muzzle nuts at the end of the shotshell tube.

Well, one can always check online as to the internal and structural differences between the two models. But sometimes Model 500s are sold with heat shields, so that makes them harder to distinguish in a movie whether they are 500s or 590s.

Side profile comparison between the Mossberg 500 and the 590

Front ends of the Mossberg 500 and the 590. Please note that the end cap for the magazine tubes are different as are the mounting bars between the barrel and the extended magazine tube. The 590 tube magazine endcap is the most distinctive feature of the 590. Some of them have added swivel attachment points at the end which make them resemble the Winchester 1300 end caps, but the shape is distinctive to the Mossberg 590

Many of the other brands of 12 gauge pump shotguns are mis-identified, due mostly to the fact that they are not as common as the most famous pump shotguns. Here is a guide that will help ID shotguns in films/television/et al. Seen here in this image are the magazine tubes (and the specific tube end caps and barrel mounts) that help positively I.D. these shotguns. It is noteworthy that ALL of these models of shotguns have appeared in a film, show, video game or anime somewhere. 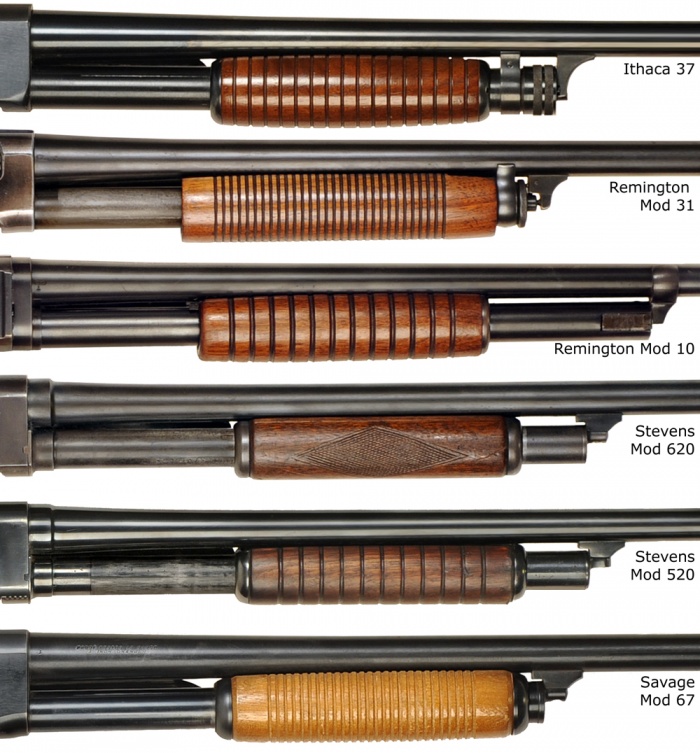 Models which do not yet have a page