Palm Trees in the Snow (Palmeras en la nieve) is a Spanish 2015 romantic drama film directed by Fernando Gonzalez Molina and adapted from the novel by Luz Gabas. The story depicts the life of Kilian (Mario Casas) who lived in 1950s-1960s on the African island of Fernando Po (modern Bioko), at that time a Spanish colony.

The following weapons were used in the film Palm Trees in the Snow (Palmeras en la nieve):

Large frame M1911-style pistols are seen in the hands of Kilian's brother Jacobo De Rabaltue (Alain Hernández), cocoa plantation foreman Gregorio (Luis Callejo), local rebel Atsu (Malcolm Treviño-Sitté), and an officer of the Equatorial Guinea armed forces. Due to the external extractor, slanted slide serrations, and slightly extended barrel these pistols (or pistol, if a single prop is reused) resemble such Llama pistols as the Model 8 or Model IX-A (late versions of both models lack vent ribs that are seen on samples) but the grip has a flat mainspring housing that isn't common for Llama pistols. 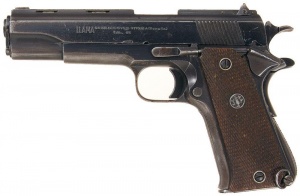 Gregorio draws his pistol during a conflict with some locals over the prostitute Oba.

Another view of the grip of Gregorio's pistol.

He holds the pistol to Oba's head.

An officer manning a roadblock shoots a local man during an argument. His pistol seems to be the same model.

Jacobo's pistol. In the next moment, it switches to another model (see below).

Atsu holds a pistol when he abducts Kilian and plans to bury him alive.

Jacobo fires at Mosi. In comparison with the pistol that Jacobo holds in the previous moment, this one looks more compact, with a differently shaped hammer and trigger guard.

The slide locks back.

During the scene set in 1968 when the Spaniards leave Fernando Po, an officer of the Equatorial Guinea Army is armed with an unknown pistol. It is definitely a model from the 1990s-2000s, not fitting for the time when the story is set.

The officer carries his pistol in a holster.

He fires into the air.

A soldier at the right holds a Star Z-45 at the roadblock at Sampaca on Fernando Po.

Soldiers on the streets of Santa Isabel after the declaration of independence.

A soldier on the approach to the pier.

Soldiers on the pier.

Soldiers block the crowd trying to get to the boats.

Soldiers fire at the crowd.

A good view of a submachine gun.

Some soldiers of the Republic of Equatorial Guinea are armed with AKMs.

Two AKMs are seen at the left.

A soldier with an AKM stops the car.

Soldiers with AKMs at the roadblock.

A soldier at the right is armed with an AK-47.

In the scene set in Malabo (former Santa Isabel) in 2003, police personnel carry Heckler & Koch G3 or CETME Model C battle rifles (the overall appearance of these guns is nearly identical and there isn't any closeups that would help to identify the exact model).

The policeman in the center holds a CETME.

Two police officers on a street stand guard with their rifles in hand.

In the scene set in 1954, guards on Fernando Po are armed with M43 Spanish Mauser rifles, identified by the typical auxiliary bayonet lug.

Guards on the pier in Santa Isabel.

A good view of the Mauser rifle at the right.

Another view of a rifle at the right.

Guards manning a roadblock in Sampaka.
Retrieved from "https://www.imfdb.org/index.php?title=Palm_Trees_in_the_Snow_(Palmeras_en_la_nieve)&oldid=1421042"
Categories: