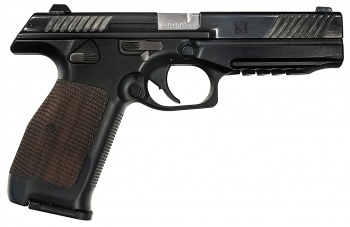 The PL-14 Lebedev is a Russian prototype service handgun designed by Dmitry Lebedev and in development by Kalashnikov Concern. Similar in design to the Arsenal Strike One and the Steyr M9, the PL-14 offers a very low bore axis and a high ergonomic grip. It features fully ambidextrous controls, a polymer frame with a modular grip that has interchangeable backstraps, and is ether striker-fired or contains a concealed hammer. The PL-14 was designed “from scratch” with a great deal of input from top Russian IPSC shooters and Spetsnaz officers.

The PL-14 Lebedev and variants can be seen in the following films, television series, video games, and anime used by the following actors: 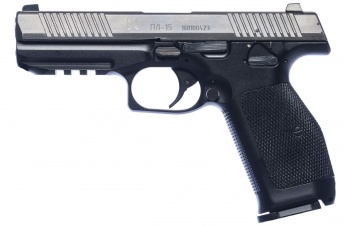 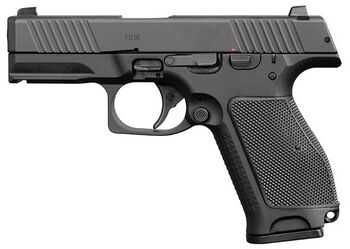 The PL-15 pistol (Lebedev pistol of the 2015 model) is is a improved version of the PL-14, first presented at the International Military-Technical Forum "Army-2016", and a year later Kalashnikov Concern presented an updated PL-15 with a new bolt shape and a slide stop and shortened version - the pistol PL-15K. The safety and the slide stop, as well as the magazine catch button are double-sided.

The main buyers of PL-15 pistols should be special forces, the army and the police. In addition, in 2021, information appeared about the development of a less-lethal version for a non-lethal 10х28mm cartridge, called PLK-T (МР-359) and a sports version SP1 for practical shooting is proposed.

The PL-15 and variants can be seen in the following films, television series, video games, and anime used by the following actors: