P.J. is a 1968 American crime neo-noir that stars George Peppard, Gayle Hunnicutt and Raymond Burr in a villainous role after playing good guy Perry Mason on television for the previous nine years (1957-1966).George Peppard plays New York City Private eye P.J. Detweiler. He is hired by millionaire William Orbinson (Raymond Burr) to protect his mistress, Maureen Preble (Gayle Hunnicutt). As the story progresses it turns out things aren't as simple as they initially seem and P.J. finds himself set up as the fall-guy in a criminal conspiracy.

NOTE:The screenshots have come from various locations on the Internet. I have ordered the DVD and I plan on completing this page with better screencaps in the near future.

The following weapons were used in the film P.J.: 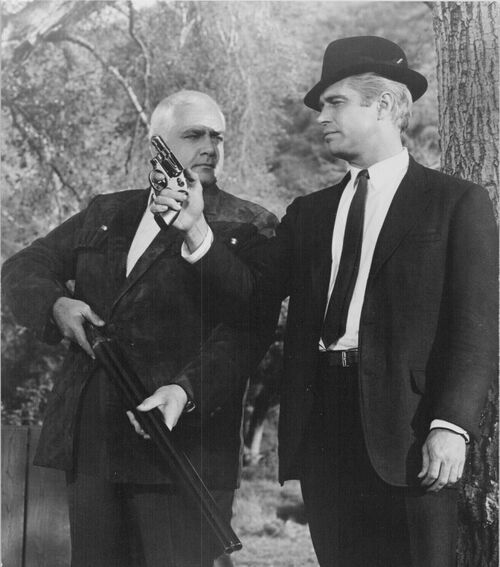 Publicity shot taken during the filming of the movie's climax. Provides a good look at both the Model 10 and the shotgun. 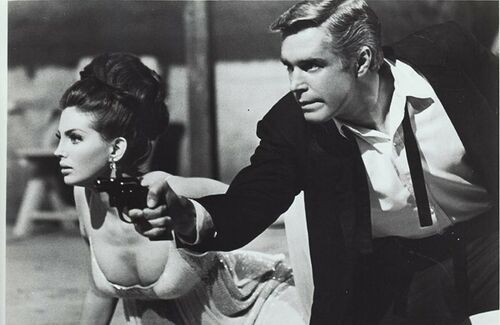 Publicity shot from the movie. Giving a good look at both Detweiler's Model 10 and Gayle Hunnicutt.

Maureen (Gayle Hunnicutt) and Detweiler (George Peppard) use a Walther PPK at various points in the movie. 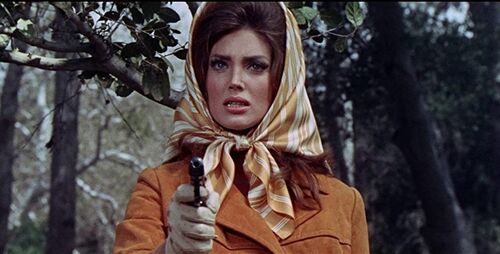 Maureen (Gayle Hunnicutt) makes her play looking very stylish in 1967 fashion and a Walther PPK for an accouterment.

P.J. (George Peppard) uses the Walther during the film's denouncement.

Publicity shot taken during the filming of the movie's climax. Provides a good look at both the Model 10 and the shotgun

Time to get a new mistress. Note how far fake blood has come over the past 55 years.
Retrieved from "https://www.imfdb.org/index.php?title=P.J.&oldid=1521542"
Categories: