New York is a 2009 Bollywood Hindi film that focuses on three students studying at the fictional New York State University whose lives are changed by the events of 9/11. This film is directed by Kabir Khan and produced by Aditya Chopra under Yash Raj Films.

The following weapons were used in the film New York:

An NYPD ESU officer is armed with an Colt M4A1 carbine with a S.I.R.S. rail system. The firearm appears to be an airsoft version, being that the lower receiver is pristine and the receiver pins are not flush but extended, like the pins on the guns of such major Airsoft companies as Classic Army, Tokyo Marui, G&G, etc.

M16A2 Rifle with A1 handguards

In an interesting twist, also seen are M16 (or AR15) rifles which begin as standard A2 variants, with A1 style triangular handguards. The barrels are obviously the heavy A2 barrels and the upper receiver has the adjustable rear sight of the A2 and the brass deflector. This is also an Airsoft weapon, judging by the receiver pins, which are protruding (like most Airsoft M16 variants) versus flush like the real firearm.

Seen in the trunk of a taxi cab owned by Omar (Neil Nitin Mukesh), a young Muslim man originally from Delhi. It is a Hudson Company Replica AK-47. This is a common Japanese All metal replica AK-47 used in films and television shows.

The rifle is seen in the cache.

An ESU sniper uses a rifle that resembles the Remington Model 770 Sport.

FBI agents including Special Agent Roshan (Irrfan Khan) are armed with the Glock 17.

An FBI Agent aims a Glock 17 towards the taxi cab driver.

Omar (Neil Nitin Mukesh) was given a Beretta 92FS by the FBI in order to spy on a former college friend, Sam or Samir Sheikh (John Abraham), whom he hasn't seen in seven years and who the FBI believes is a terrorist.

Omar fires the Beretta 92FS loaded with those 9mm Blanks

What appears to be a Smith & Wesson Model 686 Snubnose is used during a confrontation.

The nickel revolver is seen.

The revolver is drawn.

The revolver used in a standoff.

Malik is aiming his gun towards Yaqub, who is from Bangladesh

The compact pistol is pulled.

A nickel plated CZ 75B pistol is seen in the hands of Zaheer.

An Umarex "Walther P22 S", a blank firing replica of the Walther P22 is seen. 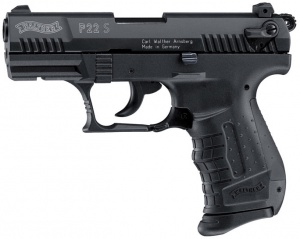 The profile of the slide would indicate either a Walther P99 or P22.

Sam giving the gun to Omar. Visible in this shot is the lengthwise cut in the top of the slide and the port in the top of the barrel ahead of the chamber, which is present on US imported P22 S blank fire pistols as the muzzle is plugged.

The controls on the slide and the hammer make it a P22.

Beneath the replica AK-47 are a series of plastic toy guns of various designs, none of which are identical to a real weapon.

Several pistols that appear to be toy replicas.
Retrieved from "https://www.imfdb.org/index.php?title=New_York_(2009)&oldid=1420682"
Categories: