In season 1 of Ms.Marvel, Kamala Khan, a big fan of Captain Marvel, is a teenage girl from a Pakistani family, who lives an ordinary teenage life with her friends. One day she snatches an ancient ancestral artifact from her house that activates her hidden superpowers, but this cannot be unnoticed by the United States Department of Damage Control. Later, she meets a group of Djinns from another dimension, who call themselves Clandestines. Their target is Kamala's bracelet, which they try to take by force.

The following weapons were used in Season 1 of the television series Ms. Marvel:

Some British soldiers in India carry what appears to be Enfield No. 2 revolvers in holsters in "Time and Again" (S1E05).

The soldier disperses the crowd and Hasan (Fawad Khan).

The soldiers take people away and then leave.

Two Flintlock Pistols, seemingly stylized Charleville Model 1777, are seen on the Camp Lehigh logo, where the AvengerCon takes place in "Generation Why" (S1E01).

Two crossed pistols are on the welcome poster.

The New Jersey police officers, who arrived after the fire alarm went off at Aamir's wedding, have Glock 17 pistols in holsters in "Destined" (S1E03). At the beginning of "No Normal" (S1E06), the JCPD officers and DODC agents arrive at the scene of the explosion of the Circle Q store. Some of them have pistols in their holsters. One of them holds a gun while looking for Kamran in the Islamic Masjid of Jersey City. JCPD officers, including Sergeant Richardson (Jessejames Locorriere), as well as Damage Control agents Sadie Deever (Alysia Reiner), Barrie (Ethan McDowell), and several unnamed agents also use the guns.

In the background, a police officer enters a building in "Destined" (S1E03).

An officer with a pistol passes behind agents Barrie and Deever at the beginning of "No Normal" (S1E06).

The agent has her hand on the grip of her gun as Deever checks the room.

Close-up of his pistol.

The JCPD officers try to hold off Kamala's parents and the crowd of people during the battle.

Agent Barrie with a gun watches as Kamala destroys a car with a sonic gun.

When most of the agents are defeated, Deever herself raises her gun.

Several JCPD officers carry Taser X26s in holsters during the battle at Coles Academic High School in "No Normal" (S1E06). 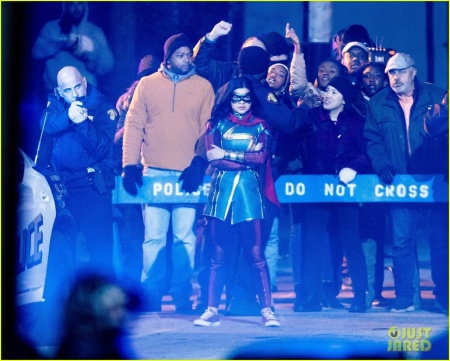 Behind the scenes photo of police officer with holstered tazer.

A faintly visible taser is visible in the holster of one of the officers.

Several Damage Control agents are armed with Heckler & Koch MP5A2s during the battle at Coles Academic High School in "No Normal" (S1E06).

The agent approaches the building with the MP5.

Note the broken gun of one of the agents.

An agent with a submachine gun takes cover behind an open door.

A good shot where you can see the SEF trigger group of the MP5.

Two security guards are armed with Heckler & Koch MP5A4s at the exit of the Jinnah International Airport in "Seeing Red" (S1E04).

The security guard is visible in the background while Muneeba leaves the airport.

Another armed guard to the left of Kamala. You can see a burst-mode stripe on the receiver.

Two officers are armed with AK-47s at the exit of the Karachi station in "Seeing Red" (S1E04).

Officers with rifles on their backs stand in the background.

At least two Damage Control agents are armed with Colt Model 933 carbines with EOTech sights and RIS handguards during the battle at Coles Academic High School in "No Normal" (S1E06).

Two agents are ready to open fire on Deever's orders.

A British soldier with a Lee-Enfield No. 1 Mk III* rifle chases Aisha (Mehwish Hayat) in Bombay at the beginning of "Time and Again" (S1E05).

The soldier runs through the bushes after Aisha. Note the rear sight protector.

Close-up of part of the receiver and magazine.

Aisha turns around abruptly and throws a knife at the soldier...

...and he falls, still holding the rifle.

What appears to be a M16A4 is seen near the disabled DODC agent during the battle at Coles Academic High School in "No Normal" (S1E06).

A clearly visible solid buttstock is visible next to the agent.

The Damage Control agents are armed with M4A1 carbines with EOTech sights during the battle at Coles Academic High School in "No Normal" (S1E06).

The Damage Control agent with a rifle behind the Agent Barrie.

An agent with a rifle stands behind the car on the left.

Two agents with M4A1 take cover behind a car during a skirmish with Kamran.

The agents open fire on the hostile Kamran.

Everyone retreats when Deever gives the order to fire the Stark sonic cannons.

An DODC agent with a carbine aims at Kamala. Note the blank-fire adapter on barrel.

Abandoned rifle after the battle.

The sporting bow is seen on the stand in the Red Daggers' hideout in "Seeing Red" (S1E04).

The bow is seen on the rack when Kamala first time enters the hideout.

Two AvengerCon visitors in Hawkeye costumes hold prop bows in "Generation Why" (S1E01). A fan of Star-Lord brings a replica of his Quad Blaster to the same event.

The Hawkeye fan walks towards the entrance with his friends, with the bow in hand.

And another passes behind Bruno and Kamala.

A Star-Lord fan brandishes a blaster after displaying Kamala's powers.

The Department of Damage Control Agents use a futuristic gun similar to the Stark sonic cannon technology. Several agents who ambushed Ms. Marvel in "Crushed" (S1E02) are armed with rifles. In "Destined" (S1E03), a squad led by Agent Sadie Deever (Alysia Reiner) attacks and arrests the Clandestines. Two agents leading the prisoners to the Damage Control Supermax Prison cells carry guns on their belts in "Seeing Red" (S1E04). During the escape, Najma (Nimra Bucha) draws a weapon and stuns the agent. During the battle at Coles Academic High School in "No Normal" (S1E06), most agents are armed with sonic guns. They arrest Bruno, Nakia, Zoe, and Aamir and chase after Kamala and Kamran.

Damage Control agents run towards Kamala with guns in their hands in "Crushed" (S1E02).

They start shooting when the girl runs away.

The agent hit Aadam (Ali Alsaleh) with a gun during the arrest in "Destined" (S1E03).

A good shot of the barrel is visible on the right while other agents arrest Fariha (Adaku Ononogbo).

In Damage Control Supermax Prison, in "Seeing Red" (S1E04), an agent hits Kamran (Rish Shah) with a taser rod while carrying a gun on his belt.

The agent shoots Kamran during the brawl.

He hides around the corner, outnumbered.

Najma (Nimra Bucha), having taken possession of the weapon, attacks the remaining agent.

The agents draw their weapons from their secure cases, preparing for an assault in "No Normal" (S1E06).

Close-up of a rifle in the hands of an agent.

A squad of agents approach the back door.

The general shape of the weapon from the side is visible during the assault.

The squad stops near a Zuzu device, which they initially mistook for an explosive device.

The assault team finds itself in a cloud of smoke from fire extinguishers.

The agent pursues Zoe with the gun in his hands.

In the final battle at Coles Academic High School in "No Normal" (S1E06), agent Deever orders the use Stark sonic cannon mounted on Humvee (like in The Incredible Hulk) to neutralize Kamala and Kamran.

Close-up of the cannon during unfolding.

The sonic cannon begins to charge before the shot.

It fires at Kamran and Kamala, who hides from bullets behind an energy shield.

The interface of the gun during recharge.

Two Damage Control agents plant plastic explosives on the back door of the Coles Academic High school during the assault in "No Normal" (S1E06).

An explosive with a detonator is installed on the metal door of the school.

After the Spider-Man Investigation, the Damage Control agents confiscate all Stark Industries combat drones and use them for their own purposes. Several of them with Stark sonic cannon follows Kamala into the gateway, leading her into the trap of agents in "Crushed" (S1E02). Another drone tracks down Kamran (Rish Shah) and attacks him in Bruno's apartment at the end of "Time and Again" (S1E05).

The interface of the drone that blocked Ms. Marvel's path.

Another drone blocks the road right at the exit to the street.

The drone flies up to the window of Bruno's room in "Time and Again" (S1E05).

Kamala Khan (Iman Vellani) recorded a video for her YouTube channel in "Generation Why" (S1E01), retelling the events of the Battle of Earth and the feat of Captain Marvel, using stationery and other low-budget props.

Kree and Chitauri soldiers with blasters in the midst of a battle.

Iron Man, along with other Avengers, flies towards the enemy army, firing blasters.

Hawkeye shoots a bow with three pins at once. It's funny, but when the "arrows" fly at the target, they are glued together with duct tape.

In "Generation Why" (S1E01), in front of the entrance to the AvengerCon pavilion in Camp Lehigh, stands a mock-up of a cannon for visitors.