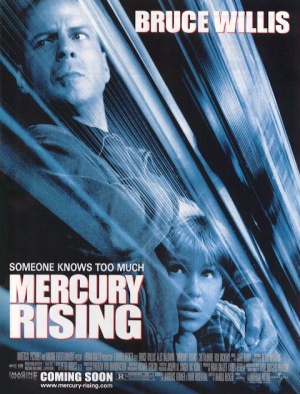 Mercury Rising is a 1998 thriller starring Bruce Willis as Art Jeffries, an FBI agent who must protect a young autistic boy from being eliminated by government operatives after the boy unintentionally cracks an unbreakable cypher. The film was directed by Harold Becker (Sea of Love) and also co-stars Alec Baldwin and Chi McBride.

The following weapons were used in the film Mercury Rising:

FBI Special Agent Art Jeffries (Bruce Willis) carries as his sidearm throughout the film the Subcompact version of the Smith & Wesson Sigma. Near the end of the film, Art (Bruce Willis) tells the FBI SWAT team leader (James MacDonald) "I got a 9mm down on the sidewalk", referring to his Sigma. This weapon is actually chambered in .380 ACP (9x17mm or 9mm Short), which would make this line of dialogue a slight inaccuracy. 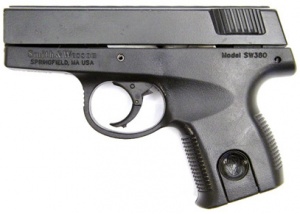 Closeup of Art with his Subcompact.

A very good view of the Smith & Wesson Sigma's grip as Art (Bruce Willis) pulls from a small-of-back position during the final scene on the rooftop.

A SIG-Sauer P226 is the sidearm carried by the majority of the FBI agents seen in the film. Art Jeffries (Bruce Willis) is seen with what appears to be a full-size P226 holstered during a conversation in an FBI office. Special Agent Tommy B. Jordan (Chi McBride) also is seen with the handgun. The SIG also is used by Shayes (Peter Stormare) in the confrontation on the train. A SIG is also pulled by Lt. Colonel Nicholas Kudrow (Alec Baldwin) on the rooftop at the end of the film. The same gun is later used by Art.

Art Jeffries (Bruce Willis) is seen with what appears to be a SIG-Sauer P226 in an IWB holster during a conversation in his superior's office.

Closeup of the SIG pulled by Shayes (Peter Stormare) in the confrontation on the train.

Beautiful shot of the SIG as it lies on the grating.

Special Agent Tommy B. Jordan (Chi McBride) also is seen with the handgun.

A Heckler & Koch P7M8 is used by Peter Burrell (Lindsey Lee Ginter) both with and without a suppressor and is left at the murder scene. When examining the crime scene later, Art asks if the father is so broke, how could he afford the $1500 handgun.

Peter Burrell (Lindsey Lee Ginter) removes the suppressor from the Heckler & Koch P7M8 and fires it using the hand of Simon's father Martin (John Carroll Lynch). When examining the crime scene later, Art asks if the father is so broke, how could he afford a $1500 handgun.

A Heckler & Koch USP with a suppressor is used by Peter Burrell (Lindsey Lee Ginter).

Peter Burrell (Lindsey Lee Ginter) chambers a round in his suppressed Heckler & Koch USP while searching for Simon at the hospital.

Art Jeffries (Bruce Willis) with Beretta 92FS Inox while on an undercover assignment.

M16A1 with A2 style handguards

An M16A1 with A2-style handguards is used by Peter Burrell (Lindsey Lee Ginter) to "hold off" the FBI SWAT team at the skyscraper.

Peter Burrell (Lindsey Lee Ginter) prepares to fire at the FBI SWAT team with the M16A1.

Burrell with the rifle. Note A1 receiver.

Audey (Thomas F. Duffy), one of the militia members, uses a Colt XM177 Commando during the bank standoff.

Audey (Thomas F. Duffy) aims his Colt XM177 Commando at a hostage during the bank standoff.

James (Chad Lindberg) continues to hold the rifle after being shot by the FBI SWAT team.

Edgar Halstrom (Richard Riehle) aims the Ruger AC556 at the hostages one-handed during the bank standoff.

An FBI SWAT agent aims his Heckler & Koch MP5A3 during the rooftop shootout.

James (Hank Harris) holds the Remington 870 during the standoff.

James (Hank Harris) with the Remington 870 on the left.
Retrieved from "https://www.imfdb.org/index.php?title=Mercury_Rising&oldid=1416640"
Categories: