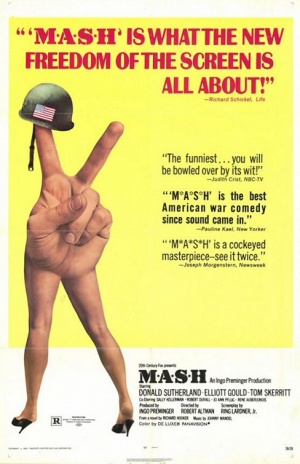 M*A*S*H is a 1970 black comedy directed by Robert Altman and starring Donald Sutherland, Elliott Gould, and Tom Skerritt. It is a loose adaptation of Richard Hooker's 1968 novel MASH: A Novel About Three Army Doctors and would spawn the very popular television series of the same name, which ran for eleven seasons (or, eight years longer than the actual Korean War.) The film garnered five Academy Award nominations, including Best Picture and Best Director, but ended up only winning one for Best Adapted Screenplay. As it is a black comedy satirizing the absurdities of war and military life, the only firearm seen in the film is at the football game.

The following weapons were used in the film M*A*S*H:

A referee, played by football legend Howard Schnellenberger, fires the only firearm seen in the film, an M1911A1, to signal the end of the football game.

The referee fires his pistol, the only gun in the film. Howard Schnellenberger was the receivers coach for the local Los Angeles Rams at the time.
Retrieved from "https://www.imfdb.org/index.php?title=M*A*S*H_(1970)&oldid=849756"
Categories: