Last King of Scotland, The

The Last King of Scotland is a 2006 historical drama that tells the story of Nicholas Garrigan (James McAvoy), a young Scottish doctor who travels to Uganda in the 1970’s to work in a rural hospital. By chance, he meets President Idi Amin (Forest Whitaker) and they become friends. However, Idi Amin’s increasingly erratic behavior turns their friendship into a dangerous relation. The film was based on the novel written by Giles Foden, who mixed fictional and historical events. Whitaker would receive an Academy Award for Best Actor for his role as Amin in the film.

The following weapons were used in the film The Last King of Scotland:

President Idi Amin (Forest Whitaker) carries a stainless Zastava M88 as his main sidearm. Dr. Nicholas Garrigan (James McAvoy) is seen grabbing it and putting a water buffalo out of its misery with it. While this is the appearance of a rather rare pistol on the screen, this is an anachronism, as the M88 was not available until 1988 (something closer would be the TT-33, on which the M88 is based). Furthermore, in real life Amin preferred the Webley Mk VI revolver. 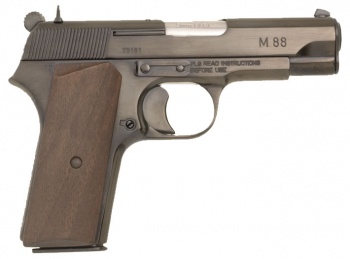 A few seconds later, Nicolas hands back the Zastava M88 to Idi Amin.

Nicholas is seen firing an FN Hi-Power to start the swimming race between President Amin and his men.

Nicholas firing the Hi-Power at the side of the swimming pool.

In a number of scenes, Ugandan soldiers are seen with Sterling submachine guns, most notably in the scene where Nicholas is held at gun point.

Nicholas facing the business end of a Sterling.

One of Amin's bodyguards is seen carrying a full size Uzi.

The bodyguard to the left of Idi Amin carries the Uzi.

One of Amin’s bodyguards is seen carrying a Beretta M12. It is never fully visible at any one time, but enough detail can be seen as the bodyguard moves backwards and forwards slightly during the shot. One of Amin's secret police can also be seen holding one during the aircraft hangar scene.

The bodyguard to the right of Idi Amin carries the Beretta model 12.

The main rifle seen in the hands of the Ugandan army and Presidential guards, and also used by assassins, is the Heckler & Koch G3A4, the rare early version with slimline handguard. This particular (original) version was produced in a short period from 1974-1978, which makes it historically accurate. A Presidential guard firing at attackers of the presidential motorcade.

The fixed-stock Heckler & Koch G3A3 is also used by the Ugandan troops.

One of the attackers of the presidential motorcade wields an AK-47.

In a hangar after the attempted assassination of Idi Amin, one of Amin's soldiers is seen holding a Sa vz. 58 V which can be easily identified by the unique bolt.