The Lady Vanishes is a 1979 British spy comedy, a remake of Alfred Hitchcock's 1938 film. The movie is directed by Anthony Page and stars Cybill Shepherd as American heiress Amanda Kelly, Elliott Gould as photographer Robert Condon, and Angela Lansbury as English governess and music teacher Miss Froy. Unlike the Hitchcock's film that is set in mid-1930s in a fictional Balkan state, the plot of the 1979 version is set in August 1939 in a train from Bavaria to Switzerland.

The following weapons were used in the film The Lady Vanishes:

British diplomat Todhunter (Gerald Harper), one of the passengers of the train, owns a Walther PP pistol. In the climactic scene he refuses to use the gun, but Mrs. Todhunter (Jenny Runacre) takes away the pistol and hands it to Charters (Arthur Lowe) (when Charters fires the Walther PP, the gun is out of the frame and isn't seen). When the pistol runs dry, Robert Condon (Elliott Gould) takes it, planning to use the gun to intimidate the locomotive engineer.

He climbs in the locomotive. 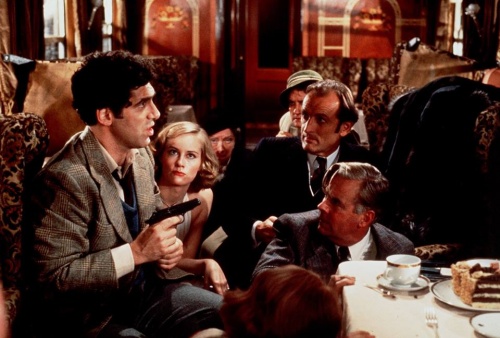 Condon holds the pistol on a promotional image.

The nun takes the pistol from the stunned trainmaster.

Condon fires from the train.

Another view of the P38 in Condon's hands.

The pistol is hold by Caldicott (Ian Carmichael) who then passes it to Charters.

One of Von Reider's subordinates fires his P38 at the train. 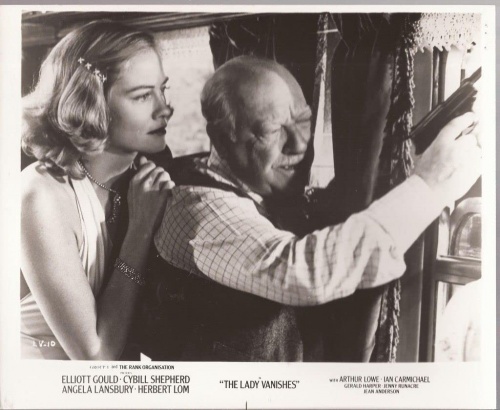 He draws the pistol, threatening the passengers of the train.

When Dr. Egon Hartz (Herbert Lom) exposes himself as a member of the conspiracy, he draws a Beretta M1934 pistol.

Dr. Hartz aims the pistol at Amanda and Robert.

Another view of Hartz's pistol.

A soldier at the background carries a Kar 98k rifle. The German officer (Peter Schratt) in center carries a holster for Luger P08 but it's impossible to say if the pistol is inside.

Soldiers with Kar 98k rifles on the railway station near the Swiss border.
Retrieved from "https://www.imfdb.org/index.php?title=Lady_Vanishes,_The_(1979)&oldid=1395835"
Categories: