Independence Day: Resurgence is the 2016 sequel to the 1996 science fiction film Independence Day. It is set in an alternate 2016, twenty years after the events of the first film, where reverse-engineered alien technology has allowed humanity to reach into space, Resurgence follows a new generation of Earth fighters who once again must band together when an even more powerful alien force arrives to finish off the planet. Roland Emmerich returns as director and the film's cast includes Liam Hemsworth, Sela Ward, and William Fichtner in addition to returning cast members Jeff Goldblum, Bill Pullman, and Vivica A. Fox. Originally intended as the first of two sequels, this film's poor reception and the subsequent merging of 20th Century Fox and The Walt Disney Company make the third film unlikely.

The following weapons were used in the film Independence Day: Resurgence:

Some of the pilots of the Earth Space Defense (ESD) appear to carry the Smith & Wesson M&P as their sidearm, including Jake Morrison (Liam Hemsworth) and Dylan Dubrow-Hiller (Jessie T. Usher).

Seen at the left. 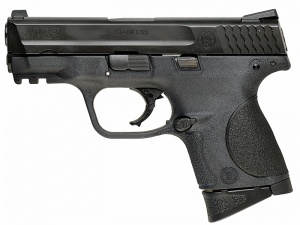 The Glock 17 appears to be used by agents guarding President Lanford (Sela Ward).

Secretary of Defense Tanner (Patrick St. Esprit) and other USSS agents open fire with their pistols.

A Beretta 92FS was seen in the hands of some Earth fighters.

Seen in the center.

Mounted atop a UN humvee is a DShK Heavy Machine Gun.

The DShk is seen mounted on the humvee.
Retrieved from "https://www.imfdb.org/index.php?title=Independence_Day:_Resurgence&oldid=1428317"
Categories: