Hobo with a Shotgun is a 2011 action movie based on the fake trailer featured in some screenings (mainly in Canada) of Quentin Tarantino and Robert Rodriguez' project Grindhouse. The film was the second mock trailer that was made into a feature length film (the first being Robert Rodriguez's Machete).

The following firearms were used in the movie Hobo with a Shotgun:

In the feature version, instead of Ithaca 37, used by Hobo in the original fake trailer, Hobo (David Brunt was replaced by cult actor Rutger Hauer) uses a Remington 870 to execute various criminals including a serial killer covered with blood and cocaine, pimps, bumfights film-makers and, of course, a pedophile in Santa suit. Later, after the Hobo has been captured, his friend Abby takes the shotgun and customizes it, sawing the stock down to a pistol grip and duct-taping an axe to it. 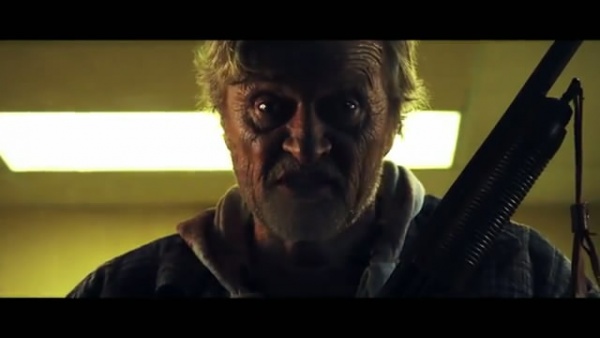 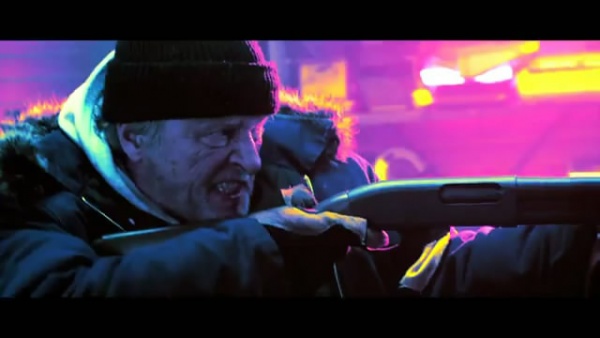 Hobo aims his shotgun on someone in the cool lighting. 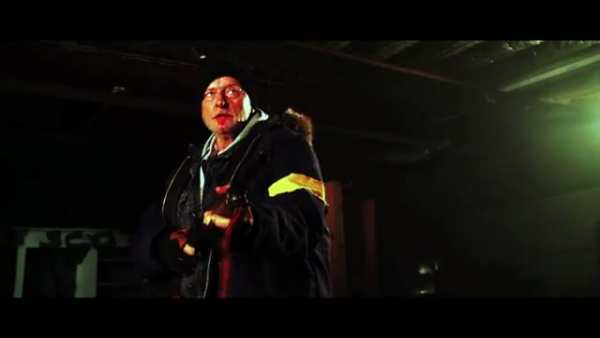 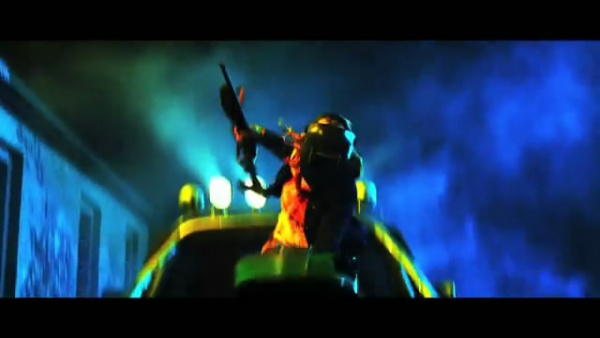 Abby jumping on Grinder with the modified shotgun and a chopped lawnmower.

Ivan (Nick Bateman) is seen threatening a crowd at the beginning of the film with a Taurus PT92AFS carried by Drake. Drake later uses it during the film's climax. 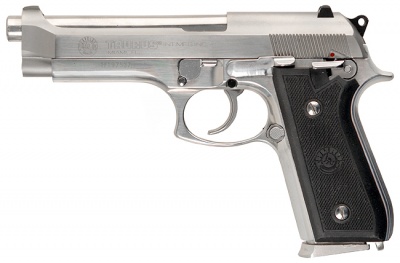 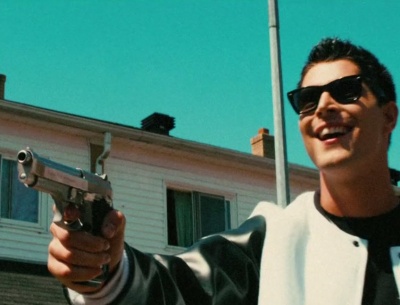 Ivan waves his father's Taurus around to threaten the townspeople. 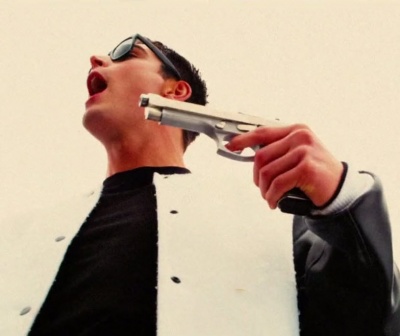 "Go the fuck home, everybody! And don't forget to wash your dicks!"

The Chief of Police (Jeremy Akerman) pulls a Beretta 92FS to welcome Hobo to town. 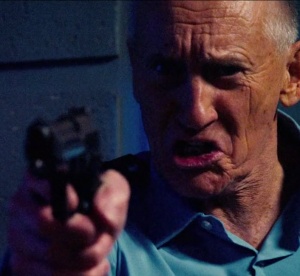 One of the robbers (in the mask of Dr. Doom) can be seen with Smith & Wesson Model 57 in the robbery scene, pointing it at a baby. 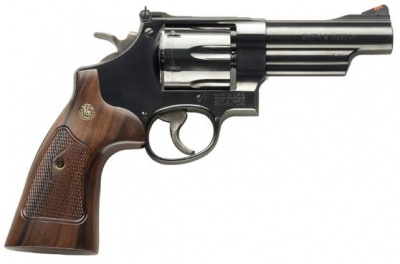 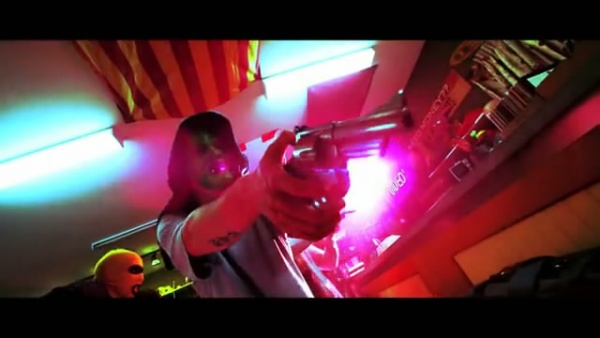 Robber in green shirt and red mask can be seen carrying a revolver, but it's hard to identify it. 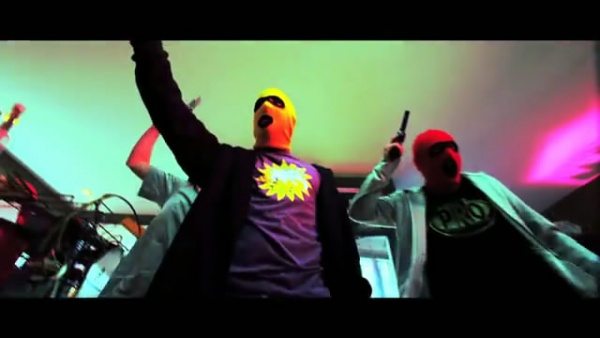 Unidentified revolver is on the right. 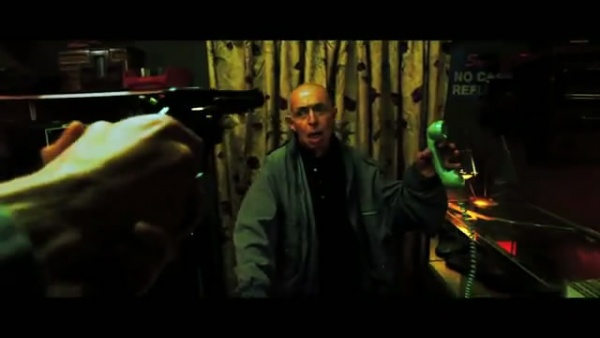 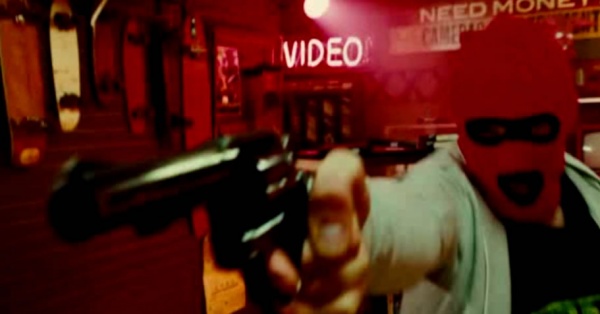 A Better Shot of it.

The Plague are equipped with spear guns that they hang people with by tying a noose around their necks and anchoring the rope to the ceiling with the harpoon. The guns were built upon M203 grenade launchers.

An AK47 or AK type rifle is seen in the hands of a man dealing with a violent pimp. He holds it on the Hobo (Rutger Hauer) momentarily before being distracted by the fact the Hobo has his own shotgun stuck into his mouth. After a brief laugh from all three of them the Hobo delivers justice, one shell at a time. 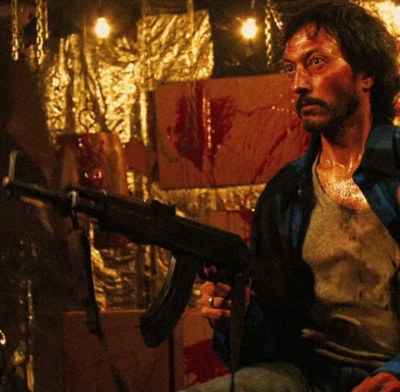 The man holding his AK moments before the Hobo delivers his own style of justice. 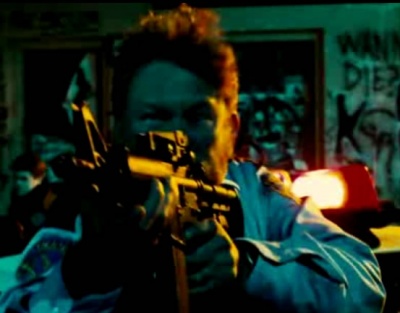 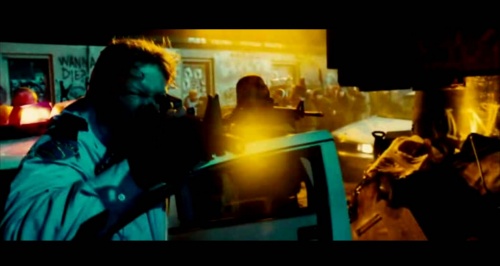 Same weapon and cop from above, this time firing. Another rifle can be seen behind him. 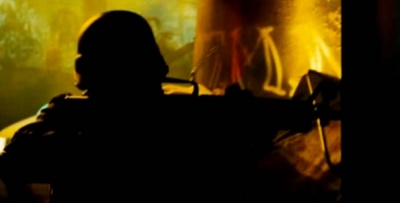 Hard to clearly identify, though the carrying handle is clear.

One of the cops at the end of the film can be seen carrying a MP5A3. It appears to have a flashlight attachment. 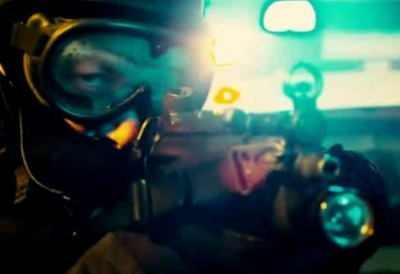 Along with two other unidentifiable rifles, this SKS rifle can be seen on a rack in the pawn shop (top). It is the most clearly seen rifle on the rack. 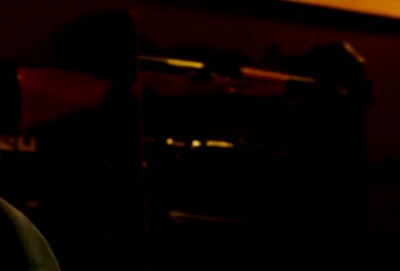 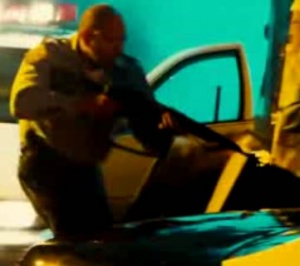 This officer is holding what appears to be an SKS. Regarding the film's moderately low budget, it is not out of the question that is also the pawn shop rifle. The low quality makes it hard to tell though. 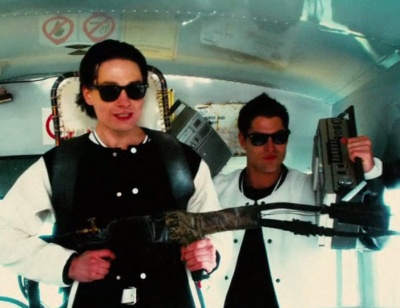 Hobo with a Shotgun did not utilize the same technique as Machete (i.e. recycling originally shot footage for the full length feature) - Director Jason Eisener did not recycle any of the footage from original trailer (which was necessary since the actors were recast). Some of the refilmed sequences are literally shot for shot recreations of the original faux trailer. 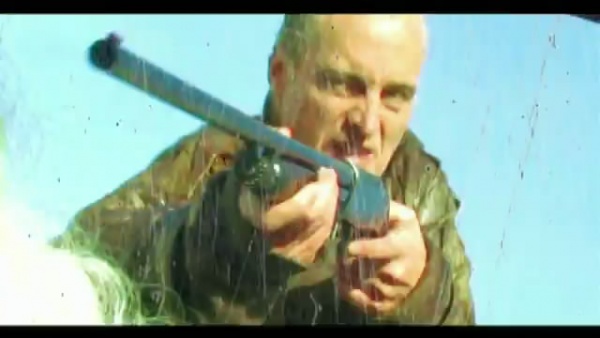 Hobo: "Jerk on this you child-molesting shit-licker!"
A shot of the original Hobo with a shotgun (David Brunt) aiming his Ithaca 37 shotgun on a pedophile in the faux trailer, holding it left handed. 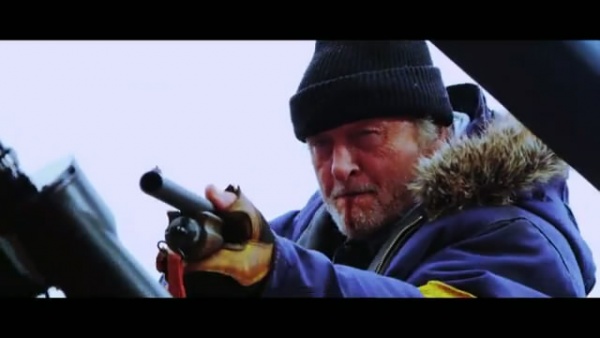 A shot with Rutger Hauer as the new Hobo, aiming his Remington 870 shotgun at the pedophile (except Hauer is right-handed), spouting the same line as above.
Retrieved from "https://www.imfdb.org/index.php?title=Hobo_with_a_Shotgun_(2011)&oldid=1368860"
Categories: