The Four Feathers is a 2002 directed by Shekhar Kapur. It is based on the 1902 novel of the same name by Alfred Edward Woodley Mason and is the seventh film adaptation. 1884: Great Britain wages war in Sudan. Patriotism is rampant at home, but the British officer Harry Feversham does not allow himself to be infected. He has hated military service for years. In the middle of the Sudan war, shortly before a battle, he quits the service. Thereupon he receives four feathers as a token of his cowardice: three from his comrades and one from his fiancée, who turns away from him in disappointment. Disgusted by his cowardice, he disguised himself as an Arab and slips behind enemy lines to free his comrades.

What appears to be a Garate .455 Revolver is used by Jack Durrance (Wes Bentley) after catching up the sniper. 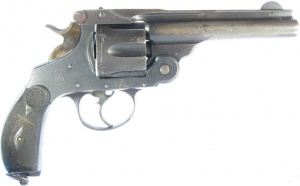 British Army issued Garate revolver - .455 Webley. This is distinguished by its round trigger guard and "skull crusher" grip.

Durrance chases after the Dervish sniper with his Garate revolver at the ready.

Durrance points his Garate at the Dervish sniper. Click here for a better view of this scene.

Edward Castleton (Kris Marshall) and William Trench (Michael Sheen) use an anachronistic Webley .455 Mk V revolver during the battle. The appearance of this Webley model is clearly an anachronism; the Webley Green revolver would be more accurate for this time period.

He fills the cylinder with loose rounds while starring at incoming Mahdist Cavalry.

A stunned Castleton pulls the tigger but it clicks empty..

Note how Castleton's Webley is attached to his belt by a lanyard.

British soldiers through out the film are armed with Martini-Henry Mk. III rifles. Most notably seen used by Jack Durrance (Wes Bentley) when firing it at the charging Mahdist warriors in which the rifle's breech block fails and the gun blows up in his face.

Jack Durrance practices stabbing with the bayonet of his Martini-Henry Mk. III rifle...

British soldiers march armed entirely with Martini-Henry rifles. An interesting note is that the British Army in the Mahdist War worn Khaki uniforms. The director was aware of this but chose the red one because of the better color contrast.

A British soldier fires his Martini-Henry at a fleeing Dervish Sniper.

Capt. Trench (Michael Sheen) with his Martini-Henry at the ready.

Castleton stabs a Mahdist warrior with his Martini-Henry bayonet.

Durrance aims his Martini-Henry at the charging Mahdists.

His Martini-Henry blows up in his face when the breech block fails.

Mahdist warriors in the film mainly use 3-band Snider-Enfield rifles first seen used by the Dervish Sniper (Marouazi Mohammed). Abou Fatma (Djimon Hounsou) gives one of these rifles to Harry Faversham (Heath Ledger), who uses it to shoot down one of the pursuing Mahdist guards.

The Dervish sniper opens the patented Snider action on his Enfield 1853 rifle...

The sniper tries to shoot Durrance with his Snider-Enfield but is shot down.

A Mahdist Cavalryman armed with a Snider-Enfield Cavalry Carbine.

The military version of the Remington Rolling Block is seen used by British-Egyptian auxiliary troops and Mahdist guards. Abou Fatma (Djimon Hounsou) manages to disarm one of the guards of his Rolling Block rifle and kill the other with it.

A Mahdist guard armed with a militarized Remington Rolling Block.

Fatma kills the Mahdist guard with his Remington Rolling Block.

A Gatling Gun with Broadwell drum magazine can be seen in the British camp.