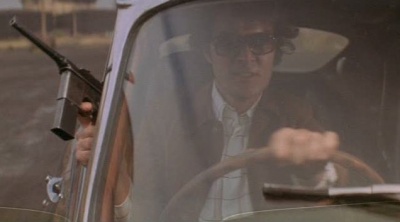 Daniel Pilon (1940-2018) as the contract killer Gorman with a Mauser M712 Schnellfeuer in Brannigan.

Daniel Pilon (11/13/1940 - 06/26/2018) was a French-Canadian actor whose career spanned fifty years. He appeared in numerous U.S. and Canadian movies and television productions. Everything from daytime soaps (Ryan's Hope, Day's of our Lives), primetime soaps (Dallas) and supporting roles in made for television movies and many B movies. He passed away at the age of 77 from Cancer in Montreal.