Curse of the Komodo, The

From Internet Movie Firearms Database - Guns in Movies, TV and Video Games
(Redirected from Curse of the Komodo)
Jump to navigation Jump to search 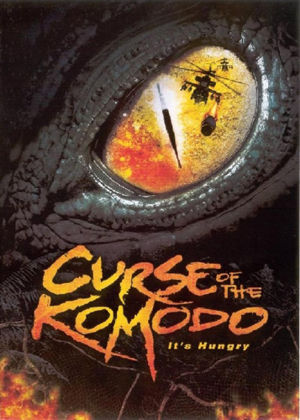 The Curse of the Komodo is a 2004 low budget B-movie about giant Komodo dragons on a desolate island in the Pacific Ocean that is apparently within the flying range of a Bell Jet ranger helicopter, leaving from a major port, but is practically uninhabited, except for a few scientists and of course, a bunch of mutated monsters. It is noteworthy in that it has an unusual selection of weapons to appear in a movie. Like usual, everyone has the magical guns that never need reloading... but this film also has magical bolt-action rifles that fire... semi-automatic (the magic of CGI gun flashes).

The following guns were using in the film The Curse of the Komodo:

Dr. Porter (Gail Harris) carries and fires a Taurus PT92, and apparently she is the only one who is seen actually reloading her weapon during a fight. 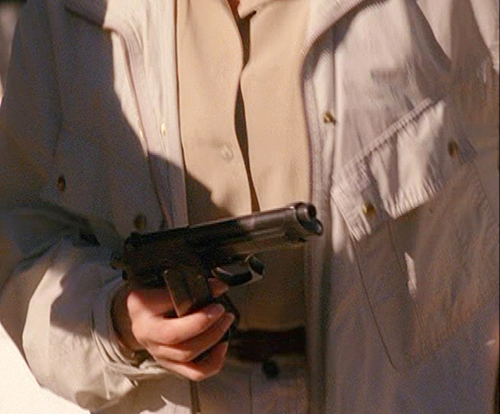 Early on in the film, a covert-ops team are inserted via helicopter to the Komodo Island and promptly eaten. They all carry variations of the AR-15 rifle (most likely civilian clone rifles, being mostly filmed in California with some shots done in Hawaii). We see some A1 variants of the AR15, but we also see some post-ban versions (post Crime Bill politically correct rifles), with fake flash hiders and no bayonet lugs. 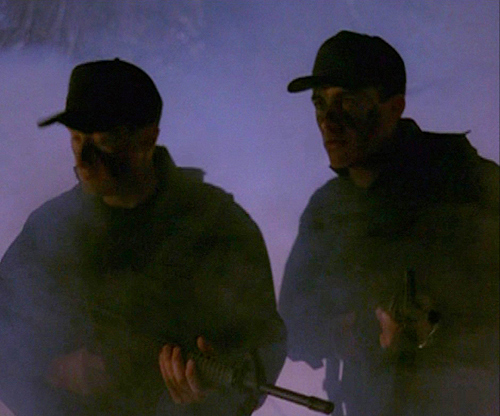 The covert-ops team with a variety of AR-15 rifles with A2 handguards. 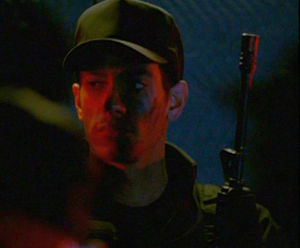 One of the teams in the night raid has an A1 variant of the M16/AR15 as seen by the barrel type. This rifle, though, has A2 handguards. 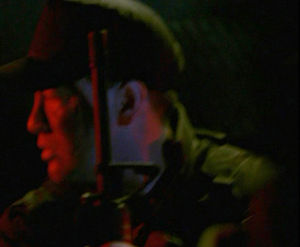 Another one of the teams in the night raid has a post ban version of the A2 heavy barrel AR-15 Rifle. Note the fake flash hider and lack of bayonet lug.

One of the few appearances of this SKS variant in a film, Hanson (Ted Monte) holds an Norinco SKS Sporter Rifle with detachable AK magazine. A "post-ban" version of the Norinco export SKS with detachable AK magazines, the Norinco SKS Sporter rifle was trying to fill the market niche of being "just like an AK" but at less than "half the cost". The barrel is a "paratrooper" length barrel and the gun comes with a thick thumbhole stock, but the rifle was imported for only a few years before it was banned. Not to be confused with an aftermarket conversion or standard SKS rifles that take aftermarket detachable "duckbilled" magazines. 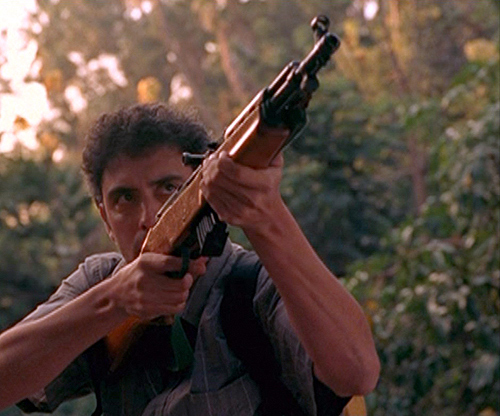 A very odd choice for a modern scientist guarding giant lizards, Reece (Cam Newlin) carries a Finnish Mosin-Nagant M39 with a modern scope mounted. The rate of fire is slow (like any bolt action rifle), but the 7.62X54mmR round certainly has a lot more knock down power than the .223 rounds fired by the others. Too bad the Komodos seem to be bulletproof... 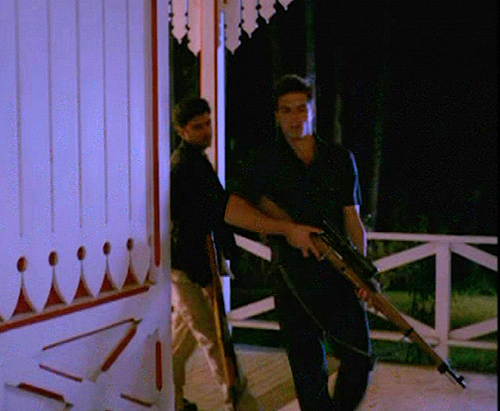 Drake (Paul Logan) carries a Daewoo DR200 which is the post ban version of the Daewoo K1 / K2 Assault Rifle that was imported after 1989 but banned by an executive order by Bill Clinton in 1993. It is the "politically correct" thumbhole stock version that has a diagonal cut in the back of the receiver, a muzzle brake instead of a flash hider, and no bayonet lug. This version has all of the US-made aftermarket accessories to make it "tacti-cool". It has an aftermarket folding stock, a PSG-01 style pistol grip and palm pad, and a scope mount (with scope) attached to the upper receiver. 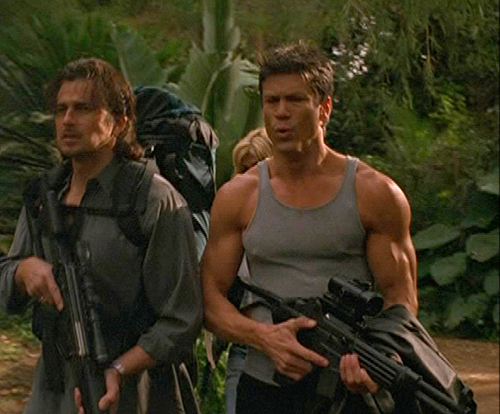 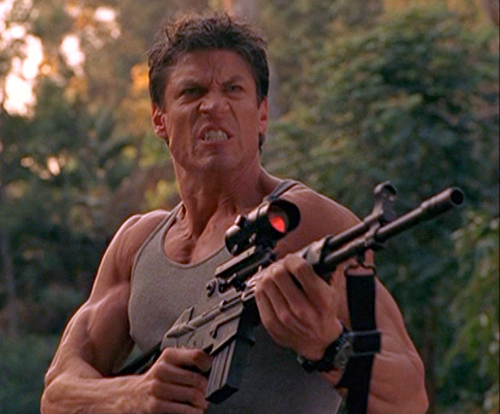 Carried by Jack (Tim Abell), the Norinco MAK-90 is the post import ban version of the Norinco series of AK clones (Type 56, Type 84, AKS-47, etc.) It was imported between 1990 and 1994 (when all imports of Chinese "non-hunting" guns were personally banned by Bill Clinton). This Norinco MAK-90 originally was imported with a thumbhole stock and no bayonet lug. Also, the threads on the end of the barrel were ground off. Jack's version has an ATI™ aftermaket synthetic Dragunov stock and replacement synthetic foregrips. It also has a US-made aftermarket dust cover with integral scope mount (with scope attached). 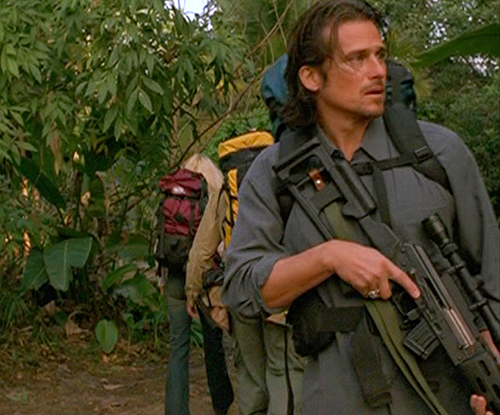 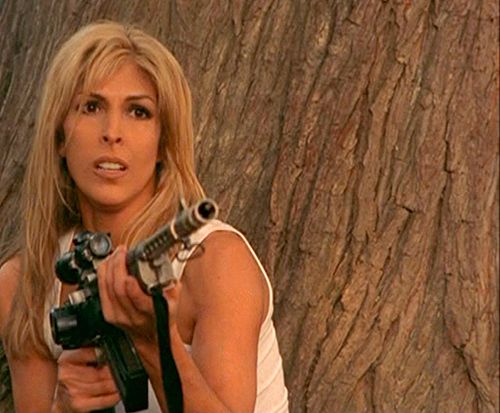 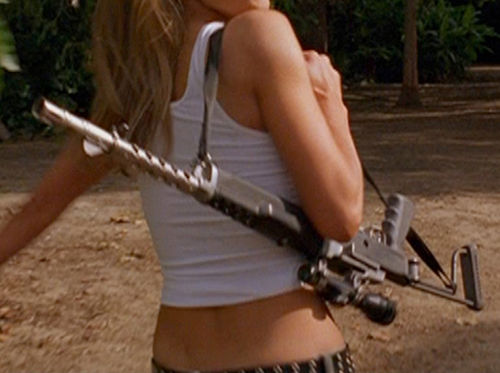 Prof. Nathan Phipps (William Langlois) carries a British Lee-Enfield No.4 Mk.I rifle, tricked out with a heavily modified stock, Harris bipod, scope, and pistol grip. What is hilarious is that the rifle is depicted in the movie as firing semi-automatic(!). Sure, Enfields are quick to operate, but not that quick. Some sources identify the rifle as having a synthetic "Monte Carlo" stock. That is incorrect. It is actually a standard wooden milspec wooden stock that was cut, modified, and spray painted with a green color. 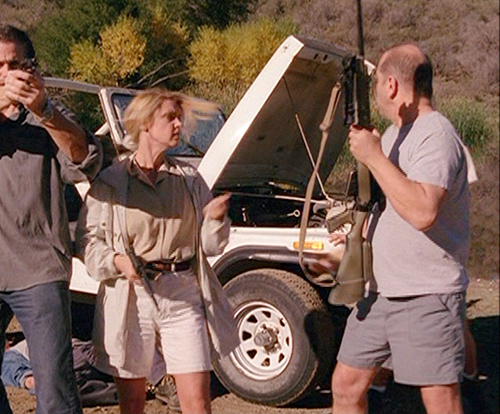 Phipps (William Langlois) with his magical "semi-auto" No.4 Mk.I rifle. 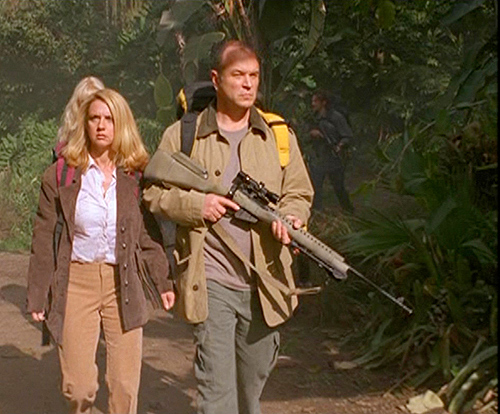