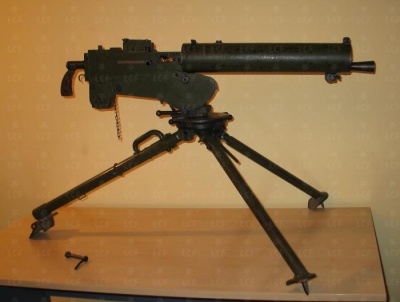 The Ckm wz.30 is an unlicensed Polish clone of the Browning M1917. It was also used in small numbers during the Spanish Civil War.

Introduced in 1930, the wz.30 was designed to replace the myriad number of machine guns in service with the Polish Army in the interwar years following World War I. Following a competition to find a new machine gun, the Polish government originally settled on the M1928 machine gun, a commercial export variant of the Browning M1917 produced by Colt. Poland at first began negotiations to purchase a license for the weapon, but found the high cost of the license, along with a demand from Colt to buy 3,000 machine guns made in its American factories, to be unacceptable. It was soon discovered that the design of the M1917 machine gun was not patented in Poland, and as such, the Polish government decided to produce a locally-made copy at the Fabryka Karabinow plant in Warsaw.

The wz.30 incorporates several improvements on the original Browning design, including a longer barrel, improved sights suitable for anti-aircraft use, and an easier to use barrel change mechanism. The wz.30 became the standard machine gun of the Polish Army and was also used in vehicle mounts. A large number were also exported to Spain, where they saw use in the Spanish Civil War. Poland attempted to make export deals with other countries as well and while the machine gun was shown to perform well in trials (in some cases, even performing better than the original Browning M1917), Polish factories could not reliably guarantee delivery of orders. During World War II, captured weapons were used by Germany and Romania, along with Polish partisans during the Warsaw Uprising.

The Ckm wz.30 and variants can be seen in the following films, television series, video games, and anime used by the following actors: