The following weapons were used in the film The Boondock Saints II: All Saints Day:

The MacManus brothers Connor (Sean Patrick Flanery) and Murphy (Norman Reedus) again use the Beretta 92FS pistols with suppressors that were used in the first film. After "earning his stripes", Romeo (Clifton Collins, Jr.) is also given a Beretta by Murphy to use in the hit at the Silver Peso. In addition to the MacManus brothers and Romeo, the Beretta is also used heavily by many of the Italian mobsters working for Concezio Yakavetta (Judd Nelson) (including almost all of the mobsters guarding him at the Prudential tower).

Connor loads one of the Beretta 92FS pistols after he and Murphy have cleaned them up.

Connor reaches for one of his Berettas when joking around with Romeo.

Connor and Murphy fire their Berettas during the drug lab hit.

Connor about to execute the Chinese gang leader.

Romeo gets his first Beretta.

Italian gangsters firing their Berettas in the Prudential tower.

Another mobster dies firing his Berettas during the final shootout.

Before carrying out the hit on the Prudential tower, the MacManus brothers Connor (Sean Patrick Flanery) and Murphy (Norman Reedus) go to an IRA arms dealer to replace their Beretta 92Fs with custom IMI Desert Eagle Mark XIXs with match weights. They are the .357 Magnum version, according to Charles Taylor, the film's armorer, although the script referred to them as .50-caliber models. Interestingly, this is a reverse of the first movie: In The Boondock Saints, Connor and Murphy traded the Desert Eagles that they confiscated from two Russian mobsters for their suppressed Berettas. In this film, they are trading in their old Berettas for Desert Eagles. 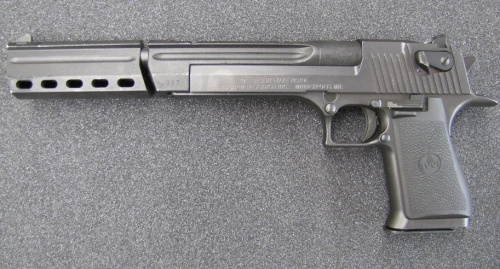 A Desert Eagle Mark XIX (.357 Magnum) as used in The Boondock Saints II: All Saints Day. The weapon pictured here is one of the actual screen-used guns from the film; note the custom barrel weight. (Big thanks to Al Vrkljan at Movie Armaments Group for this IMFDB Exclusive image!)

First glimpse of the Desert Eagle Mark XIXs that will be used by Murphy. Clearly visible in this image is the fluted barrel of the .357 Magnum Mark XIX.

An overhead shot as the Saints prep their weapons in the elevator.

Murphy firing his Eagles at the Prudential.

Connor firing his Eagles at the Prudential.

Murphy holds a Desert Eagle on Crew Cut during the bar confrontation.

The brothers wield their Eagles in the final shootout.

Murphy gets hit while firing his Desert Eagles.

Connor drops his Desert Eagles when surrendering in the finale. These are clearly rubber props, used for the drop scenes.

A pair of custom Para-Ordnance SSP with golden suppressors are used by Romeo (Clifton Collins, Jr.) as his main weapons. The slides of the SSPs are engraved with "El Jefe" ("The Boss") in gold trim. As with the MacManus brothers' Desert Eagles, these weapons were custom-built for the movie by armorer Charles Taylor. 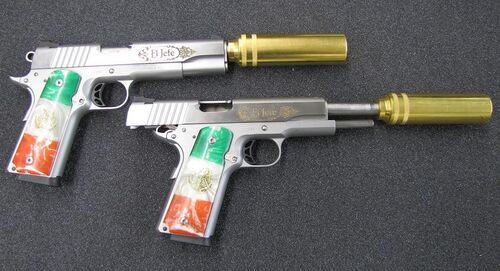 A pair of Para-Ordnance SSPs (.45 ACP) as used in The Boondock Saints II: All Saints Day. The weapons pictured here were the actual screen-used guns handled and fired by Clifton Collins, Jr. in the film; note the custom grips, suppressors, and "El Jefe" engraved into the slides. (Big thanks to Al Vrkljan at Movie Armaments Group for this IMFDB Exclusive image!)

"Do these make me look gay?"

Romeo chambers one of his P-14s in the elevator.

Romeo tries to intimidate the janitor into helping him think up a cool one-liner.

He finally settles on a one-liner: "Ding-dong, muthafuckas! Ding-dong!"

A Para-Ordnance Carry is carried by Special Agent Eunice Bloom (Julie Benz) as her standard weapon. She (provocatively) wears it on a holster over her crotch area.

Eunice flashes her Para LDA 6.45 at the chief.

"What the fuck did you just say to me?"

"Well, how courteous of you to apologize. Courtesy is so important, don't you agree?"

Eunice finishes her demonstration of how the Prudential tower hit went down.

Before the shootout at the warehouse, the MacManus brothers give Romeo (Clifton Collins, Jr.) a nickel Baby Browning with pearl grips to use, much to his disappointment. Although they describe this as a ".22", this is likely a script error. 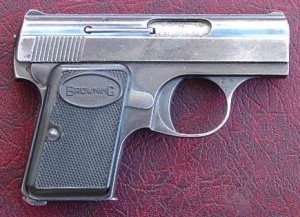 Romeo complains about the small size of the gun. "What am I, your girlfriend?"

Romeo fires the Bauer in the warehouse.

Ottilio "Crew Cut" Panza (Daniel DeSanto) uses a pair of suppressed SIG-Sauer P226R pistols to murder the priest at the beginning of the movie. He later uses a single P226R (this time without the suppressor) when he attacks the Saints at Doc's bar. P226Rs are also used by many other characters throughout the movie - FBI Agent Kuntsler (Paul Johansson) carries one as his issued sidearm, and several of the Italian gangsters use them as well. Also, a pair of two-tone P226s (both older models without Picatinny rails) are used by one of the gunmen who takes part in the final shootout.

In a direct overhead shot, Crew Cut looks over the body of the slain priest, lying on a red carpet. Two suppressed SIG P226R pistols sit atop each other on the floor.

Crew Cut drags the priest out of the confession booth with a SIG P226R (suppressed) to his head.

Crew Cut holds one of his P226Rs on Doc.

Crew Cut pointing his P226R at the brothers.

A mobster prays with his two P226Rs ready in the finale.

Agent "Kunty" holds his P226R on the brothers after the final shootout.

The mobster leaning against the wall has a pair of two-tone SIG P226s.

The thug with the two P226s charges the greenhouse. The guy behind him a pair of nickel Taurus PT92s.

A Para-Ordnance P-10 is seen in the top row of the chest rig worn by Noah Macmanus (Il Duce) (Billy Connolly). 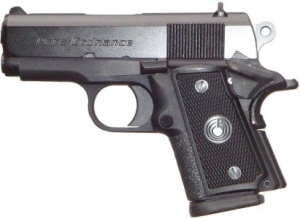 The Para-Ordnance P-10 is on the top left.

What appears to be a Smith & Wesson 5946 pistol is seen on the bottom row of the chest rig worn by Noah Macmanus (Il Duce) (Billy Connolly).

A Glock 17 can also be seen on the bottom row of the chest rig worn by Noah Macmanus (Il Duce) (Billy Connolly).

The Glock 17 is on the bottom left.

A Glock 26 can also be seen in the top row of the chest rig worn by Noah Macmanus (Il Duce) (Billy Connolly).

The Colt M1911A1 can be seen on Noah's (Il Duce's) vest in the flashback scenes of the movie.

A Luger P08 is seen on II Duce's (Billy Connolly) gun vest. He wields it alongside a M1911 pistol.

A Heckler & Koch USP with a two-tone slide is held by a hitman outside of the monastery while Noah MacManus (ll Duce) and Louie 'The Roman' (Peter Fonda) are talking in the garden.

On the right, a hitman holding a Heckler & Koch USP with a two-tone slide.

A Single Action Army revolver with pearl grips is used by Special Agent Eunice Bloom (Julie Benz) in her analysis of one of the crime scenes.

A .38 S&W service revolver. Two of them were used by Noah Macmanus (ll Duce) (Billy Connolly) in his standoff against the hitmen.

During Connor's (Sean Patrick Flanery) vision of their raid of the warehouse, he imagines Romeo (Clifton Collins, Jr.) with a Smith & Wesson Model 629. 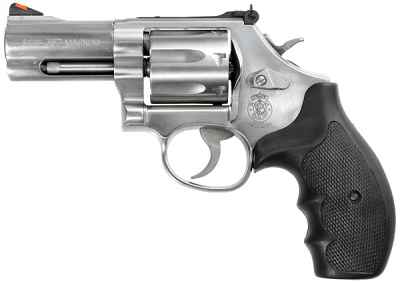 Two S&W 686P revolvers are dropped into the fountain, one with factory grips, the other with Hogue grips - .357 Magnum

A Smith & Wesson M76 submachine gun is seem on the armory wall when the McManus brothers and Romeo go buy weapons.

The H&K MP5K can be seen in the hands of one of the Chinese drug-manufacturers toward the beginning of the movie.

TheSIG SG 552 is seen on the wall of the armorer.

A Mossberg 590 Compact Cruiser is used by Romeo (Clifton Collins, Jr.) during the final shootout.

Romeo raise his Mossberg 590 Compact Cruiser in The Roman's house before the final shootout.

Romeo preps a round to be chambered.

Romeo blasts a mobster with his Mossberg.

Romeo charges through the greenhouse firing his SSPs, with the Mossberg hanging at his side.

While the brothers are tending to their sheep in the beginning of the movie they each carry 12 gauge double-barrel shotguns. When Crew Cut comes into the bar, he is seen using a sawn-off double barrel (it's a very short shot and it's very easy to miss). Connor MacManus Holds a double-barrel shotgun Crew Cut's head.

While the brothers are tending to their sheep in the beginning of the movie they each carry 12 gauge double-barrel shotguns.

Seen to the upper right hand corner in one of the arsenals in the movie hanging on a wall.

A Franchi PA8 is seen on the wall in the Armorer's cage.