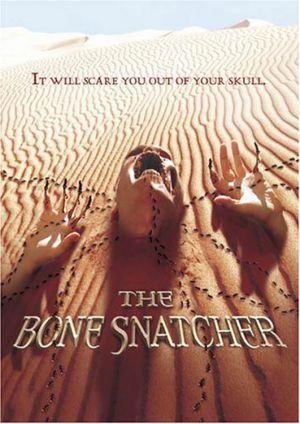 The Bone Snatcher is a 2003 horror film, a UK-Canadian-South African co-production. In the Namib Desert in South Africa something is killing people, leaving behind only their bones. The security team from a local mining corporation is dispatched, along with a Canadian systems analyst, and discovers that some living form consisting of a black mass is taking the bones and using them to provide structure for locomotion.

The following firearms were used in The Bone Snatcher.

The main gun used is a Karabiner 98k Sporter with a large scope on it. It is primarily carried by Kurt (Andre Weideman) but occasionally changes hands.

Kurt holds the rifle as the group examines the corpses of the diamond prospectors.

Kurt hefts the rifle up.

Closeup of the scope as Kurt sights the monster through it.

Karl (Warrick Grier) takes the rifle from Kurt to shoot the monster himself.

The rifle's left side as Karl prepares to fire.

A Smith & Wesson 916 is used by Karl (Warrick Grier) in several scenes.

Karl takes aim during the creature's attack against the camp.

A South African Heckler & Koch G3 is seen carried by Titus (Patrick Shai). After he is severely injured by the creature, Mikki (Rachel Shelley) carries but never uses the rifle. Karl (Warrick Grier) wields the gun during the film's climax at the mine.

Titus with the South African G3 as the group walks through the desert.

Johan (Patrick Lyster) carries a Beretta 92FS as his sidearm in one scene.

Johan with his Beretta.

Side view of Johan's Beretta.
Retrieved from "https://www.imfdb.org/index.php?title=Bone_Snatcher,_The&oldid=441526"
Categories: