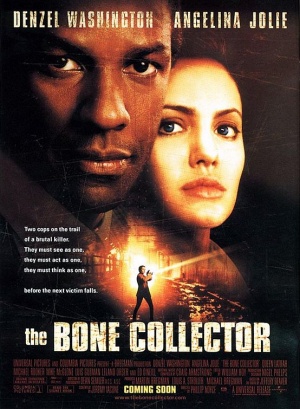 The Bone Collector is a 1999 thriller directed by Phillip Noyce and starring Denzel Washington as Lincoln Rhymes, a renowned NYPD Crime Scene Investigator who becomes a quadriplegic after a devastating accident and now teams up with a rookie cop (Angelina Jolie) to decipher the clues left by a diabolical serial killer. The film was adapted from the Jeffrey Deaver novel of the same name, which also became the basis for an NBC television series that premiered in January of 2020.

The following weapons were used in the film The Bone Collector:

The primary sidearm carried by NYPD Officer Amelia Donaghy (Angelina Jolie) is the Glock 17. She is seen drawing it when she encounters one of the Bone Collector's victims covered in rats.

Amelia's off-duty sidearm appears to be a Smith & Wesson Model 36 revolver. She is seen pulling it when she suspects an intrusion just outside her apartment window. She also pulls it in the abandoned subway car warehouse.

Amelia with her S&W at the ready.

Closeup of the Smith & Wesson Model 36. Note that the cylinder appears to be half-empty.

Detective Paulie Sellitto (Ed O'Neill) pulls what appears to be a Colt Python snubnose during the raid on the garage of the possible suspect.

The Heckler & Koch MP5A3 is seen used by NYPD Emergency Services Unit officers thoughout the film, and as with most SWAT-issue MP5s, they are all fitted with Surefire dedicated forend weaponlights.

On the right, an NYPD ESU officer wields a Heckler & Koch MP5A3.

To the left is an ESU officer with a MP5A3.

On the left, an ESU officer wields what appears to be a Mossberg.
Retrieved from "https://www.imfdb.org/index.php?title=Bone_Collector,_The&oldid=1327745"
Categories: