The following weapons were used in the film The Bad Batch:

A pair of Smith & Wesson Model 15 revolvers are one-armed Arlen's (Suki Waterhouse) weapons of choice. These revolvers have different grips. However, she always uses only one revolver at time. Considering the fact, that she can't quickly reloads her sidearm due the obvious reasons, carrying a single revolver is a rather strange choice.

The Smith & Wesson is seen on the table.

Arlen loads the Smith & Wesson. As her right arm was amputated, she controls the gun's position by her knees.

Arlen fires her revolver at the crow cowboy-style.

The Smith & Wesson is seen tucked into Arlen's belt as she travels through the desert. Note that the grip of this revolver differs from the previous one.

Arlen puts one of her revolvers onto the table.

Arlen tucks one of her Smith & Wessons into her belt.

The revolver is seen pulled by Arlen.

Arlen with the Smith & Wesson on her belt during the hostage exchange. According to the movie poster, she was supposed to hold a SAA (see below) during this moment, but it seems that this scene was re-shot with a single revolver for whatever reason.

Arlen holds a Single Action Army akimbo with her Smith & Wesson on the movie poster, but it does not appear in the movie itself. This is possibly from a deleted scene. 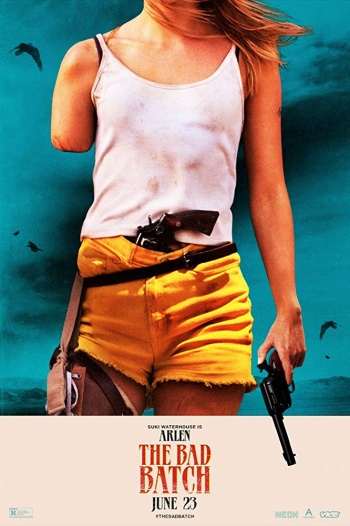 The Lone Man aims the revolver after firing it.

The revolver can be seen.

Lone Man tucks his revolver into his belt.

Two Border Officers (one of the is played by Doug Smith) are seen with a holstered Glock 17 pistols.

The Border Officer at the left with the holstered pistol.

A slightly different view of his sidearm.

Numerous unknown pistols can be seen at the gun shop.

The pistol are seen under the cartoonish M16 rifle.

Six pistols are seen among the AK rifle.

Dream girl with an Uzi on a sling.

Dream girls with the Uzis.

A better view of their Uzis.

Dream girls hold their Uzis. Arlen aims the Smith & Wesson in the background.

Most of the gate guards can be seen armed with Uzis.

A Remington 870 can be briefly seen.

The shotgun is pointed out by the red arrow.

One of the gate guards briefly holds an unknown pistol-gripped shotgun.

The guard with the shotgun is pointed by the red arrow.

A cartoon M16-style rifle can be seen on a sign for a gun shop.

The original M16 (Colt 602), the first version, firing in a 20-round magazine, adopted in large numbers by the US Air Force in Vietnam. This has the original 3-prong flash hider. It would later be replaced by the upgraded M16A1 - 5.56x45mm

The M16 rifle is seen above the pistol.

An AK-style rifle can be seen at the gun shop.

Type I AK-47, early stamped receiver with prototype slab sided magazine - 7.62x39mm. While it was intended for the AK to use all stamped parts for cost reasons, the Soviet metalworking industry was simply not ready to do this at the time, and the high rejection rate of the early stamped AK receivers led to a switch to milling that lasted until the introduction of the AKM.

Six pistols are seen among the AK rifle.
Retrieved from "https://www.imfdb.org/index.php?title=Bad_Batch,_The&oldid=1349600"
Categories: