The Andromeda Strain is a 2008 science fiction miniseries adaptation of the Michael Crichton novel of the same name, which had previously been adapted as a 1971 feature film. The miniseries follows a group of scientists who are determined to find a way to stop a deadly alien microorganism from destroying humanity. The miniseries originally premiered on the A&E channel and was produced by the company founded by directors Ridley Scott and Tony Scott.

The following weapons appear in the television miniseries The Andromeda Strain:

In many scenes, the Browning M2HB Heavy Machine Gun can be seen mounted on U.S. Army M1126 Strykers. The M2HB is used by a group of soldiers in a futile attempt to defend themselves from a swarm of Andromeda-infected crows. The weapon is also incorrectly shown being manually-fired, despite the real Stryker having the M2HB on a remotely-operated mounting operated by a crewman inside the vehicle.

Trivia: The "Stryker" used in the movie is actually an Omni International V-150-S, standing in for the Stryker. This APC was also used in The Incredible Hulk (2008) and Alien vs. Predator: Requiem. 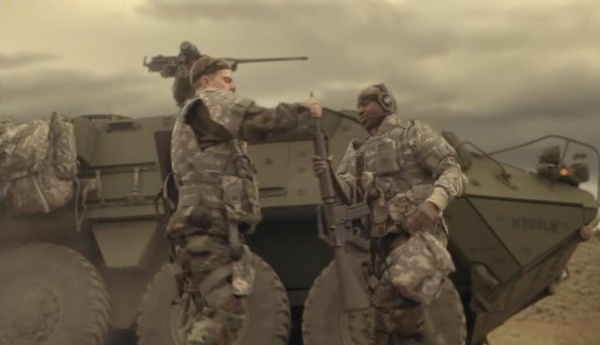 Two soldiers stand in front of a mock Stryker APC with an M2HB turret. 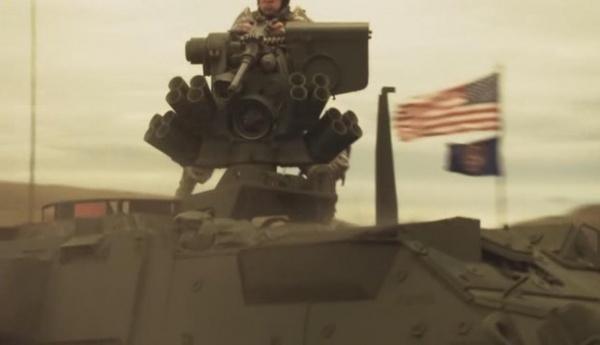 The gunner in a Stryker turret fires the M2HB at the crazy soldier who invades the base (in reality, the M2 turret is remote-controlled on Strykers). 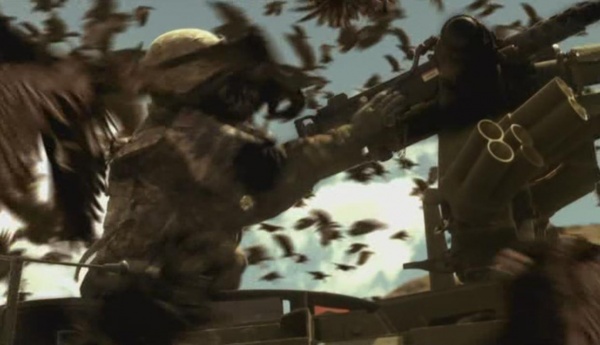 Another Stryker gunner is overwhelmed by infected birds at a checkpoint.

Most of the U.S. Army soldiers carry M16A2 rifles. However, since these weapons are always replaced by other M16 variants (mostly, early M16s and Colt Model 715s) in all firing scenes, it seems likely that all M16A2s used in the miniseries are Tokyo Marui airsoft replicas. 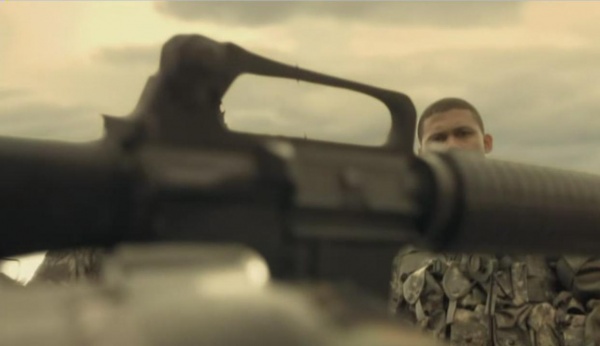 An infected soldier collapses as his comrades look on; the receiver of his (airsoft) M16A2, slung on his back, is visible in the foreground. 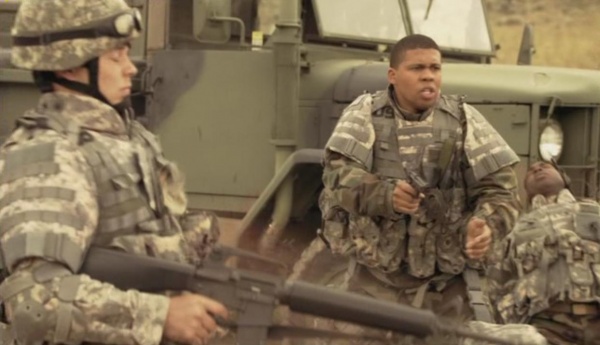 A soldier is hit by his comrade after going insane from Andromeda. 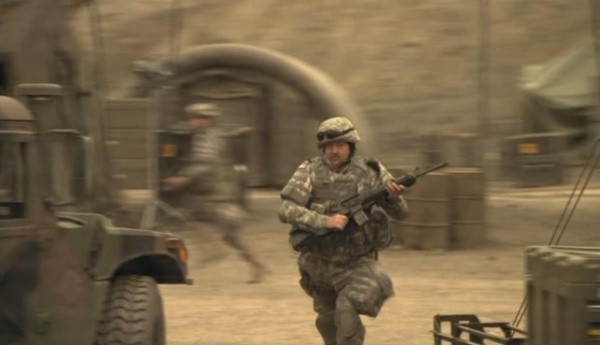 Another soldier with an airsoft M16A2. 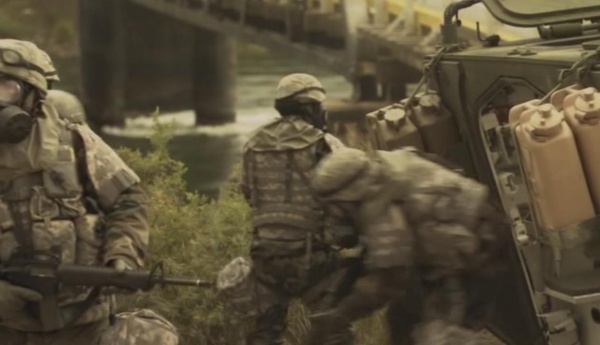 Soldiers with airsoft M16A2s dismount from a Stryker.

Several National Guard personnel, including the soldier who goes crazy and kills off his entire squad, use what appear to be Colt Model 715s, standing in for the M16A2. These are most likely to be Olympic Arms K4B copies, since Felcan Enterprises (the armory in British Columbia which supplied this show) uses mostly Olympic Arms AR-15s, even for shows depicting U.S. Army personnel. 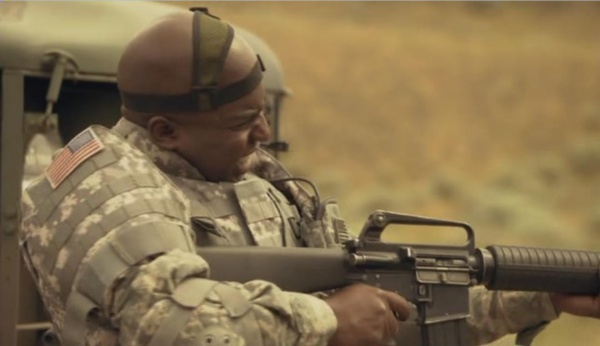 "Hell in a hand basket...that's where we're going!" An infected National Guardsman goes insane and mows down his comrades with his Olympic Arms K4B (standing in for an M16A2). 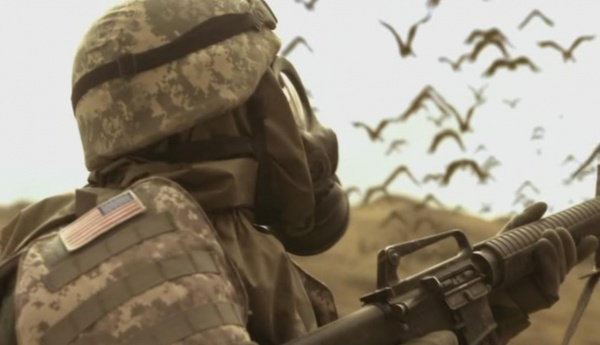 A soldier with another K4B rifle fires at the infected birds. 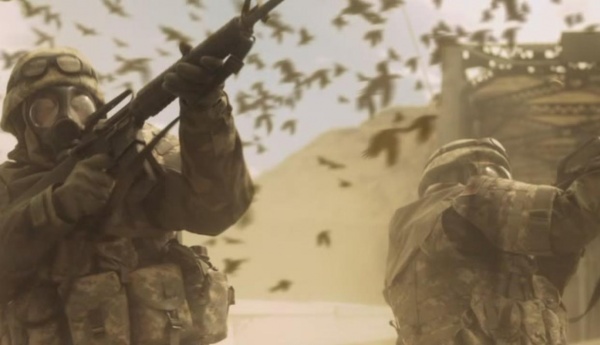 More soldiers with K4Bs fire in vain at the birds. 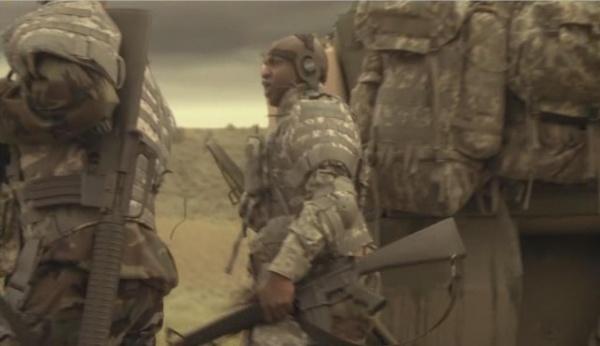 The Guardsman on the left in the foreground has an early M16 with A2-style hand guards.

At one point in the film, a black-ops team can be seen attempting to kill a reporter named Jack Nash (Eric McCormack), using M4A1 carbines as their main weapons, fitted with M68 Aimpoint red dot scopes and Surefire Universal weaponlights.

The M4 used by the soldier who is killed by Andromeda has an older-style flattop receiver with a Weaver (not Picatinny) rail, which means that the carbine is actually an older-model Olympic Arms K3B-FT. 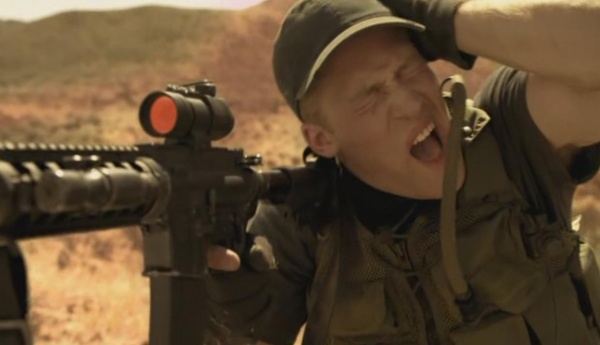 A black ops soldier is hit by Andromeda. 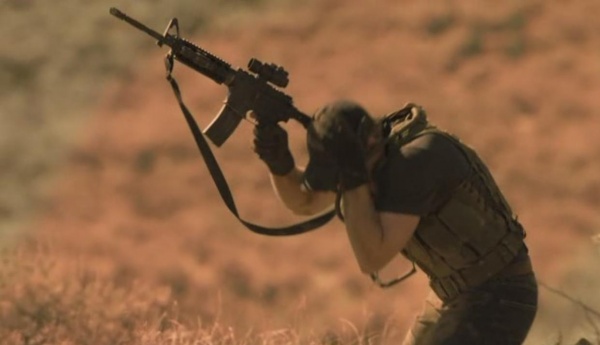 The black ops soldier unloads his M4 into the air as he dies.

The Beretta 92FS is used throughout the film, in the hands of U.S. military personnel (standing in for the M9) and police officers. 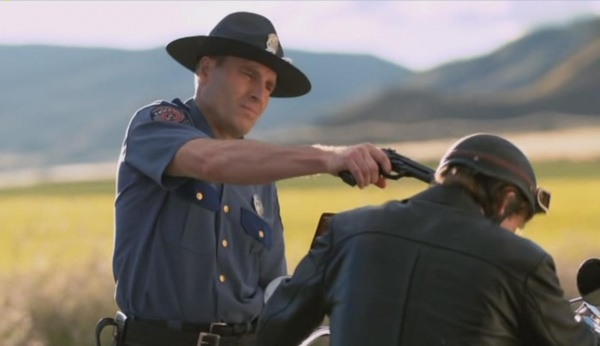 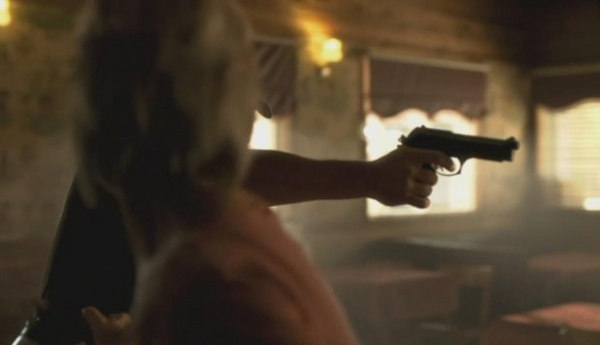 Another police officer (obscured by the woman in the foreground) goes insane and kills patrons at a diner with his Beretta 92FS. 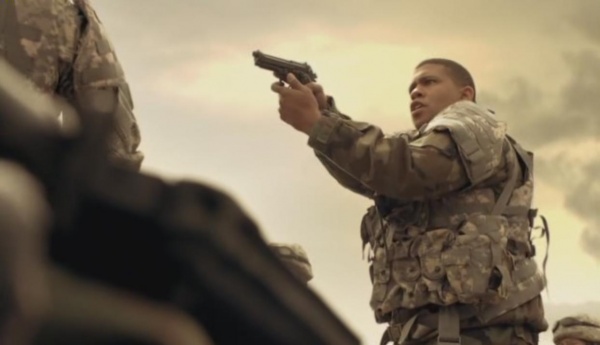 A National Guardsman fires at his infected comrade with an issued Beretta.

Near the end of the second episode, a U.S. Army honor guard can be seen firing a 3-volley salute using M1 Garand rifles at a funeral. 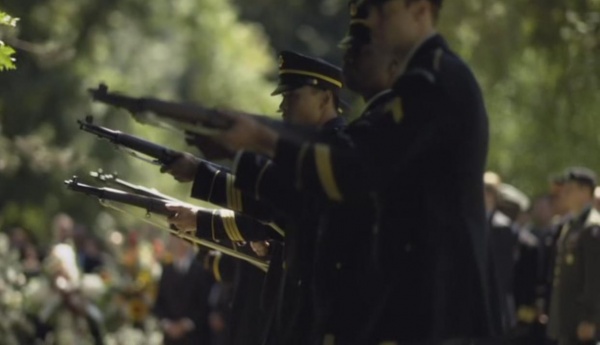 The honor guard fire their M1 Garand rifles into the air at the funeral.

At the end of the second episode, a U.S. Army soldier uses a suppressed Walther P99 to assassinate Col. James C. Ferrus (Justin Louis) and General George Mancheck (Andre Braugher). The suppressor is then removed and the pistol placed in the hand of one of the slain officers in an attempt to make it look like a murder/suicide. 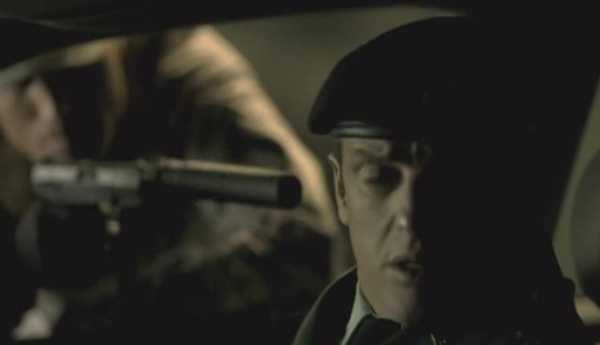 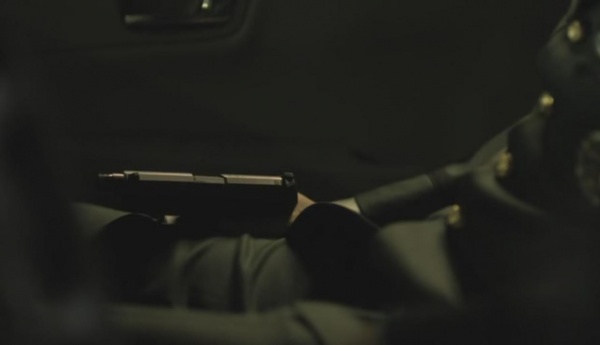 The soldier plants the P99 in Ferrus' hand (minus the suppressor).
Retrieved from "https://www.imfdb.org/index.php?title=Andromeda_Strain,_The_(2008_Miniseries)&oldid=993697"
Categories: