And God Created Woman (Original title: Et Dieu... créa la femme) is a 1956 French drama film directed by Roger Vadim and starring Brigitte Bardot, Jean-Louis Trintignant and Curd Jürgens. An English language remake of the film directed by Vadim was released in 1988 with Rebecca De Mornay in the lead role.

The following weapons were used in the film And God Created Woman (1956):

Main characters use a FN Model 1922 pistol with wood grips. 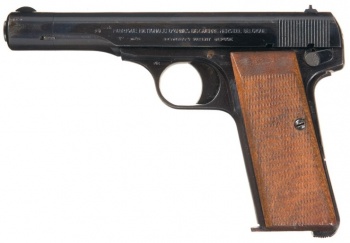 Juliette Hardy (Brigitte Bardot) fired on Eric by his own gun.

Juliette holds in his hand a FN Model 1922 with wooden grips.

... and getting ready to shoot at Juliette.

The 12 Gauge Double Barreled Shotgun hanging on the wall in the house.