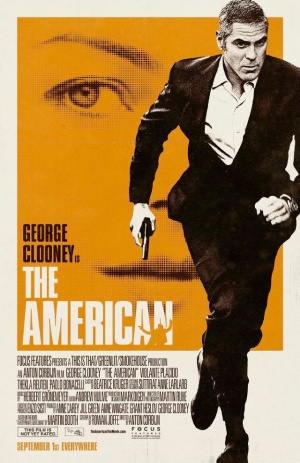 The American is a 2010 thriller directed by Anton Corbijn and starring George Clooney as Jack, a weary and aging American assassin who goes to Italy for an assignment. While there he becomes entangled with a woman, and begins to wonder about his contract, his lover and his controller. The film is based on Martin Booth's novel A Very Private Gentleman, published in 1990.

The following weapons were used in the film The American:

Jack (George Clooney) uses a 7.65 mm Walther PPK as his personal sidearm, both suppressed and unsuppressed, throughout the whole film.

Jack's PPK lying next to his bed.

Jack's Walther PPK in the machine tool area where he displays his skill with machining parts.

Jack affixes a suppressor onto his gun.

Jack aims his PPK at a Swedish assassin.

Jack pulls out his PPK when on a picnic with Clara (Violante Placido). In this shot the gun's markings are seen quite clearly.

Mathilde (Thekla Reuten) pulls a SIG-Sauer P230 from her purse, when she meets with Jack (George Clooney). She never gets a chance to use it. 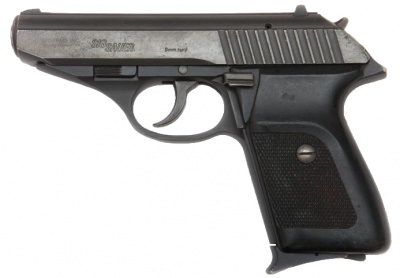 Mathilde releases the magazine of the gun.

An assassin with a Beretta.

A young Swedish assassin (Samuli Vauramo) with a Beretta in Rome.

The young assassin's Beretta gets stuck in his car.

Jack finds a Beretta Jetfire from Clara's purse, which she keeps for self-defense. 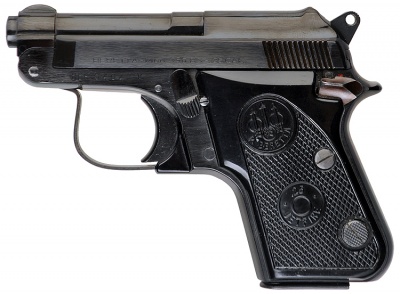 A Single Action Army revolver being fired on tv.

Jack (George Clooney) spends much of the film customizing and sighting a Ruger Mini-14 with a hand-made suppressor he manufactures from various car parts. He also makes a custom case for it. He refers to the gun as a Ruger M14, which is a slight goof since the M14 is a completely different gun. Mathilde (Thekla Reuten), the customer, also asks the gun's muzzle velocity, to which Jack states "about 360 miles an hour". This is a goof since muzzle velocities are measured in feet, or meters, per second. It wouldn't be that bad if his statement didn't translate into 528 feet per second; not even near the muzzle velocity of a real .223 round.

Jack (George Clooney) assembles the Mini-14, after he had ordered a custom barrel to fit in the gun.

Jack with the newly-assembled Mini-14. 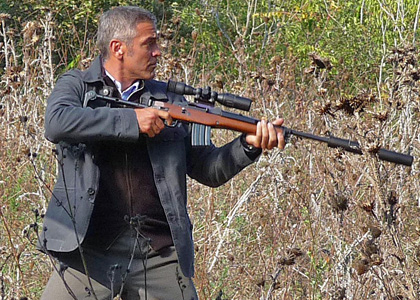 Jack with his Ruger Mini-14 in a production still.

Jack (George Clooney) sights in the rifle he is preparing for the client, the rifle is a standard Ruger Mini-14 (pre 2005 style) with a Ruger Factory Folding Stock - 5.56x45mm

Mathilde adjusts the scope, after test-firing. Her shots were a bit off to the left and for some reason turning the elevation knob instead of the windage remedies this.

Jack fires the gun next to Mathilde, at her request, as she wants to test the suppressor.

Mathilde prepares to use the Mini-14.

The custom padded case Jack makes for the Mini-14.

A Swedish assassin uses an unknown rifle in the beginning of the film in Dalarna, Sweden. He uses it to fire at Jack and Ingrid, his lover. The rifle is never fully seen, but it has a custom winter camouflage on it. We can see a glimpse of it when the assassin goes down as Jack shoots him with his Walther PPK. Perhaps this is a Remington 700? 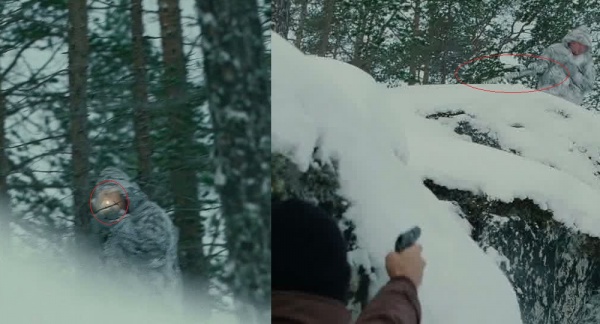 The assassin with an unknown rifle circled in red.
Retrieved from "https://www.imfdb.org/index.php?title=American,_The&oldid=1072357"
Categories: