The Alamo is a 1960 historical war film produced, directed, and starring John Wayne as Davy Crockett. The film also stars Richard Widmark as Colonel Jim Bowie and Laurence Harvey as Lieutenant Colonel William Travis. The film is a dramatization of the Battle of the Alamo in 1836, depicting the valiant attempt by Texan volunteers to defend an old Spanish mission known as the Alamo from a much larger Mexican army during the Texas Revolution.

The following weapons were used in the film The Alamo:

The Kentucky Flintlock Rifle is prominently seen in the hands of the defenders of The Alamo, and is one of the only identifiable flintlock rifles used in the film.

The Boy pours powder in the flashpan of his Kentucky rifle to fire off a signaling shot to the Tennessee soldiers as the Parson (Hank Worden) reads Scripture.

Colonel Davy Crockett (John Wayne) with his .36 caliber Kentucky Rifle wrapped in deerskin. Crockett's "Kentucky" rifle in this scene may be a Hawken rifle due to the shape of the stock and grip.

Crockett and his men fire their rifles on the attacking Mexican soldiers.

Charleville Muskets are used by multiple defenders of the Alamo. Like the Kentucky Rifles, this is one of the few long guns in the film that can be positively identified.

Officers in the film keep dress officer's Flintlock Pistols in cross draw holsters throughout the film. Jim Bowie (Richard Widmark) holds a smaller model on Colonel Davy Crockett (John Wayne) before he takes it from him. Bowie is also seen wielding two pistols during the last stand. Colonel William Travis (Laurence Harvey) also wields one during the fighting.

General Sam Houston (Richard Boone) with a dress pistol in his holster.

Capt. Almeron "Dick" Dickinson with a flintlock pistol in his holster.

Crockett blows the powder out of the flashpan to render the weapon useless.

Crockett and Bowie sneak past a Mexican camp in the river while holding pistols.

Bowie wields a pair of flintlock pistols in his final moments.

Jim Bowie (Richard Widmark) carries a 7-barreled Nock Gun as his main weapon in the film.

The immense muzzle flash of Bowie's Nock Gun as he fires it, taking out multiple Mexican soldiers in one shot. 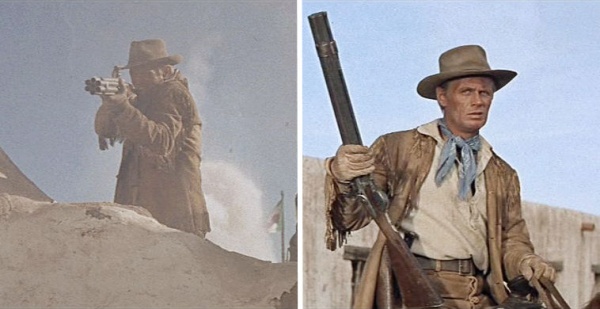 Bowie armed with his Nock Gun during the final battle at the Alamo.

Bowie guns down multiple Mexican soldiers with his Nock Gun during his final moments. Note that the weapon is much larger here than in other scenes, because this gun is meant to fire pyrotechnic charges that are safer at close ranges than blanks.

Some soldiers defending The Alamo use Trapdoor Springfield 1873 rifles mocked up as flintlock rifles, likely due to the ease of using metallic blank cartridges instead of blank shot.

An Alamo defender fires a Trapdoor Springfield mocked up as a flintlock rifle.

A mocked up Trapdoor Springfield circled in red in a rifle line up.
Retrieved from "https://www.imfdb.org/index.php?title=Alamo,_The_(1960)&oldid=1485561"
Categories: