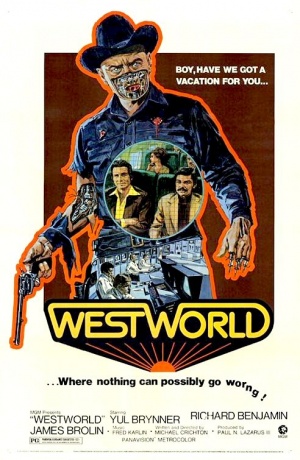 Westworld is a 1973 science fiction film written and directed by Michael Crichton. The film follows three guests who visit a futuristic theme park which has recreated the Old West using ultra realistic androids. The guests then find themselves having to escape the theme park when one of the gunslinging androids malfunctions and begins killing guests. The cast included James Brolin, Richard Benjamin, and Yul Brynner as the Gunslinger, a role which pays homage to his character in the film The Magnificent Seven (1960). The film would spawn the 1976 feature film sequel Futureworld and two television series adaptations, 1980's Beyond Westworld and an HBO adaptation which premiered in 2016.

The following weapons were used in the film Westworld (1973):

The Artillery model of the Single Action Army is the main revolver used in the film. It's seen in the hands of Peter Martin (Richard Benjamin), John Blane (James Brolin) and the Banker (Dick Van Patten). All of the firearms in Westworld are described as having high-tech safety devices that prevent them from being fired when aimed at anything with a high enough body temperature (i.e. guests at Westworld) while still allowing them to be fired at the androids populating the park. Prop-wise, this safety is visible on the revolvers as a metal cylinder attached to the frame just below the barrel.

Several models of the SAA are seen on the table.

The Gunslinger (Yul Brynner) is seen using the Cavalry model of the Single Action Army revolver.

The Gunslinger (Yul Brynner) is shot while holding the Cavalry model of the Single Action Army revolver.

A small number of Colt Model 1878 shotguns (most with shorter coach gun length barrels) are seen around Westworld.

A stage coach carries the new guests into Westworld. The driver is armed with a Colt 1878 shotgun.

John tries to talk the sheriff (Terry Wilson) into releasing Peter. Note the double-barreled shotguns on the gunrack.

Another angle of the sheriff's arsenal.

The Gunslinger is also seen using Winchester Model 1892 rifle when hunting for Peter Martin. Several other 1873 rifles can be seen inside the sheriff's office.

John tries to talk the sheriff into releasing Peter. Note the Winchester rifles on the right side of the gun rack.

Another angle of the sheriff's arsenal.

The Gunslinger with a Winchester Model 1892 while hunting for Peter Martin.