Tiger: An Old Hunter's Tale, The

The following weapons were used in the film The Tiger: An Old Hunter's Tale: 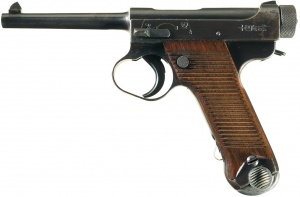 An Imperial Japanese Army officer with the holstered handgun.

A Nagant M1895 appears in the hands of Imperial Japanese Army officers (a rather strange choice for the Japanese military). Most likely, a single movie prop was used.

Nagant M1895 Revolver - 7.62x38R Nagant. This example was dated 1939 manufacture and was a war-time issued weapon. Note the angular front sight which was used from 1930s.

An injured officer reaches for the Nagant.

An officer pulls the Nagant...

The same officer raises his Nagant at the tiger.

The musket is aimed by Chun Man-Duk.

Chun Man-Duk about to fire his musket.

Goo-gyeong aims his musket. Chun Man-Duk carries a similar musket on a sling.

The flintlock of a musket is seen when Chun Man-Duk investigates it.

At least two Matchlock Muskets are lying on the ground after the hunt for the tiger. 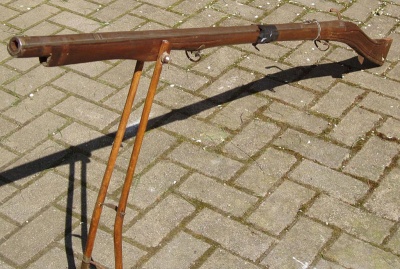 Another musket is seen in the background.

Young Suk-yi (Kim Ye-jun) owns a toy musket during the prologue set in 1915.

The "musket" is seen in the hands of Suk-yi.

Suk-yi (at the left) carries his "musket" on the sling.

At least one Korean hunter is armed with an Winchester Model 1887.

Winchester 1887/1901 shotgun - 10 gauge. This is the hero gun for Paul Newman in the film The Life and Times of Judge Roy Bean.

The tubular mag (pointed by the red arrow) can be seen.

A similar-looking gun is pointed by the red arrow.

The hunter grabs the gun.

The gun is pointed by the red arrow).

Nearly all Imperial Japanese Army soldiers, as well as several Korean hunters, are armed with the Arisaka Type 38s.

Military officer Ryu takes the Arisaka from the soldier.

Suk-yi grabs his Arisaka from the snow.

Suk-yi's Arisaka lies on the ground.

Imperial Japanese Army soldiers fire their Arisakas at the tiger.

A good view of the Arisakas in the hands of Imperial Japanese Army soldiers.

The bayonet-equipped Arisakas are fired by the Imperial Japanese Army soldiers.

A closer view of the bolt.

Most of Korean hunters, including Goo-gyeong (Man-sik Jeong), use Mosin-Nagant M91s throughout the movie.

A perfect view of the Mosin-Nagant bolt, when Goo-gyeong charges his rifle.

Goo-gyeong about to fire his Mosin-Nagant.

A Korean hunter fires his Mosin-Nagant.

A Korean hunter (2) aims the Mosin-Nagant, while another hunter (1) aims the Arisaka.

A Korean hunter (1) aims the Mosin-Nagant, another hunter (2) aims the Yugoslavian Mauser, and hunter (3) aims the Arisaka.

Goo-gyeong and another hunter (both 1) aim the Mosin-Nagants, while Chil-goo (2) aims a Lee-Enfield.

The mag of a Mosin-Nagant can be seen at the right.

What appears to be a Lee-Enfield No. 1 Mk III is seen in the hands of Chil-goo (Sang-ho Kim) and several other Korean hunters.

The Lee-Enfield carried by a hunter.

Another view of Chil-goo's Lee-Enfield. The hunter at the right aims the Mosin-Nagant.

Goo-gyeong and another hunter (both 1) aim the Mosin-Nagants, while Chil-goo (2) aims Lee-Enfield.

An injured hunter (2) holds the Lee-Enfield, while another hunter (1) holds the Arisaka.

Chil-goo puts his Lee-Enfield on the ground.

Chil-goo climbs on the mountain with Lee-Enfield on a sling. The Imperial Japanese Army soldiers carry Arisaka rifles.

At least one Korean hunter uses an M48 Yugoslavian Mauser.

A hunter at the background holds the Yugoslavian Mauser (pointed by the red arrow). Chil-goo (far right) carries a Lee-Enfield on a sling, Goo-gyeong and other hunters are armed with Mosin-Nagants.

A hunter in the background holds a Mauser (pointed by the red arrow). The mag of a Mosin-Nagant can be seen at the right.

The barrel of a the rifle can be seen.

The Mauser is charged by the hunter.

A better view of the same rifle.

The rifle is pointed by the red arrow. 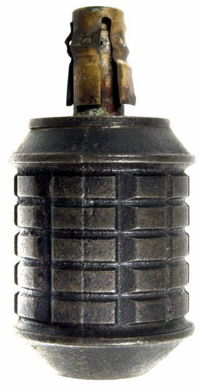 Another soldier with the grenades on his belt.

A grenade is pointed by the red arrow. An officer in the background carries a holstered Nambu.
Retrieved from "https://www.imfdb.org/index.php?title=Tiger:_An_Old_Hunter%27s_Tale,_The&oldid=1515532"
Categories: