From Internet Movie Firearms Database - Guns in Movies, TV and Video Games
(Redirected from The Hills Have Eyes)
Jump to navigation Jump to search 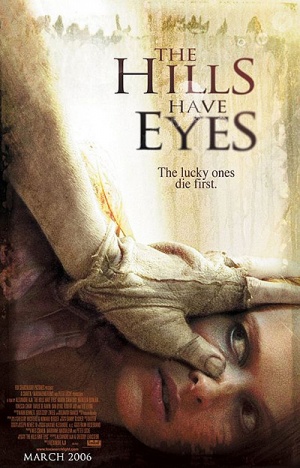 The Hills Have Eyes is a 2006 remake of the 1977 Wes Craven-directed film of the same name. The remake was directed by Alexandre Aja (Piranha) and stars Ted Levine, Kathleen Quinlan, Aaron Stanford, Dan Byrd, Vinessa Shaw, and Emilie de Ravin as the doomed family who encounters the mutants in the hills. A sequel to this remake, The Hills Have Eyes II, was released in 2007.

The following weapons were used in the film The Hills Have Eyes:

The Beretta 8045 Cougar is used throughout the movie by Bobby Carter (Dan Byrd). He uses it to shoot at the two mutants who kill Lynne and Ethel Carter and also to shoot Papa Jupiter (Billy Drago) when he is rushing toward him. Despite having the massive aperture of a .45 ACP pistol, the blanks are not full load and the sound effects are that of a smaller caliber round, leading some to believe it is a 9mm pistol. 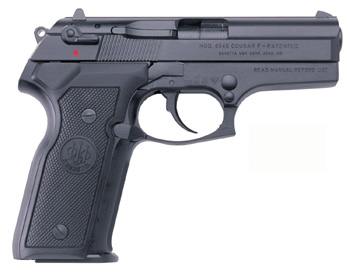 Bobby Carter (Dan Byrd) shows off the large .45 ACP barrel of his Beretta 8045 Cougar when he is target shooting.

Bobby fires at Pluto and Lizard, but only manages to waste ammunition.

A stainless steel Taurus Model 66 is first used by Bob Carter (Ted Levine). He fires four shots before being captured by Jupiter. Later, it is used by Lizard to kill Lynne and Ethel Carter. He attempts to shoot Bobby's sister Brenda with it, but it clicks empty, causing him to drop it and run away- a nice detail as the revolver had been discharged six times in total at this point. 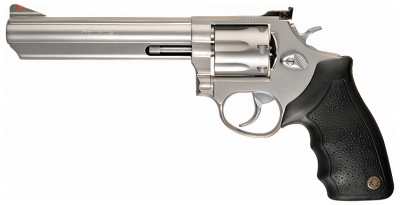 A close-up of the Taurus Model 66's muzzle.

The High Standard Model K-1200 Riot Deluxe Model is first in the hands of the gas station attendant (Tom Bower) After he shoots himself with it, it is picked up by Cyst (Gregory Nicotero). Later in the movie, Doug (Aaron Stanford), after killing him with the pickaxe, takes the shotgun from him and later uses it to shoot Lizard (Robert Joy) several times at the end of the movie. The shotgun switches between a live firing model and a welded up (formerly live model). Welding up the firearm renders it permanently inoperable and is thus regarded as a mere prop firearm (no armorer needed). Apparently Hi Standard shotguns were so prone to breaking that many that were unrepairable were welded up and kept in inventory as 'non-firing deactivated weapons'.