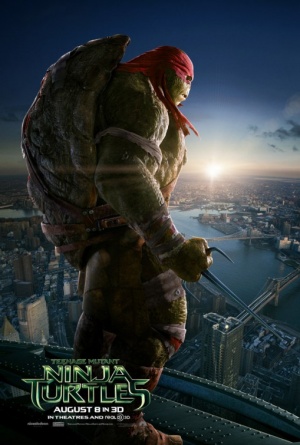 Teenage Mutant Ninja Turtles is the 2014 live action "reboot" of the popular comic book series created by Kevin Eastman. Unlike the 2007 film TMNT, which was completely CGI, this feature was primarily live action, with the Ninja Turtles being portrayed via motion capture technology. The film was produced by Michael Bay and Megan Fox stars in the film as April O'Neil. This feature would spawn a 2016 sequel, Teenage Mutant Ninja Turtles: Out of the Shadows.

The following weapons were used in the film Teenage Mutant Ninja Turtles (2014):

The M4A1 is seen in the hands of Foot clan soldiers who threaten subway riders.

Some of the Foot clan soldiers appear to be armed with SIG-Sauer 516 Patrol rifles fitted with EOTech sights.

Karai (Minae Noji) is seen using what appears to be a SIG-Sauer P226 during the subway fight.

The Mk 19 grenade launcher is seen mounted on a Humvee.