Be sure to look over the changes I've made to get a better understanding of proper page formatting and categorizing.--PistolJunkie 20:03, 23 December 2011 (CST)

Hmm, a prequal to the Alien series? Let me guess. The plot should go like this judging by the trailers: the crew of Prometheus, who are watched by the Weyland company from the Aliens quadrilogy, are on some sort of archeological discovery about ancient human civilizations being aware of the existence of alien life forms, which are in fact the Space Jockeys. The Space Jockeys are what appears to be members of an ancient empire that died off many years ago. Whatever was left of the empire retreated to LV-416. They embark on a journey of discovery and find LV-416. There, they discover the Space Jockeys' habitat. After the first encounter with the Space Jockeys' habitat becomes chaotic (possibly one of the crew becomes impregnated or something as in Alien), they discover the derelict spacecraft from Alien. They learn that the Space Jockeys are planning on shipping unhatched "facehungers" to Earth using the spacecraft and destroy Earth with these biological weapons. Whatever is left of the crew then sacrifice themselves to prevent the spacecraft from departing LV-416. Before they die, a transmission is sent from the planet as a warning to humanity. The transmission cuts short due to some other problems and Weyland keeps the information of this whole mission in secret. Then, several centuries later, Weyland decides to recover whatever Prometheus collected and sends their best crew, Ripley's mining team, over to the planet while disguising this "special mission" as a typical mining operation. To make sure it progresses well, they insert an android named "Ash" into Ripley's team and commands Ash to do whatever is necessary to retrieve their "package", even at the expense of the crew's lives. From there, it sets the stage for the Alien quadrilogy. The End. - Kenny99 03:03, 13 May 2012 (CDT)

So by that logic in barely half a century, this awesome and very contemporary rifle that was made for the new movie prequel, turns into the Pulse Rifle, which looks like what the 80s thought future weapons will look like. Though to be honest, the Storm Rifle looks like the Pulse rifle in a different color scheme with a longer barrel and an optic, and it first 5.56 instead of 10mm. Excalibur01 11:32, 18 May 2012 (CDT)

"Alien" was suppose to take place right after the United States Tricentennial. That is what the red and white triangular shaped patch on their uniforms represented. Depending on the travel time in suspended animation (in the Aliens universe, it takes time to travel between the stars), about 2077 to 2079 is when "Alien" took place, a century after the movie was filmed. --Krel 21:17, 18 May 2012 (CDT)

No, many canon sources state that "Aliens" & "Alien 3" are set in 2179. Ripley had been drifting for 57 years since "Alien" so that gives you the year 2122. Regardless of whether Ridley Scott intended Alien to be set in 2079, subsequent films gave a specific date for their setting, therefore it is easy to give "Alien" a definitive date by working backward. It can be assumed that Ridley Scott then moved his original "Alien" date of "late 21st century" to this movie in order not to break established canon. --Burton123 06:06, 20 May 2012 (CDT)

Yes, the costume designer says that the patches commemorated America's Tricentennial, and I believe that it was also stated as such in the making of Alien book. Although I don't believe that the movie ever stated a year, just that they spent an extra ten months in transit, with the same going home. But I'm going to be obstinate and stick with the costume designer, 2079. :) --Krel 23:39, 21 May 2012 (CDT)

Fair enough, but the evidence as stands has been thoroughly researched & compiled from multiple sources here: http://time.absoluteavp.com/index.html

Wow! I thought that, that site went away years ago, thanks. I don't think that you can really compare the time line of this movie to "Alien" films. I have read that Ridley Scott has said that it isn't a prequel to "Alien", but rather a movie that uses the Alien universe, but with changes. --Krel 22:38, 24 May 2012 (CDT)

According to official Weyland Industries website made to promote the film, Weyland-Yutani Corporation made some significant breakthroughs in firearm technology during the XXI century, all incorporated in its signature Storm assault rifle, marketed worldwide and supplied to Colonial Marine force. Firstly, they somehow perfected the barrel rifling method in 2024, resulting in triple the speed and double the accuracy of conventional rifles. Secondly, Weyland introduced a targeting system that is able to identify and track its targets 500 km away, and also compensate for any and all ballistic factors (including different atmospheric pressure and density in off-world environment). Thirdly, a new 5.56 round was developed, with a bullet made of off-world materials (or, alternatively, uranium carbide) and able to travel quickly and almost indefinitely. The «modern» Storm rifle of 2073 is extremely light (1.3 kg), being made of micro-perforated titanum alloy, and is supposedly equipped with an underbarrel pump-action 30mm grenade launcher. Otherwise, it is quite conventional and somewhat cumbersome, with a long barrel, massive high-capacity magazine and a partly collapsible stock. It is modeled after the also fictional M41A Pulse Rifle used in James Cameron's Aliens film (which is in turn based on a M1A1 Thompson with cut-down Remington 870 shotgun and plastic molding added), although with a «civilian-length» barrel. 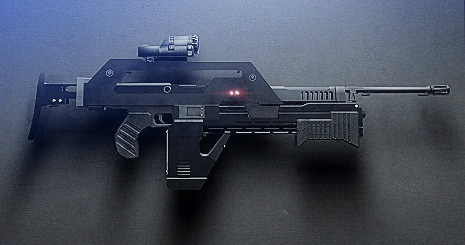 Secondly, Weyland introduced a targeting system that is able to identify and track its targets 500 km away, and also compensate for any and all ballistic factors (including different atmospheric pressure and density in off-world environment). Thirdly, a new 5.56 round was developed, with a bullet made of off-world materials (or, alternatively, uranium carbide) and able to travel quickly and almost indefinitely. The «modern» Storm rifle of 2073 is extremely light (1.3 kg), being made of micro-perforated titanum alloy, and is supposedly equipped with an underbarrel pump-action 30mm grenade launcher

Please tell me someone isn't serious. Am I supposed to belive that a rifle is able to track a target 300 miles away??? That's way, way, over the horizon. And 1.3 kg weight? Is it made of air? That's less than 3 pounds, or slightly heavier than an M1911 and lighter than any rifle in history. What idiot wrote the specs on this thing? Does it have a "barrel thing that goes up" as well?--Mandolin 18:18, 24 May 2012 (CDT)

I didn't see it. The only weapons I saw were the pistols, the shotgun and the flamethrower. Unless it was hidden in the background somewhere (unlikely) I'd say it's just some idiot who's posted it on here because they think it makes them cool. The image looks fake anyway. --Leigh Burne 11:44, 6 June 2012 (CDT)

Well, it is featured on the website made to promote the movie http://www.weylandindustries.com/security (bottom right). Of course, it doesn't mean it's actually going to be in the movie. And the "500 km" part is really pushing the fiction part of sci-fi... -Sentient6 13:15, 6 June 2012 (CDT)