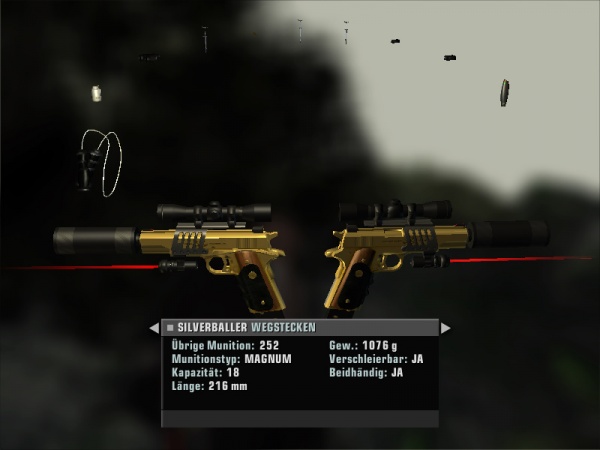 If they weren't ridiculous enough for you, the Silverballers can also be gold-plated with a mod.

To whoever replaced the Sig 552 image:

The Sig 552 picture was good enough. That other picture is horrible.

The SLP .40 is not the compact. I own both pistols and look at the inventory, it is definantly the full size. It has the trigger guard of the full size and does not have the extended magazine floorplate that the compact does. As to caliber this is uncertain, as the game suggests that it could either be a 9mm, .40, or most likely a .45.

Hmmm, I noticed a lot of pistol in the game have red three dot sights for some reason, oh and the MP7 in game is the HK MP7 prototype (PDW) not an MP7A1, check it out. link Do we have any picture of the H&K PDW aka MP7 prototype on this site? Also, the MP7 in Half-Life 2 is modeled after the PDW not the MP7A1.

Too hot for this wiki?

I have a copy of this game for the PC, and came up with something that might be considered risque when making screenshots for the wiki entry. Here's something I'd like to put up for your (dis)approval: 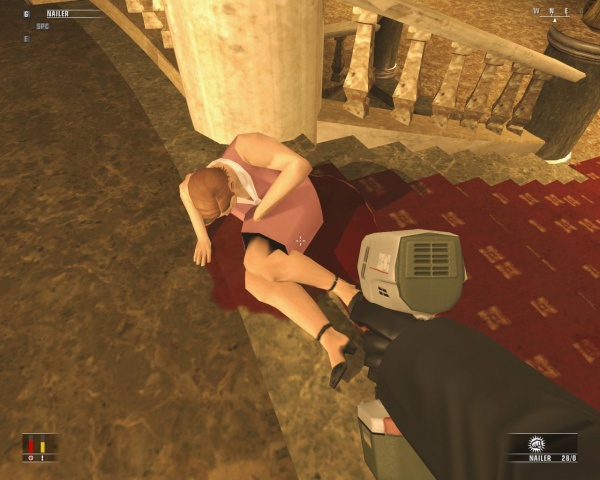 "Are you expecting your period?"

In the game, the Nailgun is pitifully weak barring headshots, and NPCs who are shot enough times bleed out their lives on the floor. I did not mod or cheat my game to achieve this. --Mazryonh 01:51, 10 August 2010 (UTC)

You need to shoot them like six times on rookie and even more on higher difficulties.

Is the Snubnosed Revolver in this game actually a S&W Model 686? The ingame version is pretty weak for something that's supposed to be chambered in .357 Magnum, though of course even the HK USP chambered for .45 ACP acts more like a 9x19mm FMJ firearm with regards to stopping power in the game. Or is the Snubnosed Revolver actually just a S&W Model 686 loaded with .38 Special ammunition instead of .357 Magnum?--Mazryonh 14:37, 20 August 2010 (UTC)

Other than the traditional handcannons all guns are really weak, the M14 takes four shots to kill (Sniper Rifles using the same caliber ammo are instant kills but no carry cases for them), non custom assault rifles 5, handguns and smgs upto 6. Not to mention very inaccurate. Its the developers' way of saying 'we have put too much efforts in designing your custom guns and we want you to use them only'. --Devang.dn 21:24, 11 January 2011 (UTC)

The page looks much better than before with the handguns and rifles section having been updated, just complete it with screenshots of the WA2000. I unfortunately don't own the game presently.

Looks a lot more like a WW2 era MKIV to me.

Can someone expert in both firearms and HBM give an real-life vs in-game summary of the upgrades[1] available in the game? Somewhat along the lines of separating the real from hollywood, like is it possible to silence a shotgun, the level 2 suppressors, people flying when hit by 'magnum' ammo, how the lightweight frame for the Walther makes it easier to hold steady in a standing position but should also increase felt recoil, just what is a carbon fiber barrel, etc. It would be cool if that is included in the main article too. Two questions; doesn't low velocity ammunition mean heavier bullets and lesser powder? Why does this reduce damage so much? Does low vel ammo cycle reliably in self loading firearms? Will the spring have to be modified for the same?

I'll answer what I can: