I'm not familiar with this model of sig, but it looks to me like they chopped up the frame to make the gun fit in energy drink cans, and then glossed over Travolta re-assembling the gun in such a way as to not explain how the hell the grip goes back on.

he took off the screw on grip covers, then chopped the frame of the grip, then when he reassembled it the grip covers must have held it together.

Or a badass bald with bad temper User:Kliwher

The sights would be on the other side if he was holding it backwards, although it appears the plastic "jaws" inside the tube are missing. - Gunmaster45

A French Police officer and some of the Chinese thugs are seen with unidentified pistols.

I haven't seen the film. Whoever wrote about it in article, did you mean a Russian special pistol? Or Walther PPS maybe? 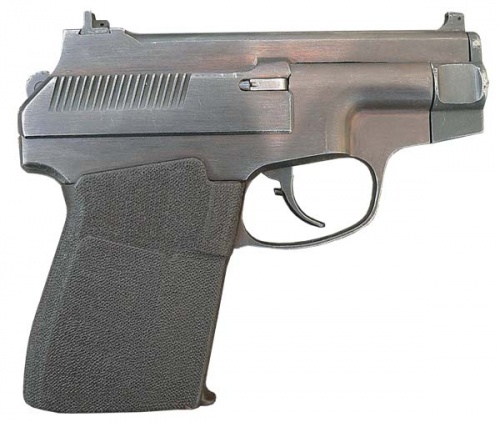 Ok in response to your claim on the Beretta PX4 storm. I remember that Johnathan Rhyse Meyers clearly states that he had a 9mm in the trunk (referring to the PX4 storm )

The Steyr pictured is the original Steyr M9. The weapon used in the film is the M-A1 version in the picture below.

I havent seen the movie for a while, i was wondering does anybody know what calibre reese's desert eagle is? EoghanG93 19:13 gmt. 2nd november 2011.

The following poor quality screenshots were uploaded in November 2010 and therefore never appeared on the page.