But I thought some of you might get a kick out of this:

That's hilarious. Horatio is such an annoying character, this comic sums him up nicely. - Gunmaster45

Don't know why but the Tiki-T had disappeared since last time.

Also, saw a couple things in an episode (recent one, where Delko's living in a hotel and there's a hit attempt on him)

Man fires a revolver (unidentified, need help) and then throws it over a building. It discharges when it hits the ground, apparently having the ability to fire on an empty chamber. Also, during reconstruction of a separate gun used in the hit attempt, it is stated " definitely a different gun, at least 200 grains here, a .38 can get no bigger than 180" or something along those lines, funny I saw 200gr. lead rounds on sale.

Seriously, the Tiki T was delted again and by a non-user, just Ip adress. Seriously, can we lock this page from outside users or something?

Does anyone understand the last three sentences in this description?

-Yeah, it's jsut talking about rediculous Miami gun mistakes, once there was audio of a murder. Calleigh asked to replay the cocking noise of the gun and said that it was a sound unique to the gp-100 and that it's rare. There was also a picture of a 10/22 on the computer screen and it was stated that its 223 caliber.

Actually, in the episode in question involving the GP100, Calleigh is briefly held at gunpoint by Det. John Hagen, who was holding the GP100. Later, she and another lab tech thumb-cock several pistols (as was done to her) until she encounters the same sound and IDs the gun. Now, it being rare? Not a chance. --Clutch 00:34, 15 June 2009 (UTC)

Why the hell does he use a right handed grip with his left eye? The Winchester

Why does everyone opt not to wear body armor, and why does he make an effort to look away when talking and only say one liners? Or play with sunglasses whole episode? Do real cops kill 50 people during their career?

Q 1 : Hand and Eye Dominance. Right hand being dominant and his left eye the dominant one. Nothing unusual for those of us which have such a condition.

Q 2 : That is, IMHO, part of the whole David Caruso personana, the looking away, one liners sunglasses, hands on hips posing that defines the Caine character. Personally, his character is at the bottom of the pile of interesting for me.

Also, take note how he'll cock the hammer of his SIG before shooting, fixing Cooper's observation of the "problem" of DA semi-autos...LOL - BC2009

I have it to where my left hand is dominant but my left eye is really near sighted and I can't shoot worth a damn right handed but the vision in my right eye is wonderful. It sucks pretty bad when I try to shoot unscoped long guns-S&Wshooter 23:57, 14 October 2009 (UTC)

Someday the slide's going to hit his glasses.

Can anyone see if a P226 was used in the whole scene, or just for that reload.

Also, Could this be added to the page, or is it a continuity error?

On the top of my head I can figure two ways how to explain a converted Glock could fire rounds stamped with ЛЗК [star] 1969 [star]:

1. Somehow that corporation got its hands on Soviet-manufactured 9mm Para. Problem is, for 37-year-old ammo to survive that long, it must be pretty abudant, and in USSR that meant it was military-ussue. But RKKA/Soviet Armed Forces/VS RF use(d) the following cartridges: the one for Nagant, 7.62 Tokarev (1930), 9.25x18 Makarov (1948) and 9x19 Para (2003). Before the introduction of Yarigyn the Parabellum was really a rear sight - not something abudant enough to make the described scam scheme. 2. That idiot somehow loaded the Glock with Makarov ammo, explaining why it would jam. But that's too simple of a scam scheme. 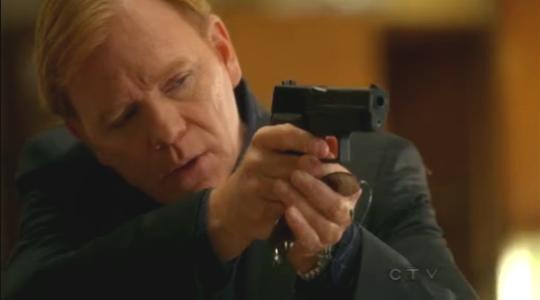 Is this a Non Gun?

I KNOW!!!!!!!!! I seriously thought NY would be the one to go, but nope! CBS confuses me sometimes- Miami had superior ratings, profits, and syndication deals. NY, on the other hand, had not-so-great ratings. Oh well, it was a good run. Hopefully NBC or someone picks it up for a final season, because Season 10's finale SUCKED. To be honest though, Miami's plots had been a little outlandish and hard to believe lately. Maybe it was time for it to go...----JazzBlackBelt-- 16:28, 14 May 2012 (CDT)

Possiblly because it was shoot on location, that's normally the most expensive thing in the production.--Dillinger 01:54, 16 May 2012 (CDT)