Son of a Gun

Son of a Gun is a 2014 crime thriller written and directed by Julius Avery (Overlord). Brenton Thwaites stars as JR, a young criminal who falls under the sway of notorious armed robber Brendon Lynch (Ewan McGregor) while serving a short stint in prison. JR later breaks Lynch out of prison, and joins him for a gold heist orchestrated by crime lord Sam (Jacek Koman). As JR becomes more involved with Lynch's gang, he becomes torn between his loyalty to Lynch and his attraction to Sam's girlfriend Tasha (Alicia Vikander).

The following weapons were used in the film Son of a Gun:

JR (Brenton Thwaites) finds a Tanfoglio Stock III pistol in Lynch's suitcase. The pistol is later extensively used by Lynch and JR throughout the film. 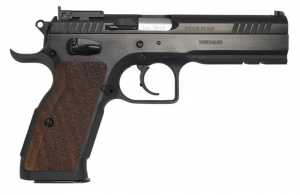 JR fools around with Lynch's gun.

JR aims the pistol during the gold heist.

Lynch fires the Tanfoglio Stock III during a shootout.

The Beretta 92FS Inox is used by Sam Lennox (Jacek Koman). A henchman also uses a Beretta when confronting Lynch.

A henchman holds Lynch at gunpoint with a Beretta.

A Glock 17 is retrieved from a security guard.

WA Police aim their weapons at the thieves.

An officer tells his men to lower their weapons.

A Russian mobster uses a Glock 17 converted to full automatic with an extended magazine during a shootout.

The mobster fires a Glock 17 with an extended magazine during the shootout.

JR acquires a Heckler & Koch MP5K from Wilson (Damon Herriman) which he uses to hijack a helicopter to free Lynch from prison.

JR threatens a helicopter pilot with the MP5K.

A prison guard with a Remington 870 dodges gunfire during the prison break.

A police officer fires a Remington 870 at the fleeing thieves.

Police officers confronting Lynch and JR at the gold mine wield Remington 870s with rifle sights and SureFire forends.

An officer aims a Remington 870 as the thieves use a group of hostages as cover.

WA Police aim their weapons at the thieves.

Sterlo (Matt Nable) uses a Remington 870 with a sawn-off barrel and stock during the gold mine heist.

Sterlo holds hostages at gunpoint with a Remington 870.

Sterlo opens fire as the thieves make their escape.

Josh (Tom Budge) uses a Ithaca 37 "Stakeout" shotgun during the gold mine heist.

Josh threatens a hostage with a Ithaca 37 "Stakeout".

JR acquires a M4A1 Carbine with a number of accessories including an ACOG sight, foregrip and Ace SOCOM stock from Wilson. JR and Lynch use the M4A1 throughout the film, most notably during the gold heist. Tactical Response Group (TRG) officers from the Western Australia Police also use M4A1s.

A row of M4A1 carbines in Wilson's arsenal.

Lynch fires the M4A1 while fleeing from the heist.

Wilson fires the F-88A1C from the hip.

Three AKMs can be seen behind JR.

Romanian AIMR carbines can be seen among the AKM rifles.

An Accuracy International Arctic Warfare Magnum rifle can be seen in Wilson's arsenal.

An AWM rifle sits on a table behind Wilson.

TRG snipers use what appear to be Remington 700 rifles while conducting a raid.

Wilson provides JR with a M60 machine gun with a MK 43-style handguard and an ELCAN sight. 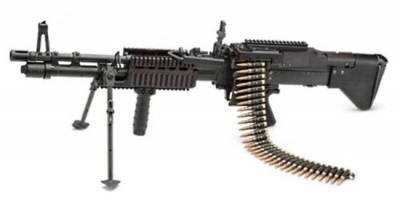 Wilson brandishes a RPG-7 launcher while selling weapons to JR.