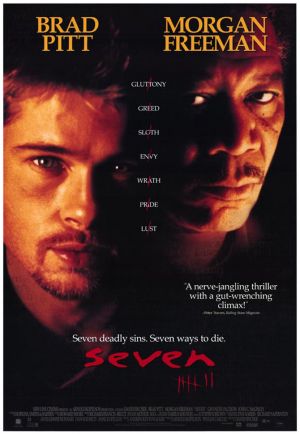 Se7en (aka, Seven) is a 1995 police crime thriller directed by David Fincher that stars Brad Pitt as David Mills, a young detective new to working downtown homicide who is partnered with Lt. William Somerset (Morgan Freeman), a veteran detective who's seen too much and only has a few days to retirement. Together, they try to crack the case of a serial killer who uses the Seven Deadly Sins (Gluttony, Greed, Sloth, Lust, Pride, Envy, and Wrath) as his inspiration. The film's dirty, violent, dreary and large metropolitan setting is intentionally never told, as "the city" is supposed to be a fictional, more noir version of New York City. Police Technical Advisers were on the set at all times to correct the actors, which explains the exceptional gun handling seen throughout the film.

The following weapons were used in the film Se7en:

WARNING! Due to IMFDB requiring actors be identified as well as the weapons they are holding, this page contains MAJOR SPOILERS!

Somerset spins the loaded cylinder and swings it shut (something wheel-gun lovers cringe at).

Somerset (Morgan Freeman) draws and fires a shot into the air with his Smith & Wesson Model 15 to get the delivery man to stop his van. According to Somerset's history provided in the film, this is the first shot he ever fired in the line of duty. Note how he draws the gun with his finger off the trigger, which Freeman was told to do by the police technical advisors on the set after he drew his gun with his finger on the trigger originally.

Somerset holds his Model 15 on the delivery man. 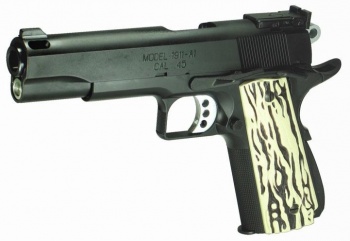 An airsoft reproduction of the Springfield Armory M1911-A1 made by J-Armoury (Western Arms) used in the film.

Mills drops prone with his Springfield Armory M1911-A1 after John Doe opens fire on him and Somerset outside his apartment.

Mills searches for John Doe in the apartment building while keeping an excellent grip and good trigger discipline on his Springfield Armory M1911-A1.

Mills aims at John Doe from an apartment window.

A beautiful shot of Mills' M1911-A1 as it is thrown into a puddle when he is hit in the face by a crowbar.

Close up on Mills' Springfield Armory M1911-A1 as it is fired, showing the compensation slots.

A blued Taurus PT99 AF with wood grips is used by John Doe (Kevin Spacey) when Detective Mills (Brad Pitt) and Detective Lt. William Somerset (Morgan Freeman) go to his apartment. One could argue that the weapon is a similar Beretta 92FS with custom sights and grips, but there is no ambidextrous safety/decocking lever on the slide, making this weapon for certain a Taurus. One of the murder victims is described as having bruises from the muzzle and front sight of Doe's pistol on their head, which seems unlikely since the barrel protrudes significantly past the muzzle, distancing the front sight from the barrel. However, it is also possible that Doe, being independently wealthy, simply used a different gun on that victim. 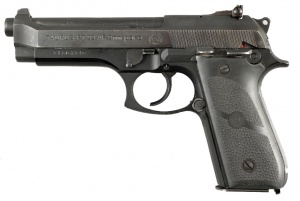 A beautiful shot of John Doe holding his Taurus PT99 to Mills' head. If you look closely, you can notice that the markings on the slide resemble that of an early production Taurus PT92/99, not a Beretta 92 series pistol.

An excellent side shot of Doe's Taurus PT99. Note raised adjustable sights and wooden grips. Note also the lack of a slide safety, indicating it is a Taurus rather than a Beretta 92FS.

The city's SWAT officers are seen with unknown M1911A1-series pistols in their tac-vest holsters. Since SWAT team 1911 models varied heavily in the '90s, they could be multiple types.

The SWAT officers have M1911A1 pistols in their holsters, circled in red.

The city's police officers in the film carry Glock 17s as their issued sidearms.

An officer outside the apartment building of the third victim is seen with his Glock 17 drawn, right.

Officers walks by with Glock 17s in their holsters.

Officers at the police station aim their Glock 17s. 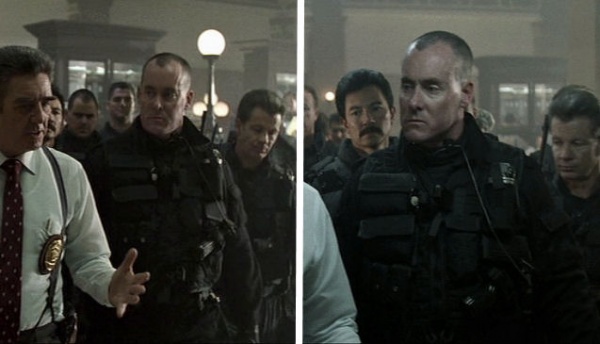 California with a Beretta 92FS in his holster.

A SIG-Sauer P226 is seen in Detective Taylor's (Daniel Zacapa) holster at the first crime scene in the film.

Detective Taylor with a SIG-Sauer P226 in his holster.

Police Captain Lucas (R. Lee Ermey) has an unknown revolver in his hip holster. It is never seen clearly enough to identify.

Police Captain Lucas (named determined by early draft of script) with an unknown revolver in his holster.

Heckler & Koch MP5A2s with Navy trigger groups and Surefire 628 forend weaponlights are used by the SWAT team when they breach the apartment and find the serial killer's third victim.

A SWAT officer climbs the fire escape with a Heckler & Koch MP5A2 slung.

A SWAT officer armed with his MP5A2 Navy.

A SWAT officer clears the room armed with an Heckler & Koch MP5A2 with Navy lower. Based on his hand signals and weapon handling, it's safe to assume this is a real SWAT guy.

A SWAT officer guards the entrance with his MP5A2 at the ready.

A SWAT officer is seen with a Colt AR-15A2 Sporter HBAR slung over his back. This is the civilian version of the M16A2.

A SWAT officer with a Colt AR-15A2 Sporter HBAR slung over his back. Note heavy barrel and A2-style flashhider.

A SWAT sniper is seen using a Remington 700PSS sniper rifle fitted with an unknown scope during the final scene in the desert.

A SWAT sniper hangs from the door armed with a Remington 700PSS.

A good shot of the scope.

The sniper aims his Remington 700PSS.

Some of the SWAT officers, notably California (John C. McGinley), wield Mossberg 590 shotguns with tactical flashlights when breaching the apartment of the third victim. One is fitted with ghost-ring sights.

A SWAT officer with a Mossberg 590 with ghost-ring sights.

California with his Mossberg 590 at the ready.

Mossberg 500 shotguns are carried by police as they guard the vehicle during the transport of a prisoner. One is also seen in the front of the car driven by Detective Lt. William Somerset (Morgan Freeman) and Detective Mills (Brad Pitt).

In the background, a police officer is seen armed with a Mossberg 500.

A Mossberg 500 sits in the front of the car next to Somerset. Note the pump-action appears to be locked back in this shot.

A farther shot of the Mossberg 500.

California with an M18 smoke grenade in his tac-vest while riding the chopper in the desert.
Retrieved from "https://www.imfdb.org/index.php?title=Se7en&oldid=1449132"
Categories: