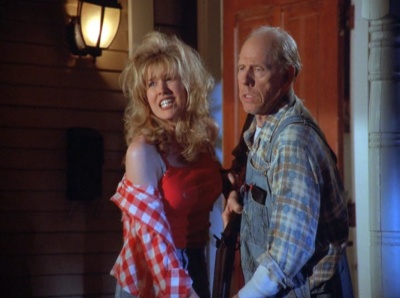 Rance Howard (1928-2017) with a Double Barreled Shotgun as The Farmer on Seinfeld.

Rance Howard (1928-2017) was an American actor who appeared in films such as Chinatown and Cool Hand Luke in addition to several guest-starring roles on television. He also was the patriarch of a multi-generational family of actors which included his wife Jean, his sons: actor/director Ron Howard and Clint Howard, in addition to his granddaughter Bryce Dallas Howard. His son Ron Howard has cast his father in several of the films he has directed, including Apollo 13, Far and Away, The Paper, The Missing (2003), and Angels and Demons. He passed away on November 25, 2017 at the age of 89.